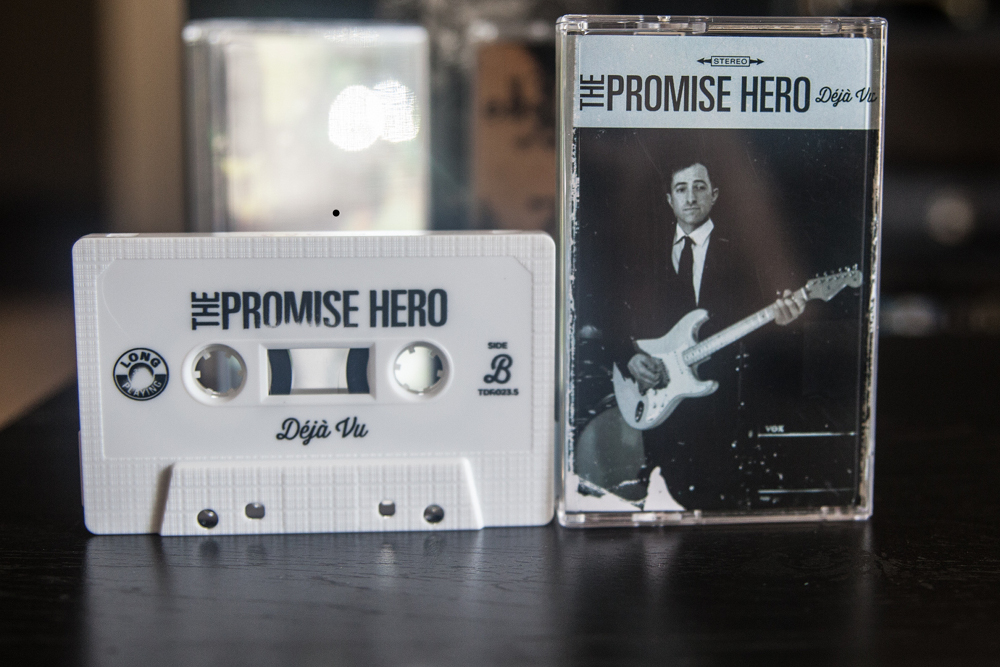 Cassette Corner is a column devised and constructed by Modern Vinyl contributor Matt Bergeron. Centering on his love for another vintage format, cassette tapes, Matt will be looking at the various and notable tape releases available (or previously available) to readers. This month, he’s looking at releases from The Promise Hero, Ronnie Dobbs and Edhochuli. Furthermore, Chris (the site’s owner/editor) will be looking at a cassette tape release from The Awkward Robot (which Matt had a hand in releasing, thus causing this additional writer).

From the start, The Promise Hero’s new full length effort, titled Déjà vu, is as close to bubble gum pop as an indie band can get. And while this philosophy creates tunes lacking the depth to truly resonate with someone out of their teens, it remains a fun listen. The lyrics are again lacking a bit of maturity, primarily being about being romantic distress and girls, but they do have the musicianship on lock. Upbeat guitars, precise piano work, and stellar drumming keep The Promise Hero from being lumped in with the myriad of new wave pop punk bands coming out as of late. The one bright ray of sunshine, featuring the complete package of both lyrical work and musicianship, is the one starting off the b-side, titled “Awake.” Lyrically we’re given a message of “Hey, life moves fast, you need to realize that and work around it.”

As far as the cassette is concerned, it’s a wonderful product. With a total of 50 copies pressed (25 blue, 25 white) each cassette has a rather large full color lyrics J-card. So If upbeat poppy acoustic songs about girls are your thing, this cassette comes highly recommended. Otherwise, I would give this one a pass.

Ronnie Dobbs – Everyone Is Not Attractive
Seizureman Records

The answer is Ronnie Dobbs, a glimmer of hope in this oversaturated market that is the music industry. Everyone Is Not Attractive, the five track EP from the group, is a fast paced rock-a-thon that is sure to get you, for lack of a better word, PUMPED. There really aren’t many other words to describe this band other than “holy crap, what did I just listen too? Play it again!”  Whether purposely or not, there is massive Bear Vs. Shark influence within the EP, and is done in such a way to not be deemed as a rip off. Finishing off this math/garage/punk rock masterpiece leaves the listener wanting so much more…..(insert internet meme of your choice).

It would be easy to say that Seizureman Records has outdone themselves with this release, but it’s their first! And I use an exclamation point with good reason my friends, as this is probably one of the best first cassette releases I’ve taken in at my time running Cassette Corner. Not only is there a download code included with this full color, 3-panel J card,  but we’re also given an extra insert with liner notes and extra artwork.  If we gave star reviews for cassettes, this would get a 5 out of 5.

Let’s talk about genre hopping, because Edhochuli has become quite proficient at it. While it’s apparent that the band may get lumped into the scream or hardcore category, this EP is so much more than that, spanning genres like hardcore, metal, mathrock, and even a little classic rock. Overall, this almost perfectly cohesive body of work rivals most “hardcore” bands coming out of the scene as of late. Hardcore for the non-hardcore listener.

One thing that’s so respectable about the first Two Seizureman releases is that they are all hand assembled and dubbed in house. It’s very apparent that serious care went into this release, because although it’s basic cassette packaging, it’s on par with some of the bigger labels putting out tapes.

For those looking to extend the summer a few more weeks, The Awkward Robot’s self-titled EP, recently released to cassette tape by Thunderbeard Records, represents a bright and inventive spin on the surf rock genre. The highlights come early and often, beginning with “Holy Land U.S.A.,” a track destined to put a smile on your face. From Jason Martins’ vocals, which possess a carefree breeze to them; to the sunny synth work from Javier Martinez, diving in and out of the hook; to the acoustic-driven melody, the track is guaranteed to get your toe tapping. “Ant Hill” stands as another great track, this time highlighted more for its lyrical honesty. Martins, utilizing some nature-based symbolism, sings in the especially heartbreaking hook, “Cause this is the deepest hole I’ve dug/To try and bury what I have loved/But I still cant hide it away/So I’ll just keep on tunneling/Until I say the right things/No matter how deep I dig my grave.”

Additional highlights include the ukelele work which seeps its way into “Settle Up The Score” and the entirety of “On A Stretcher,” which again, is a song made for the long airy drives of summer. The cassette release from Thunderbeard is quite standard, with a full color J-card showing off the artwork and tracklisting. Unfortunately, neither lyrics nor a digital download are included, though.