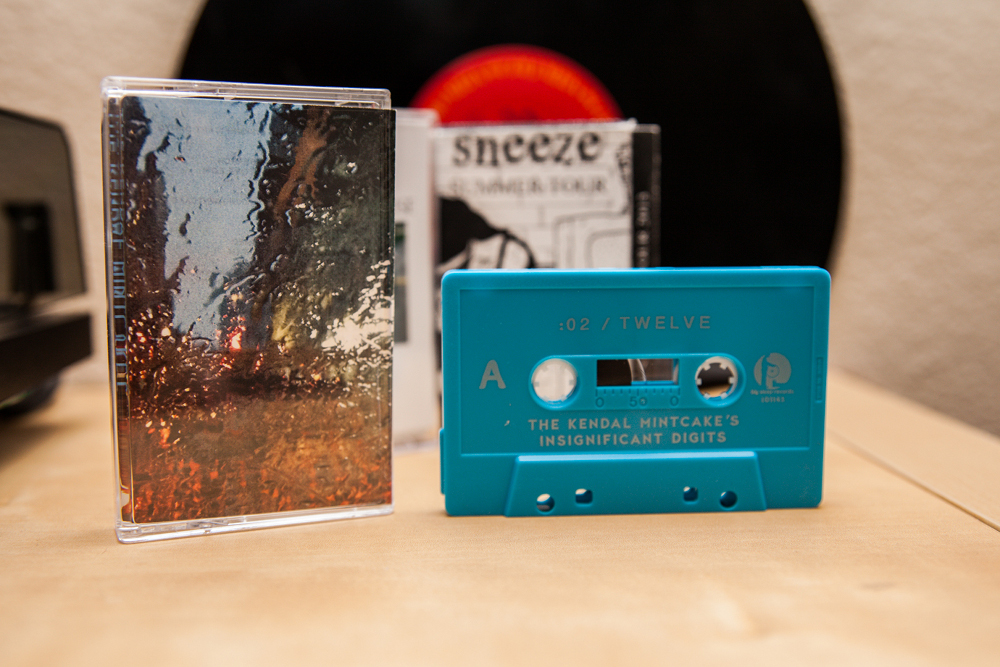 Cassette Corner is a column devised and constructed by Modern Vinyl contributor Matt Bergeron. Centering on his love for another vintage format, cassette tapes, Matt will be looking at the various and notable tape releases available (or previously available) to readers. This month, he’s looking at releases from The Kendal Mintcakes, Sneeze and Sorority Noise. And if you’d like to get involved in Cassette Corner, just email us at news@modern-vinyl.com.

Although cassettes seem to be typically associated with the punk world, there are many talented artists way outside that genre putting out quality releases on tape. The Kendal Mintcake’s newest release, for example, is an electronic gem, filled with ambient noise and samples galore. You don’t need to be a fan of EDM, or any sort of electronic music to enjoy these wonderful soundscapes, though. These four wildly experimental tracks, spanning over 34 minutes of tape, are profoundly thought provoking and awesomely intriguing. Now, this isn’t something you would put on at your next house party, but sitting alone at night and diving deep into Insignificant Digits is a task that comes highly recommended. “Twenty,” the strongest track on this release is fit for the next big horror flick, as personally, I can see the main characters of said movie being pursued by the villain while ultimately meeting their demise. The ability to project images into one’s head with your music is a daunting task, and yet The Kendal Mintcakes have managed to accomplish this with ease. It goes without saying that this is one of the most eerie and unique releases we have come across.

The packaging is fairly standard with a 3-panel J-Card housed in a standard case. The silver imprinting on the blue cassette is a nice touch on this limited release. I didn’t know what to expect before listening to this and I will say that I was pleasantly surprised.

I ended my review of Sneeze’s debut LP exclaiming my excitement for what they would release next, and fortunately, the wait wasn’t very long. The Massachusetts power trio has released a cassette containing demos exclusive to their 2013 summer tour. While these tracks will be polished up a bit and added to their next LP, this is a nice precursor to their upcoming effort. Not much has changed in the band’s sound since the release of I’m Going To Kill Myself, but that’s far from a bad thing. Still spitting out head banging garage punk, the summer tour EP is a gritty insight into their world. “Dirty Nap” kicks off the three track effort, while fans of Joyce Manor and Jawbreaker will immediately see a heavy influence. The fast paced drumming from Julian Moore keeps these demos alive with intensity and the lyrical honesty from frontman Derek is something to be admired.

The cassette itself is completely blank other than the handwritten numbers on one side. The release is limited to 50 cassettes and each is house in a thick-folded stock card case. While the material for the slip case is cause for some unavoidable damage, it’s safe to say this release, overall, is punk as f***.

Seems as though, now a days, every indie band has a few members with their feet dipped in countless other projects. In that vein, members of Old Gray and Two Humans have come together to create “Sorority Noise,” a delightful indie-pop outfit. Young Luck is a four-track cassette, filled with self-loathing subject matter draped over head bobbing bubblegum fun. Not much is setting bands apart these days, but Sorority Noise manages to break away from the slew of indie-pop bands with their “I’ll be sad if I want to” attitude and the unabashed metaphors that go on for days. In a particularly memorable section, they sing, “Cause all I’ll ever be is a gas station bouquet of roses/A last minute thought and a waste of air.” It’s also a refreshing notion to see that we aren’t just getting another EP that sounds exactly the same as their full time projects, a common occurrence for anyone following this scene. Overall, the EP is a very quick listen and although not a single track stands out as a “hit,” this is a satisfying release.

Broken World Media’s packaging is consistently solid, as well, with the EP is contained solely on the A side and a colorful label marking it. As always, topping off the white cassette, limited to 50 pieces, is a standard three panel J-Card. Knowing what BWM did with the Whenever, If Ever cassette, though, makes a person wonder what other deluxe editions they’re capable of. Only time will tell, I suppose, as this is quite standard.