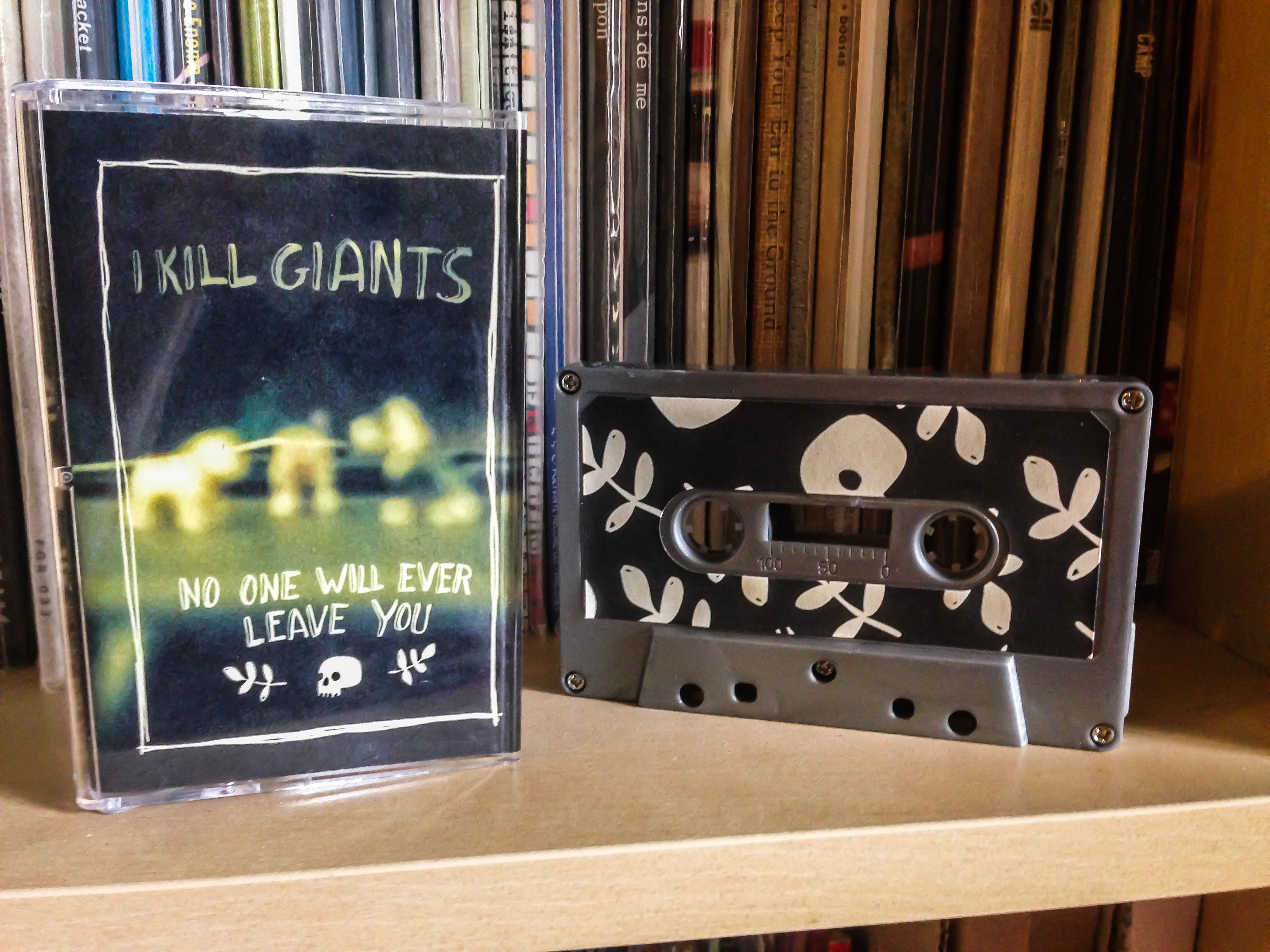 Cassette Corner is a column devised and constructed by Modern Vinyl contributor Matt Bergeron. Centering on his love for another vintage format, cassette tapes, Matt will be looking at the various and notable tape releases available (or previously available) to readers. This month, he’s looking at releases from I Kill Giants, Alpha Owl and Fun Home.

Released In January, this four track EP was unleashed on the world by the now defunct (or maybe not) I Kill Giants. On the heels of their full length, I Kill Giants has followed up nicely with their own brand of indie-pop laden hardcore. Lyrically, the EP seems to be peppered with undertones of growing up and being sick of the ones who haven’t. No One Will Ever Leave You is about as pop as an indie-hardcore release can get without reaching that line of annoying that is far too often crossed. The intricate musicianship mixed in with the clearly “sick of it all” message that the lyrics provide, the EP is a short but intense romp through the sad realization of adulthood.  With sub-par bands releasing a new batch of music in what seems like every 30 seconds, I Kill Giants is a beacon of light in this ever growing dark cavern of crap. Finishing up at a disappointingly short 8 minutes and 56 seconds, the release will leave any fan of this band wanting more, but it seems as though this might be their swan song. However, with all the conflicting reports, who knows if this is the end? The Internet is silly like that.

The packaging is consistent with Broken World Media standards; a colored shell, this time grey, and a standard 3 panel J card.  While not bad by any means, it would be nice for BWM to start mixing it up a bit, more like we saw with their cassette release of Whenever If Ever by TWIABP.

To say I’m a fan of any Tor Johnson Records release would be a lie; not much I’ve sampled of theirs really sat well with me. However, with the release of Alpha Owl’s 3 Song EP, my tone has changed. Right off the bat something was different. The opening track, “Boscage,” is a very welcoming mixture of metal, punk and dare I say it, indie. Personally, I’m all about the vocals and words in a song, and after head banging for a good minute and 24 seconds, I was yet again pleasantly surprised with the soaring vocals pumping through my tape deck.

If “Boscage” was my introduction to Alpha Owl, “Brute” is the track that has solidified me as a fan. It doesn’t take long for this foursome to rip into an ear bleeding guitar solo, that mixed with the sludgy-goodness of the rest of the EP, is a mixture that is often under-appreciated.  In short, Alpha Owl is for the folks who are too scared to listen to metal and don’t know where to start.

The packaging is very impressive. The three-panel J Card is hand letter-pressed with a few splashes of color that match the red cassette perfectly. Inserted in the clear case is a printed slip of paper with liner notes and it’s numbered out of 100.

With this being such a short run I would implore you to go grab one of the 11 tapes that are left before you miss out.

If Tigers Jaw and Now Now had a love child, the result would be Fun Home’s newest effort, Knit Into Place. Released by Broken World Media earlier this year, the astonishingly somber EP has gone relatively unnoticed. With a beautiful blend of soft yet forthright vocals and the musical stylings of your favorite indie releases, Knit Into Place is the perfect soundtrack to those lonely summer nights.

“Stay Inside” opens this five-track EP with a lone acoustic guitar that quickly builds into drum work that is sure to grab the listener’s attention. “Bad Weather” stands as one of the strongest tracks, having the most upbeat tempo and giving us a nice intermission to the mostly somber sounds of this release. Lyrically, the EP spans a broad range of emotions, however the strongest message comes from the closing track, titled “Im Not There.” Straying away from the standard emo mantra, the song details the desire to be a strong human being and maintaining a sense of independence. They sing in a particularly potent passage, “I’m not the type of person to think that I am worthless/I don’t need your assistance to feel my existence.”  Musically this EP is spot on — I would go as far to say nearly flawless — but sadly, the vocals attached to those lines kind of fade into the background as my listening progressed. It would be refreshing to hear the magnificent vocalist strain those chords a bit and put her vocal range to the test.

Although there is no doubt in my mind of the possibility that this release could get lost in the shuffle of all the new era of indie bands popping up, Fun Home seems to be trying vigorously to carve themselves into this scene. Only time will tell if they will be around long enough to make an impact.

Yet again, the packaging is the standard we are all used to from BWM. This release is a must have for your summer playlist.