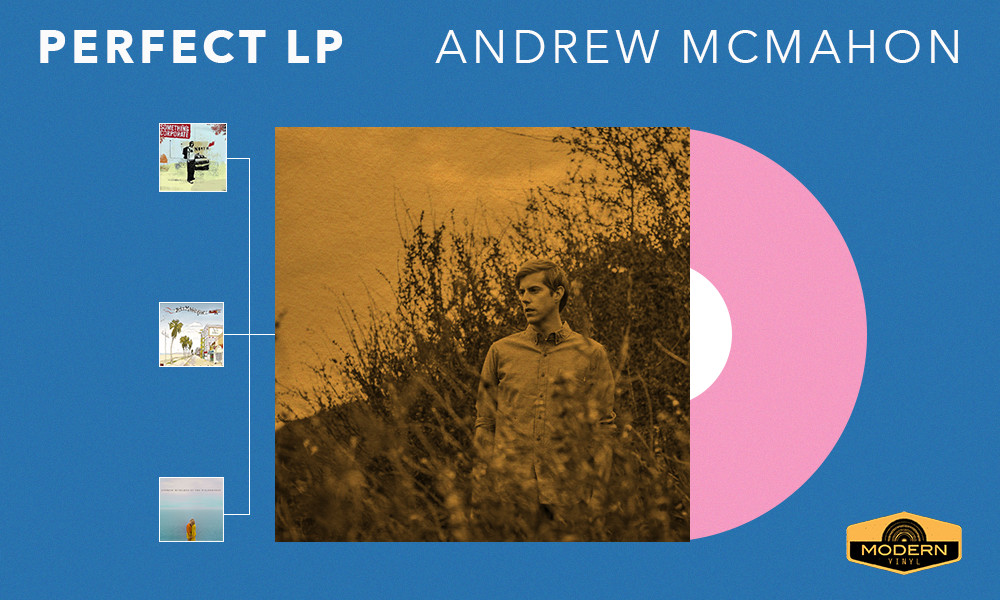 Andrew McMahon, frontman of both Something Corporate and Jack’s Mannequin, and the current centerpiece of Andrew McMahon In The Wilderness. The outlet’s debut and self titled album will be released on October 14th. You can pre-order it over at Amazon

The omission bound to cause the biggest uproar will be “Konstantine” even if objectively, it’s not within his upper echelon. Nostalgia drives the love on this selection and live favorite (and now live absentee), but considering I primarily fell for McMahon during his Mannequin days, I lack that connection to the track. I just couldn’t dedicate nearly 10 minutes and 1/5 of our allotment to it. And the battle over long, epic closers didn’t even involve “Konstantine,” but “MFEO” and “Caves.”

I’d assume other Something Corporate omissions are bound to upset, as well,  such as “I Woke Up In A Car,” whose lyrical work halts any long term love, and “Punk Rock Princess,” which again, is the same story. “The Mixed Taped” and “Holiday From Real” will likely be the lone Jack’s Mannequin absentees more than a few will notice.

Our opener is one of the more refined pop songs from his Something Corporate days, echoing guitars a welcome note as the first sounds reach your ear. The idea of calling out to the heavens (and whosoever up there) seems appropriate as well, given his penchant and skill for using big, sweeping metaphor in the sly masking of legitimate emotion.

Our first Everything In Transit selection is one of his best. The instrumental break between verse and pre-chorus is mesmerizing, the lyrical work just as impressive. You can feel the sting of dissolution deep in your bones as he sings “I swear I didn’t mean for it to feel like this/Like every inch of me is bruised,” a truly dynamic way of describing how we’ve all felt at one point or another. I didn’t go for the acoustic version, but side note, it’s well worth your time as well.

Cecilia and The Satellite

Our newest track is his newest single off Andrew McMahon In The Wilderness’ self-titled album and may be the catchiest play for radio he’s written to date. Included primarily because of the sweet poetry in this love letter to his newly born daughter (“Of all the things my hands have held/The best by far is you”) we also needed something to slot into the three spot as a would be single. It also helps when the track summarizes his entire career, something we’re attempting to do in this piece.

And his second catchiest play for radio. “Dark Blue” is yet another from Everything In Transit, and features perhaps his best work on the keys, which as fans should know, is quite the compliment. As he sings “Have you ever been alone in a crowded room,” you can feel once again, that loneliness which seemed to cloud these writing sessions, but when looking toward the “dark” and fairly empty sky, he seems to draw a warmth from it. A warmth eventually leading that specific album into sunny skies. McMahon himself has stated that the track detailed an eight month break he and his then fiancée were apart, along with everything they went through and eventual reconciliation.

People and Things is generally an underrated full length experience but “Television” in particular deserves more praise than it’s received. A nice 5th track rest, McMahon falls asleep to the buzz of the untouched television, most likely interrupting the slumber throughout the night. He seems to be singing the same of relationship interruption, along with the inability to maintain comfort, as the lines read, “What if you could move the needle to a more convincing song/And what if this, was never really broken all along.”

The only track off The Pop Underground, the singer’s first solo EP, is a pick-me-up following “Television” and also signals the new direction he took at this point in his career. A greater emphasis on synth work drives the hook, often times overshadowing the actual words, while the bass booms and McMahon displays refreshing versatility.

Lyrically, this one had to make the cut. The track most outwardly addressing the singer’s fight with a life threatening illness and his resulting feelings on mortality, it’s an autobiographical tale that was right at home on Jack’s final album (although it mentions The Glass Passenger by name and was originally written for it). At the 7th track, it seemed like the proper lyrical centerpiece when pondering McMahon’s career.

Our first off Jack’s Mannequin’s The Glass Passenger is another up-tempo selection (don’t worry, we’ll slow it down soon enough) and nicely encompasses the instrumental chaos present in that record (seriously, Annie and Bloodshot are back to back).  “I’ll find my words when no one’s talking” is clever and he slyly leads into the hook with the memorable and repeated line, “Be patient I am getting to the point.” Another refined pop track that just about every singer-songwriter wishes they could tackle.

My second Something Corporate choice is much like the first; a mid-tempo selection, giving way to stadium-ready hook. The track “given to a girl, written by a boy” features some of McMahon’s top vocal work under the Something Corporate moniker and is a nice lead in (tempo wise) to our final three tracks.

One of the more underrated Jack’s tracks out there and one’s that’s mostly forgotten throughout the great Everything In Transit. This is still very much heartbroken McMahon in that album’s particular story, with him claiming, “I walked by your apartment twice today/While you were gone at work” before finishing up the verse section with “But come quick, I am losing feeling.” And as he sings of another potential suitor in the chorus — “And get to church cause you’re a good girl/And he never told you that” — you have the singer-songwriter using yet another popular concept in a clever and personal way.

Hammers and Strings (A Lullaby)

In our two track conclusion, we begin to slow down, with perhaps the most beautiful of the Jack’s selections. The delicate taps of the keys accompany another highly personal tale and one that’s highlighted by a trip into the past with the lines, “But I still hear your ghost in these old punk rock clubs.” The descriptions of sleep and really darkness are especially poignant, as he asks, “‘Cause lately I’m not dreaming/So what’s the point in sleeping?” If you’re not dreaming and looking ahead, what’s the point of pushing on? Again, one of the best of his career and another nice autobiographical tale, something I seemed to aim for in these selections.

And for my money, the best he’s ever released. With the rollicking good time of part 1 “Made For Each Other,” we find a man coming out into the sun following the at times, downtrodden and emotional lyrics of Everything In Transit. And with “You Can Breathe Now” that position is solidified with an emotional, exhaling and dive back into whatever exactly is “love” and passion. It just so happens that the song is expertly paced, while spending just enough time within each vibe. As he exclaims “And you walked for miles down/The shores of California to the/Coast of Mexico where you could hide/And no one’d have to know,” it still gives me chills, all these years later. The song echos out with spoken word, a great end to whatever you think this makeshift LP has become.

Once again, Andrew McMahon In The Wilderness’ self-titled album will be released on October 14th. You can pre-order it over at Amazon

. Leave your own tracklisting in the comments, either through a streaming service or the old fashioned way…typing it out. I’ll also take mix CDs mailed to my home.