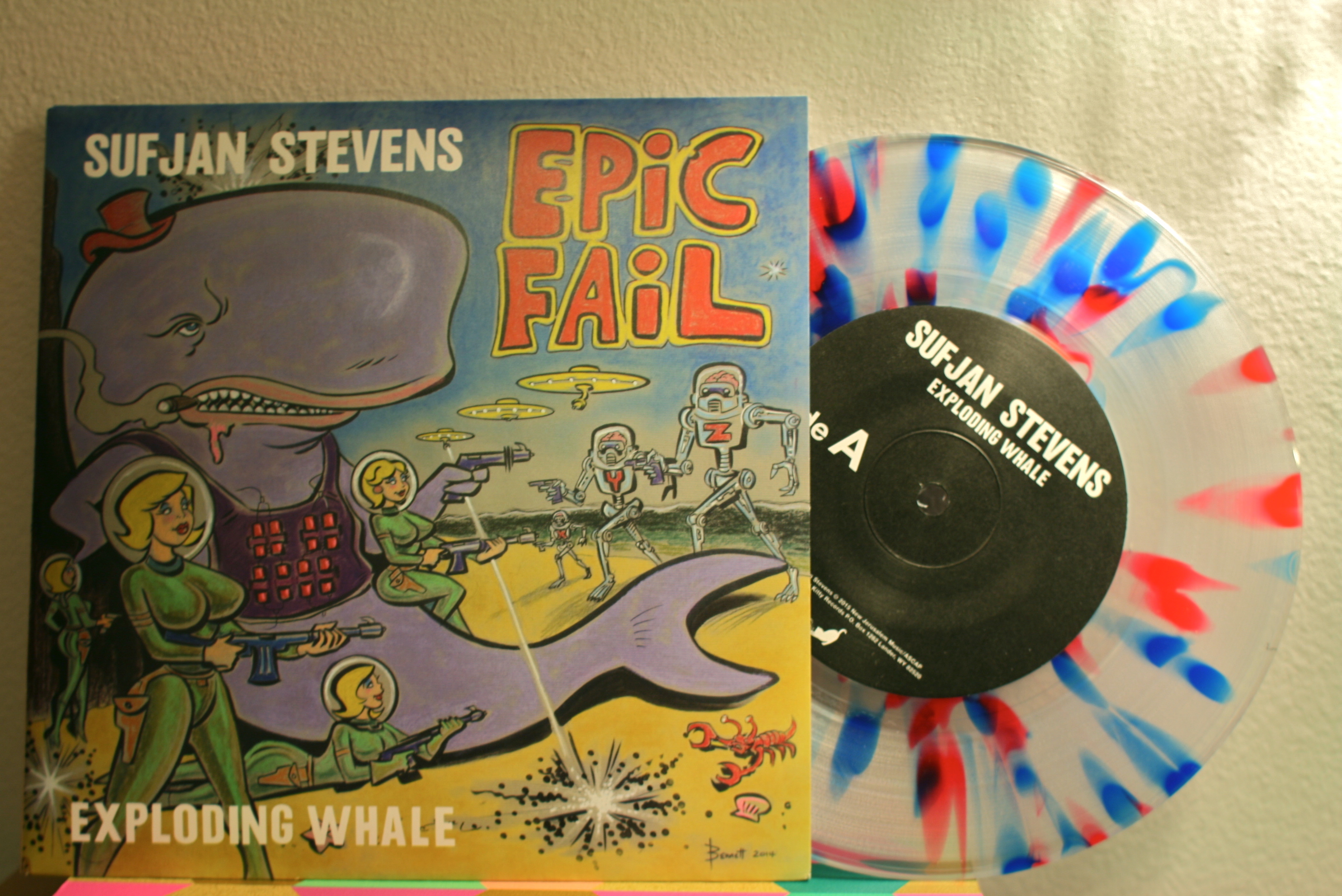 Pressing: First
Purchased: May 6, 2015 during the Carrie and Lowell tour via Sufjan Stevens’ merch table.

Last year, Sufjan Stevens toured in support of his latest release, Carrie and Lowell. The tour was phenomenal; one of the most beautiful shows I’ve ever seen in my life. If you ever get the chance to see him live, go. The concert gave off some church-y vibes in the beautiful Altria Theatre and it was the closest I’ve come to having a deeply religious moment in years.

During his tour, Asthmatic Kitty Records released a tour-exclusive 7″ featuring two songs: the previously unreleased “Exploding Whale,” and a remix of Carrie and Lowell‘s “Fourth Of July.” When Stevens was on tour, the 7″ was limited to 1,000 copies total, featuring two variants: “Sky on the Fourth of July” (500) and “Whale Grey with Red Splatter” (500). Making this an even more special grab, only 25 copies of each variant were available at the shows, limiting them to 50 per date. My trip to the merch table to pick up a copy of Carrie and Lowell was well worth it, since I got there early enough to snag a copy of the Fourth of July variant.

I later learned that this little 7″ was so popular, that for his European tour, he pressed it again on black vinyl. Unlike the first pressing, this specific pressing (which was also sold via the Asthmatic Kitty webstore) featured a download card for both of the songs. I’m a little bummed that my copy never came with a download card, but I’m okay with that. It’s a fun little addition to my collection.

I’m in love with the color of this particular EP. It’s clear with red and blue splatter; it’s very patriotic. To me, the other variant was a little too gruesome for my tastes, only because it looked like a whale had been attacked…or I guess an actual exploding whale. That’s a lovely image, right?

There are only two songs on here. “Exploding Whale” is a song that sounds so dreamy; as if you’re in a submarine, looking out at the scenery the depths of the ocean provides you. It’s melodic, and doesn’t quite sound like an Age Of Adz castoff, despite its electronic nature. Lyrically, the song has profound meaning interwoven, presenting listeners with some material for deep thinking, especially on the spiritual side.

Continuing on with the dreamy, ethereal soundscapes, Side B contains the PPD Remix of “Fourth of July.” The remix is quite interesting, since it gives an already extremely sad song more of a melancholic edge to it. I have no idea what “PPD” stands for, or who actually remixed it. It’s not a bad remix at all.

I listened to this 7″ a few days after the concert and it’s been in fairly regular rotation on my record player. The two songs are quite calming and lovely, albeit quite sad. I wish I had the actual mp3 files for these two songs, but there’s something nice about not having these songs in my digital library. I can’t play them immediately on-demand whenever I want, and that’s okay. Sometimes disconnecting from technology gives you a nice break, especially when you’re not playing something on your iPhone, laptop or iPod.

About The Pressing: The 7″ comes in a regular cardboard sleeve, with a plastic sleeve over top. It’s nothing fancy by any means, but the artwork on the sleeve is the real winner. The kitschy cartoons are reminiscent of 1950s space adventures. It’s fun. It’s quirky. It doesn’t make you realize the music it holds is sad.