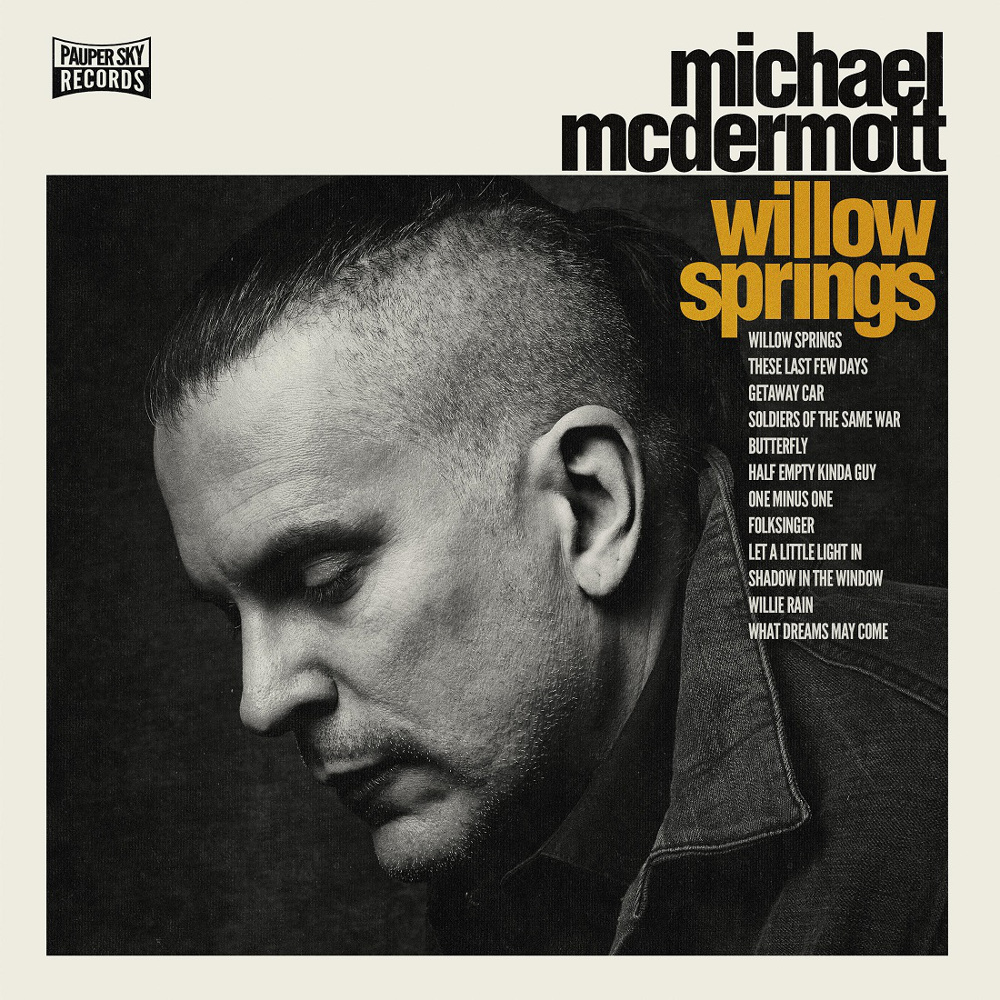 Personal loss and tragedy has always inspired great art. Case in point, creation stemming from the loss of a loved one, that of which can certainly be painful to listen to, has always fascinated me. For whatever reason, most of my favorite songs of the decade (so far) were born from tragedy. Butch Walker’s “Father’s Day”; Jason Isbell’s “Elephant”; Chris Stapleton’s “Traveller”; Frank Turner’s “Song for Josh”; Augustana’s “Remember Me”; Field Report’s “Pale Rider”; Fireworks’ “Run, Brother, Run”; Sun Kil Moon’s “I Can’t Live Without My Mother’s Love”; Canaan Smith’s “Bronco”; Mandolin Orange’s “Blue Ruin”; John Fullbright’s “High Road.” A few are story songs, but most were inspired directly by the death of someone close to the artist. And all are incredibly poignant, emotional and visceral.

“Shadow in the Window,” the key track from Michael McDermott’s new album Willow Springs, added its name to that special list the very first time I heard it. By all accounts, it’s a flawless track. Starting with the figure of a delicate, acoustic guitar, while eventually incorporating a mournful harmonica — which sounds like what Springsteen plays when he does “Thunder Road” acoustic — “Shadow in the Window” encapsulates an entire father-son relationship in the space of seven minutes. McDermott’s last album — 2012’s sterling Hit Me Back — was largely inspired by the loss of his mother. Heartbreakingly, he follows that album with Willow Springs, an album equally inspired by the passing of his father. Several tracks on the new album carry the weight of that loss, but none so directly or autobiographically as “Shadow in the Window.”

The evocative cut has McDermott referencing that title, in that his father loved to sit or stand at the front window of his house, looking out at the world. When McDermott would go to visit, he’d be greeted with his father’s face in the window before even knocking. When he would drive away, it would be with his father’s shape framed in that same passage, glowing in his rearview mirror. When McDermott goes back to his dad’s place after the funeral, it’s the absence of that usual shadow pushing him into the acceptance stage: his dad is really gone.

Each verse of “Shadow in the Window” is just four lines, but they’re all equally devastating for how they convey the imperfect, yet loving relationship McDermott shared with his father. In one verse, McDermott talks about how he and his dad never had much to say to one another; in another, he thinks about how his dad might have just been too proud to ask his son to stay for another hour; and in the song’s most aching moment, McDermott reveals the most important thing his dad ever said to him: “Son, I want you to be so much better than me.”

Relationships are complicated. Relationships with parents are especially complicated. As Bono sang of his own father’s passing — in U2’s splendid “Sometimes You Can’t Make it on Your Own, from 2004’s How to Dismantle an Atomic Bomb — “We fight all the time/You and I, that’s all right/We’re the same soul.” And as Springsteen sang in “Independence Day,” one of the many songs about his fraught relationship with his father — “There was just no way this house could hold the two of us/I guess that we were just too much of the same kind” — sometimes, it’s the parents and children who are the most alike that don’t get along.

Still, disagreements, arguments or even just situations where you have nothing to say to each other doesn’t mean that a relationship isn’t valuable, and McDermott’s song relates that idea perfectly. It’s why, on Father’s Day, McDermott dedicated “Shadow in the Window” to “the guy who sometimes seemed a stranger and other times, a savior.” It’s why this song ends with a refrain of the three simple words that matter most: “I love you.”

I’m honored to say that I’ve shared the stage with Michael McDermott. Three summers ago, when I was living in his home state of Illinois, he did a concert of Springsteen covers in my town. I had no idea he was playing nearby until an hour or so before he took the stage, just because I happened to be downtown and heard the sounds of a concert up the hill. When I looked up the event on my phone and saw it was Michael McDermott (an artist I’d written about previously) playing songs by my favorite artist, I was sold.

At the tail end of the set, during a spirited rendition of “I’m Goin’ Down” (from Springsteen’s 1984 populist classic Born in the U.S.A.), Michael turned to the crowd saying he and his band had forgotten the last verse. Long story short, I ended up onstage next to McDermott, sharing a mic with him for the conclusion of the song. It’s a moment I remember quite fondly, and one I’m even more proud of in light of “Shadow in the Window” and Willow Springs as a whole.

This is a song I’ve been thinking about a lot lately — not only in light of Father’s Day, but also in relation to the passing of my grandfather, who would have been 90 in April. McDermott just experienced the first Father’s Day without his dad; I just went through the second without my grandpa. For me, the wound of my grandpa’s death still feels fresh, and I think in some way, it always will. I’d expect the same to be true for McDermott with his late mother and father. This song, though, is a reminder that love is bigger than death, and that sometimes, it only burns stronger after a life has been extinguished.

For Father’s Day, Michael McDermott made “Shadow in the Window” available as a free download on his website. I strongly urge anyone who is a fan of honest, heartfelt music to check it out. If you enjoy it, try giving Willow Springs a spin. McDermott’s talent is too big to go ignored, and with this song and album, he might just be at the top of his game.