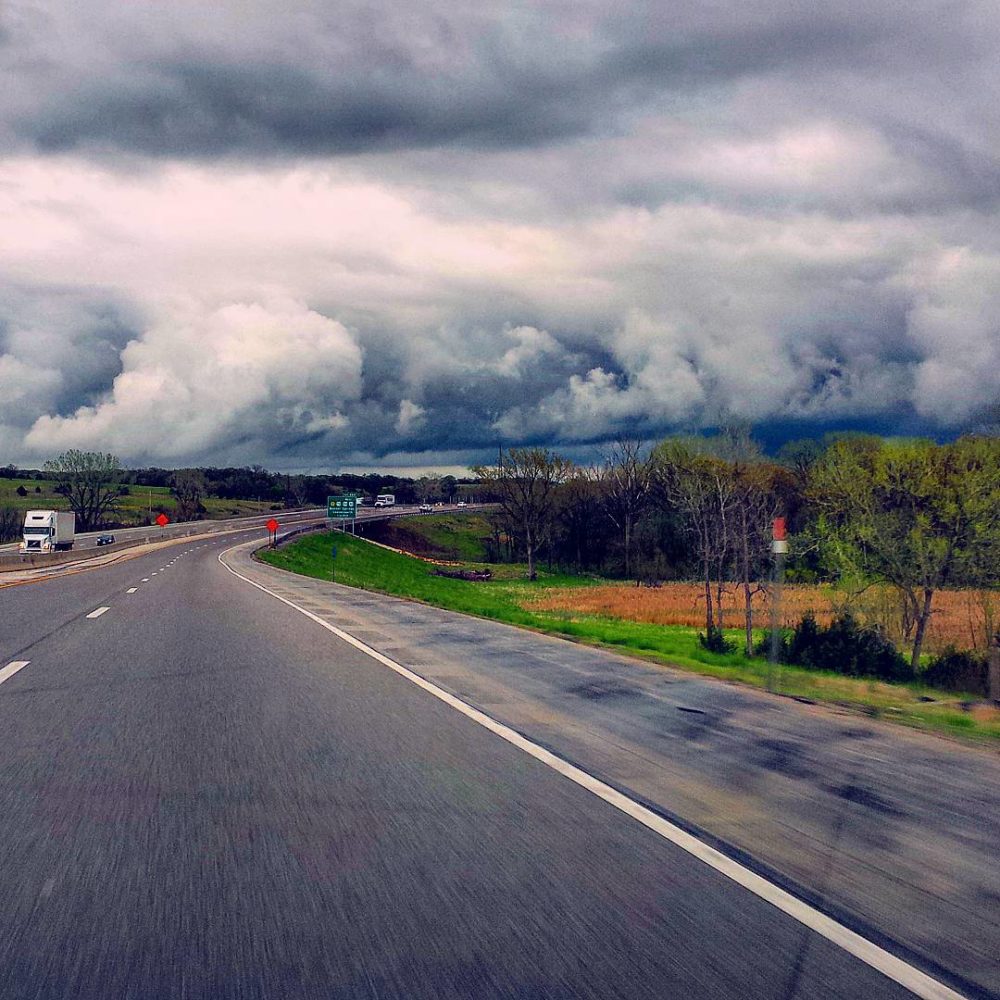 The best car songs have that propulsive beat, mimicking the sound of tires eating up mile after mile of blacktop. Building off Meghin’s fifty states playlist from a couple months back, why not take a trip down the highway and visit as many as we can? Songs were chosen based on their propulsive nature, beats, and whether or not they’re actually about driving/roads/etc. Explanations of a few follow, and the rest, and their reasons for inclusion, ought to be readily apparent.

Pup — DVP
The Dream Is Over

Sometimes, the reason to leave town is because everything’s gone to shit, and you find yourself “driving fast to get away,” as Pup sings in this frantic number from their latest album. Get out of town, go somewhere else, and see what the road brings.

Superchunk — Precision Auto
On the Mouth

If ever there was a song to make you speed, this is the one. It’ll get you out of town in a hot minute, as you scream at all the others keeping you from your destination. There’s no grander middle finger for the irritating habits of other drivers than this speedy blast of catchy punk.

Picking someone up takes a new definition when you’re on the road. Maybe that stranger you offer a lift is the person with whom you’ll spend your life? Maybe they’re a slasher killer? You’ll never know until you pull over and open that door. Do as A Giant Dog’s catchy garage punk suggests, and don’t pretend you’re in love …

Pulsing, throbbing, the road going by as you see exactly how far down you can press the accelerator before the g-force presses you into the seat. This bit of dancy electronic music also reflects that weird instance where you’re going so fast, things seem to slow down. That’s the moment 10 seconds before you glumly slow down, right after freaking out when you glance at the speedometer.

DJ Shadow — Mashin’ On the Motorway
The Private Press

Sometimes, you get caught in traffic, things get real, and you’re pounding your fist on the steering wheel, wondering about “these idiots.” The build, build, build, and storytelling flow of this cut make it a really underrated piece in the DJ Shadow catalog.

Getting your mind juiced by some plums as you drive down the freeway, just sort of chugging along. It’s a simple, cyclical bit of lyricism and rhythm, and it’s absolutely hypnotic. There’s some weirdness going on here, sort of like driving in the summer heat with no air conditioning when you get a little heat stricken at stops.

Speaking of drugged-out weirdness, Kraftwerk’s “Autobahn” might be the closest thing one has to a real-time soundtrack to their commute. This track, obviously, is the highlight, perfectly encapsulating the motorik beat of krautrock. Really, any Kraftwerk song would be perfect for riding along, but this gets the highway in a way very few pieces of music do.

Johnny Rivers — Walk Myself On Home
Here We ‘A Go-Go Again!

The car dies, you get in a fight, and to hell with whomever’s supposed to get you back. You can do this on your own, because you’re a solid, stand-up kind of person who doesn’t know when to say, “sorry.” After a couple of blocks this is probably going to seem like a bad idea.

Honorable mention I didn’t include because it’s not on Spotify: Dr. Dre ft. Snoop Dogg, Ruben & Jewell’s “Let Me Ride.”