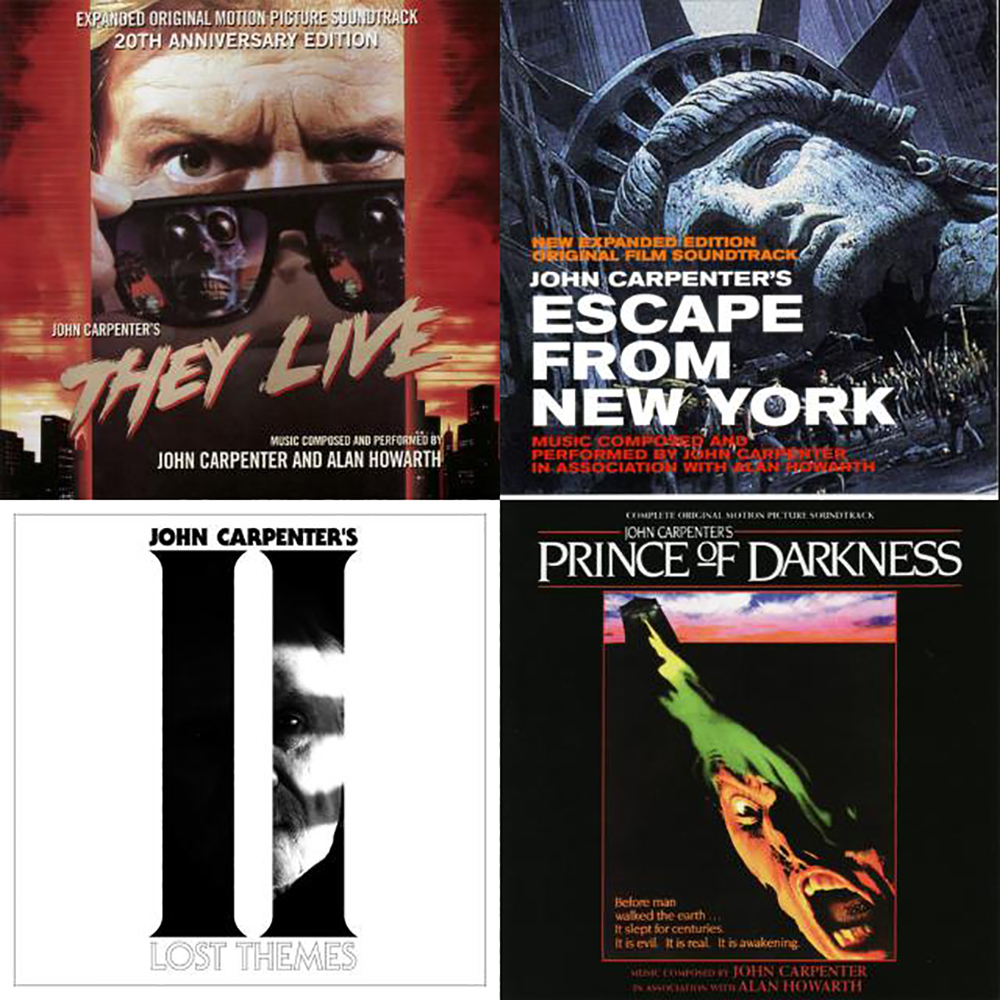 John Carpenter, horror and sci-fi director, is known for iconic films such as Halloween, Escape From New York, and The Thing, but deserves as much credit as a composer and performer, primarily accompanying his visual work. After a lengthy hiatus in both films and music, he returned in 2015 with the release of full length Lost Themes on Sacred Bones. It was a collection of original music, ostensibly composed music for various things, but never used. It was followed up with the release of Lost Themes II earlier this year, as well as a sold-out international concert tour.

In order to keep this a reasonable length, and not place myself in some sort of mental panic, I had to lay down additional ground rules to make the project manageable. Given the sheer number of “complete” scores and extended compact disc reissues of Carpenter’s work — and, to be honest, my unfamiliarity with a lot of his later era work on the likes of The Ghosts of Mars or Escape from L.A. — I limited myself to music which had only ever been released on vinyl. Additionally, I kept this to the length of one LP, as previously established. Finally, in what’s most likely to get me grief, I made this an album. These might not be the most famous cuts, but this is definitely a 45-minute LP I would play until the grooves ran smooth.

There are selections on the list below which are not on the playlist above, because Spotify evidently doesn’t have the depth my iTunes does.

Not music, but I think this sets the tone for what’s to come better than anything else. Audio snippet intros are the absolute best. See also: Death Waltz’s The Fog reissue, which drops the opening prologue before the main title theme.

The opening cut on Carpenter’s second release of original material, and arguably the best track on there. It’s pulse-pounding, and contains all the elements I’m aiming for on this LP, in that it works almost as a dance track, but could easily score the opening titles of some far-out science fiction movie.

Abduction at Airport (from Big Trouble in Little China, 1986)

This LP, by now, should have you either full-on rocking out in your living room, or possibly pushing the accelerator in your vehicle down a little more than you should. “Abduction at Airport” was the first cut I thought of when I started putting this comp together, and arguably, everything is arranged in such a way as to emphasize the chase elements of the film’s first big action sequence. Think of this LP as one big action sequence.

The Duke Arrives / Barricade (from Escape From New York, 1981)

One more note on the bassline, and you’d have “My Sharona,” to say nothing of the cowbell that’s equal parts “Mississippi Queen” and “Lowrider.” It’s a pastiche of any number of funky tunes, but damned if it doesn’t work. You can absolutely get down to this, and I’m surprised it’s never been lifted as a sample. The tinny synth breakdown in the middle makes the return to the main beat even more fulfilling.

The closing cut to They Live‘s soundtrack, which plays over the film’s closing credits, this is a perfect example of late ’80s Carpenter. The guitar’s pretty prominent, and the synths get a little less analog, or more into this tinny digital mode. Again, though, this is funky, rocking, and does a great job of bridging action and sci-fi, making it the perfect lead-in to the later, more horror-oriented cuts on this LP.

The sheer simplicity of this track kills me. A standard piano sting, looping synth high end, and a drone across the background all steadily build in volume and intensity, and that’s what makes this the marker of a tonal shift. As soon as that Halloween stinger starts cutting through in the final half, you know some things are about to go down, and we’re only happy to drop straight from there into some legit horror disco.

Somebody needs to remix this. This cut has all the necessary parts to make for a dancefloor hit, circa 1975. The trap’s a little flat, but with some EQ, I imagine someone could figure out a way to make that sucker snap.

Given all the possible variants of this cut, it was hard to decide which one to go with, but ultimately, the Halloween II take on this iconic piece had to be the way to go. It’s so much bigger and more gothic than that which preceded it, yet still managing to retain the simplicity which made it so appealing in the first place.

The original Lost Themes has a lot more going for it than its follow-up, and I think that’s due to these all being solo Carpenter compositions, which his son Cody would then work on with him. Lost Themes II is more of a collaborative affair, and while that might make for some bigger possibilities (which we’ll examine a few tracks from now), it loses the appeal that tracks like “Night” have. Namely, this sounds like it’s the theme to something. This could easily be one of Carpenter’s sci-fi/horror films, and I’m guessing that heavily-processed guitar would hint at some righteous action, as well.

Chariots of Pumpkins (from Halloween III, 1982)

Part of me wanted to cheat and throw in Umberto’s cover of this from a few years back, because it’s just so amazing, but to go this far and start breaking rules just doesn’t seem right. Anyhow — for all the creepiness of the Halloween main theme, this is really the height of Carpenter’s ability to generate genuine anxiety. It might not be as dread-inducing, but the insistent nature of “Chariots,” along with the ever-increasing complexity and volume, make this so very disconcerting. The layer of pulsing that ever-so-subtly swipes from the BBC Radiophonic Workshop in the latter half really makes this a fun one.

Bare-bones in its simplicity, yet so quietly cool, it would later be covered by no less than Afrika Bambaataa, the theme to Assault on Precinct 13 is early Carpenter perfection. As we near the end of everything, what better way to reinforce everything we’ve thus experienced than with a track which mirrors the funky beats that wind their way into everything? Plus, there’s that cool hint of Morricone which leads nicely into our penultimate jam.

Call it heresy, but I’m saying this is the definitive version of the iconic theme to Kurt Russell’s finest movie (Night Birds cover notwithstanding). Carpenter and his collaborators — son Cody and god-son Daniel Davies — don’t mess with the bones of this nigh-perfect piece of music. They just punch it up, and make that sucker growl. It has so much more oomph and power, and really kicks you square in the chest.

And we close out our listening experience with the quietly-insistent closing theme to The Fog. It’s as eerie as the film which preceded it, but with maybe a sense of hope.

Have your own LP? Leave it in the comments.