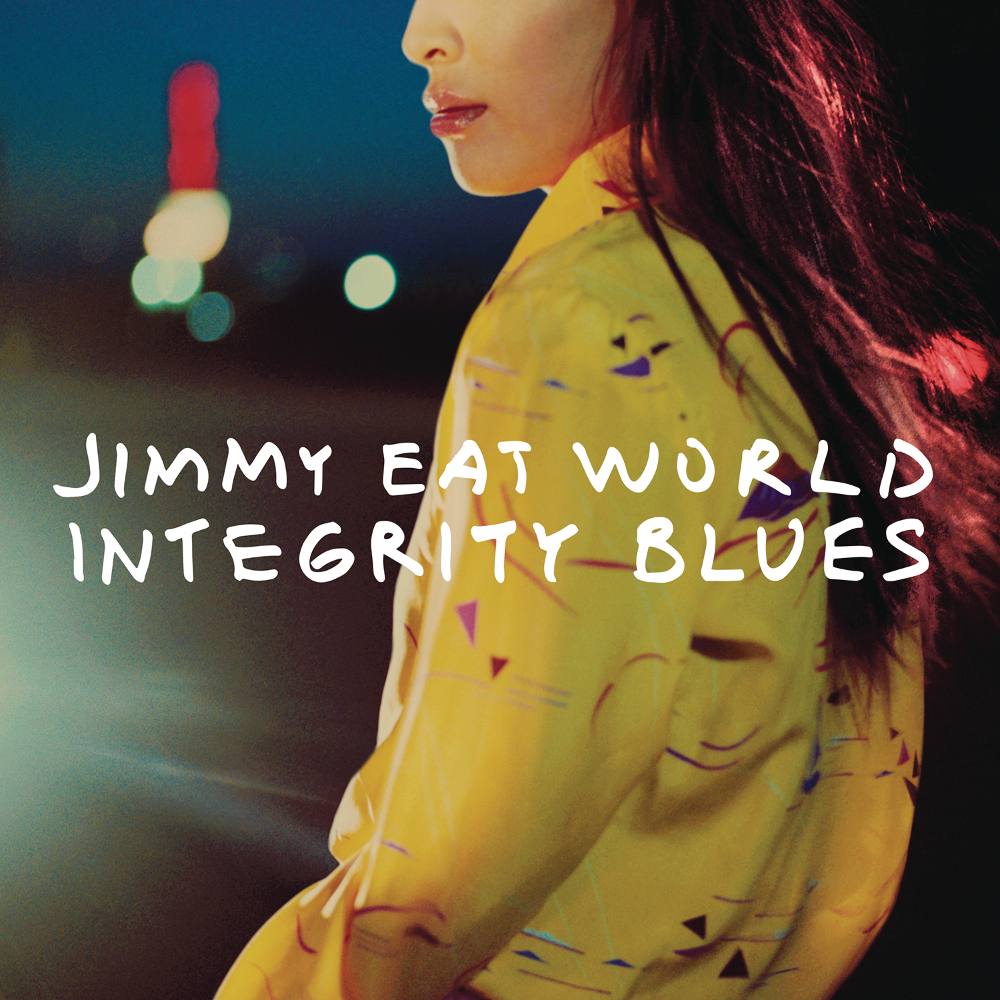 I will never be able to be objective about Jimmy Eat World, and that’s okay. The Arizona band’s 2004 masterpiece, Futures, was instrumental in getting me as invested in music as I am now. Without it, my life would be in a different place, and I would be a different person. So every time I put pen to paper to write about a new Jimmy Eat World album, I feel like I have to spend at least a few sentences discussing my own personal baggage. As a 13-year-old in the fall of 2004, it’s possible that no event in my life, up to that point, had been quite as significant as hearing “Kill” for the first time and realizing just how much I could connect with a piece of music. Now I’m a 25-year-old adult and a lot of things have changed, but at least one thing is the same: every first listen to a new Jimmy Eat World album still feels like a capital E “Event.”

Luckily for me, a lot of people get almost as emotional about this band as I do. Jimmy Eat World, though known amongst many “outsiders” as one-hit wonders, have become one of the most beloved bands in their respective scene. They are also, surprisingly, one of the most durable rock bands remaining, having survived a tumultuous 23 years of shifting trends, changing radio formats, out-of-touch labels, and collapsing music industry ideals. They’ve never released a bad album, unless you count their 1994 self-titled debut, which almost no one does. In the eyes of most, however, they also haven’t quite lived up to the magic of their breakout three-album run: 1999’s Clarity, 2001’s Bleed American, or 2004’s Futures.

That last bit could change with Integrity Blues. The album, Jimmy Eat World’s ninth and their first since 2013’s Damage, might just be their best since 2004. It’s certainly the first album since Futures to revisit the moody late-night magic of the band’s heyday. Indeed, Integrity Blues captures the crisp and cold fall atmosphere of Futures to such an extent that, on one of my first listens, I was convinced I was in my mid-teens again. Listening to this album on a 1 a.m. highway drive, with the cold fall air pushing summer into memory and rain soaking the highway, took me back to when I first fell in love with Jimmy Eat World’s music. I can only hope it plays a similar role for other longtime supporters.

In a letter to fans announcing the album, frontman Jim Adkins penned a dreamlike, stream-of-consciousness explanation about what the phrase “integrity blues” means and what the album bearing that name is about. “Emotional injury is usually our own making,” he wrote, “Our ego fighting to selectively ignore reality that may not reflect our expectations. When we allow a moment of honesty and look at the gap between our expectations and reality, all too often we find a place to identify as a victim. We take the disappointment gap personally.” Integrity comes into the equation when you’re able to look at the discrepancies between your expectations and reality and not cast yourself as the victim. That way, you don’t get stuck in a feedback loop of negativity, where everyone else is the villain and where you never grow. “Integrity blues,” then, is being able to, as Adkins says, “live as a person in-progress.” It’s looking at the differences between expectations and reality, accepting them, casting off the urge to play the victim, and learning how to define yourself and take your next steps based on the lessons you’ve learned.

“Emotional injury of your own making” could be the title of an emo album. Certainly, the right to feel sorry for yourself has been the source of many, many songs over the years—some of them probably written by a band called Jimmy Eat World! But while Integrity Blues, like its predecessor Damage, could probably be described as an “adult breakup album,” it’s ultimately more about self-discovery and growth than it is about heartbreak.

Not that there isn’t heartbreak here. Relationships fall apart, song after song, on this album. Opener “You with Me,” for instance, sees a love crash and burn amidst ominous synth thuds and a rousing guitar solo. The unique thing about these breakup songs, though, is that instead of self-pity and apportioning of blame, the protagonist is consistently willing to shoulder the blame, all on his own. “What makes our love so hard to be?/Is it you? Or is that you with me?” Adkins asks on the first track. Later, on “It Matters,” he blames his own silence and lack of action for a relationship that just isn’t working anymore. The verse where this happens (“I imagine talks that last all night/I never bring it up, but every day I want to/I think about us dancing, but it’s something we don’t do/Well that’s my dream, doesn’t it sound good to you?) is right up there with Jim’s finest writing. So is the knife-twist moment in “The End Is Beautiful,” where self-reflection helps the narrator identify why his relationship fell apart. “You see the problem was us, we tried to bend love to the picture we had in our heads/Oh that’s not nothing, but there it is/And it won’t kill us breathing it in” he sings gingerly. His words alone, as usual, are enough to break your heart.

All this emotional wreckage comes to a head on the final two tracks, which although divided in the tracklist, fit together as two parts of a larger whole. On the title track, Jim sings nearly a cappella, his voice suspended over a tranquil bed of horns and strings, awash in reverb. The key lyric (“No one’s chasing you/No one’s making you/Spend lonely nights/Poisoned through and through”) captures the meaning of the record poignantly and succinctly, conveying the words that Jim wrote in his early letter about Integrity Blues. There’s no sense in shipwrecking yourself in your own self-pity. Heartbreaks happen, but dwelling on them with bitterness and anger is not the way to move past. The protagonist of the record recognizes this fact in “Integrity Blues,” resolutely intoning “I’ve got work to do” in the moments following the climax of the track.

That “work” happens on “Pol Roger,” the latest in Jimmy Eat World’s long history of sterling closing tracks. Normally, the band reserve their biggest emotional wallops for the final slot. “Dizzy” certainly brought Chase This Light to close amidst a car crash of a relationship that felt far too real, while “You Were Good” (from Damage) was a capitulation, a surrendering to the fact that a great love was coming to a close. “Pol Roger” is slightly different, if only for how bracingly uplifting it sounds. The verses, to be fair, are full of bittersweet imagery, with the narrator describing his plans to head somewhere warm and “spend my birthday alone.” As Adkins wrote in his letter, “staying on the best path you can may feel like lonely work sometimes.” When “Pol Roger” hits its chorus, though, it’s all catharsis, a tidal wave of relief, release, and chiming guitars that feels as rejuvenating as any moment in music this year. “First they’ll think your lost, but you’re not/It’s the easy feeling,” he sings on the chorus, drawing attention to the truth of his self-imposed exile. As he sings later, he’s “alone, but not lonely.” The distinction is crucial, underlining the difference between a man bitter because he lost love and a man who feels blessed just to have experienced it in the first place.

In weaker hands, that message might seem corny or overwrought — especially as the ultimate “punchline” of a record. But one gets the sense from Jimmy Eat World that this philosophy is really a part of how these guys live their lives. In a recent interview, when asked if he even liked doing press tours, Adkins said “You have to enjoy it, because it ends. There’s gonna be a day when no one cares, and they’ll be over it.” In a funny way, that response does a wonderful job of bottling up the overall meaning and message of Integrity Blues. Cherish what you have. Be thankful for what you’ve gotten to experience. Be grateful for the people in your lives. Nothing lasts forever, and on a long enough timeline, almost everything ends in some form of heartbreak. As Adkins told fans ahead of the release of this record, though, “Happiness is one of those fleeting finish lines.” Our job is to recognize when it’s here, whether it comes in the form of a new love, a place that feels like home, or the best record in 12 years from one of the finest bands on the planet.