Thanksspinning: The Swellers — Ups and Downsizing 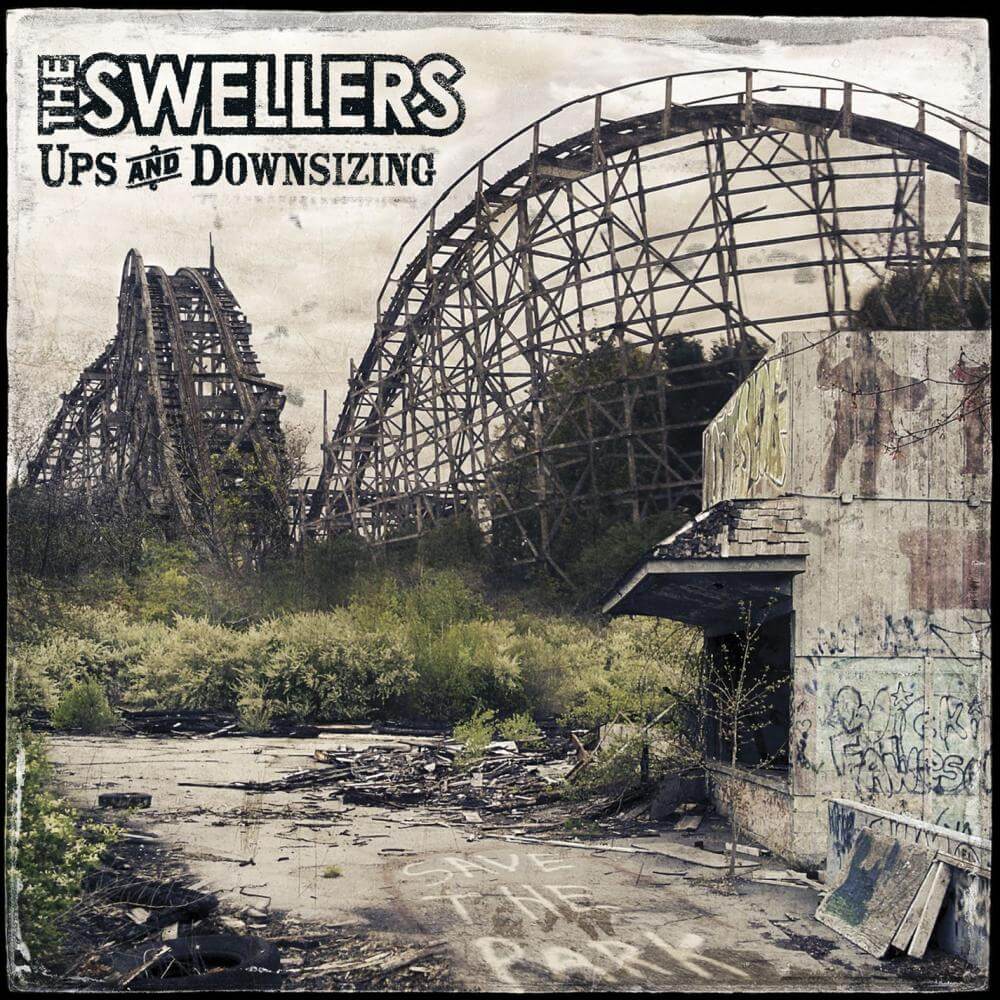 My name is James Cassar. I am Modern Vinyl’s Managing Editor of News.

The record I am thankful for is The Swellers’ “Ups and Downsizing.”

Michigan has some of the most polarizing and inconsistent weather in the country. During one day in fall 2009, I remember it began sunny and lukewarm, continued while rain threatened a monsoon, and ended dry, but at the lower end of the thermostat. Luckily, my companions and I were dressed in all black, not to combat the cold, but to avoid being seen behind large moving set pieces and a mixing board in a dark auditorium. This year’s musical at Notre Dame Preparatory was How to Succeed in Business Without Really Trying, and I watched a cast belt out corny, mid-century showtunes for an entire weekend, adjusting volume and activating microphones with my good friend, Ian. Ian had rented out a space 10 minutes away from this auditorium to host shows and sow the seeds for his record label, Polycarbonate Records. We made up the dynamic sound design duo for this weekend’s production, but he definitely had tangible experience.

In exchange for free (and necessary) lessons in how to set up a 16-channel soundboard and wire mic packs, I made Ian CDs for the ride over to Avondale High School. (NDP had a “cafetorium,” a cluttered mix between a cafeteria and an auditorium. A musical of this size and scope couldn’t fit in that cramped space.) I, genius mixologist, introduced Ian to The Swellers, a group of Flint, Michigan dudes also slowly learning how to succeed in business without really trying. Their major-label debut, Ups and Downsizing, was released a handful of weeks earlier, on the day before I turned 15. “Fire Away” opened the first CD-R I popped into Ian’s stereo: gigantic production gave the guitars lift and push, and the drums their apocalyptic sense of purpose. As the second track on Ups and Downsizing, its bloated nautical metaphors were perfect for soaked roads — remember, Ian and I are driving through rain — and perfect for Ian, who was more a sucker for meaty, glossy pop-punk than I became. (He once signed my yearbook with lyrics from The All-American Rejects’ “Move Along.”) When the song ended, with Jono Diener’s cymbal bleeds cut short, he exclaimed breathlessly, “Damn, these guys are gonna be huge!”

As time would tell, save for two gigantic-sounding records on Fueled by Ramen, The Swellers didn’t succeed in business, but they tried. In a heartbreaking eulogy for his own band, Jono wrote for Noisey that their biggest chance at a hit single came when its associated YouTube video was set to play after a Paramore video. As it happens, Ups and Downsizing and Paramore’s Brand New Eyes were released on the same day (a great day for 14-year old James), but The Swellers’ album sales weren’t properly reported to SoundScan — a death kiss, so to speak, that would jeopardize chances at landing tours and securing long-term business relationships. The album was critically acclaimed: its 89 percent score on AbsolutePunk would be the first percentage I ever read on that message board. Alternative Press loved the record, giving it four and a half stars.

Ups and Downsizing had all the glitz and polish a record 2009 Fueled by Ramen could turn into a phenomenon. The Swellers’ beginnings in basement punk rock are dialed back, but their energy remains. Opener “2009” gets shocked with double-time bass kicks, while “The Iron” offers up a downcast take on post-hardcore, with vocalist/guitarist Nick Diener’s exasperated yelps anchoring the action, west of radio territory. The rest could’ve found itself on active rock playlists across the country. The record’s title track sports a blossoming chorus and a bridge, with its promise that “it’s looking up!” presaging The Wonder Years’ sugar-rushed proselytizing and the musical movement which followed. (In another dour twist of fate, The Swellers would tour under The Wonder Years three years later, never truly able to capitalize on the world they helped ensure existed.)

My uncle, Jeremy, has a slightly altered version of this story. He and Nick, alongside my sister and a drummer named Josh, recorded an LP as Beilby’s Ball, a folk band. The end result, The Rovers and the Dandies, was released in 2006 to zero fanfare, save for one half-full hometown gig at all-ages venue Flint Local 432. I don’t even remember if the band was the headliner; I just remember how excited the Cassars were to see the family band, and how out of place we all were inside jet-black walls laced with graffiti. I was 12 years old, watching my family sing tortured melodies.

This is how my story with Ian ended, however. Polycarbonate Records closed, recordless, in summer 2010: the month after I moved to Virginia. We only existed as Facebook friends, and my repeat tenure as sound designer for my second high school was never the same. “Ups and Downsizing” nearly predicts my first weeks in the Old Dominion. Over a steady bass line and a unwavering pair of chunky guitars, Nick Diener exclaims, “and if we ever sell this house, we’ll pack our bags and move down south, somewhere warmer where no one will notice the car we drive for the first time.” No one seemed to care that we drove American to support our neighbors who worked for General Motors, Loudoun County — one of the richest counties in the nation —stood unaware of the state we had just left, and the state it was in. Michigan was in the midst of grappling with a bailout of its prized industry. Detroit’s mayor was embroiled in a series of scandals in 2007 that left its citizens bankrupt and cheated. Ups and Downsizing built its narrative around this grayscale tone: the act of “downsizing,” not shrinking the band’s ambition, but informing their humble worldview.

Is that what doomed The Swellers: their steadfast, realistic hometown pride? Or were they just victims of circumstance? I’m not entirely sure: their place in my personal history shines brighter than how our scene’s music magazines mention them in passing. I just know this. I’m six years removed from a Michigan address and one of my fondest memories in the Great Lakes State surrounds a record that was robbed of its glory. And maybe these little victories kept the band going, as they do for me, in a much more temperate climate.