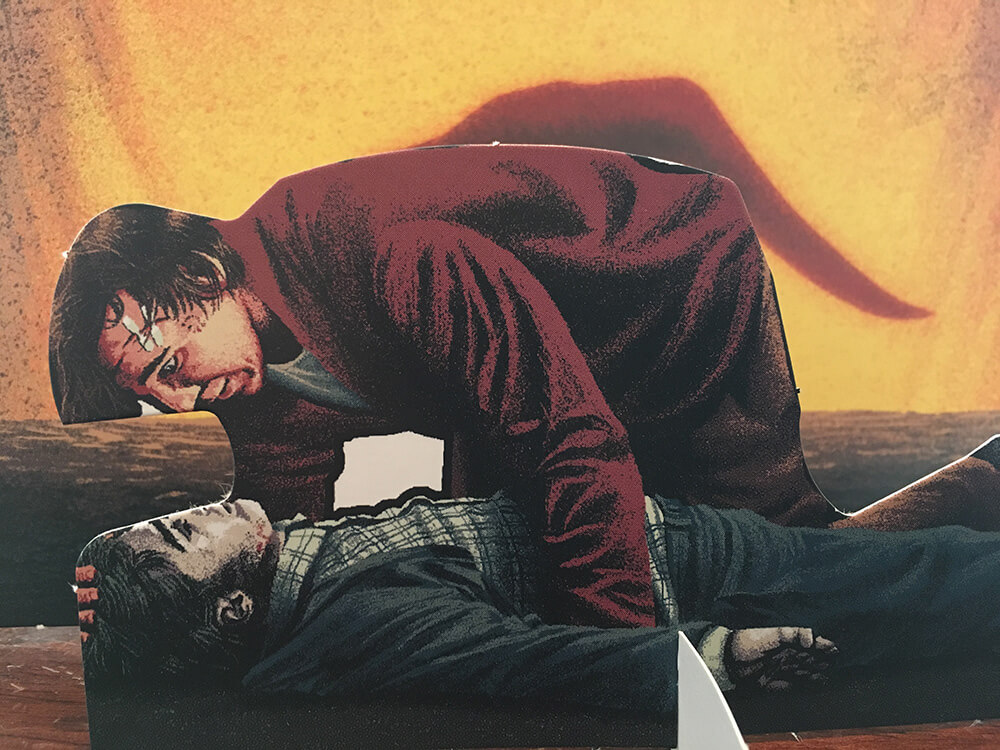 Certain soundtrack releases show an advanced understanding of their visual counterparts. They understand the moments that need capturing, and more importantly, they understand tone, and how one can transfer that over into an additional visual representation. New to the film score game, iam8bit’s release of Swiss Army Man is very nearly the perfect encapsulation of such aims, matching film in both humanity and humor; beauty and silliness.

You have the insert, by Jared Weiss at GIPHY Studios, bolding the film’s title within “Swiss Army Manual.” The crudeness of the insert drawings, especially when our characters are at a distance, matches the manner in which Paul Dano’s “Hank” jerks Manny (Daniel Radcliffe) around respective “Montage” scenes. And despite an overreliance on the film’s first 15 minutes, the outer and inner gatefold panels bring beauty, bring isolation, and well, they’re really just a joy to look at. Artist Mark Englert is no stranger to vast landscapes, his work for the Journey soundtrack a similar approach, but its the inclusion of the cave (which lends its name to track 3), and its depiction as a distant, hollow heart that really places this work on another level. Considering we’ll be hearing Dano and Radcliffe’s voices all over the 47-minute running time, it’s critical the focus be on them in the center labels. The ocean recedes to the background, our voices (minus Andy Hull) come forward.

And you can’t get much more unique than the accompanying “paper doll playset,” which includes characters, the makeshift cinema screen, the ever-critical cell phone and related lock screen, along with many more pop-out figures. Piecing the scenes together again matched something on screen, this time the craftiness by which our characters move through the woods. It also allowed me to hide both the “Sports Limited” swimsuit issue and cheese puff standees on my wife’s desk. I decided to spare her the horror of the headless raccoon.

The sound quality of this pressing doesn’t quite shine with the same certainty as its outer shell, but it’s a pleasant enough spin. Considering “Montage” may be the best musical moment in film this year 1, we’ll start there. The low end of the percussion begins as a general rumble, vocals having to push through this in order to get to their rightful spot. This becomes a bigger issue toward the track’s conclusion, the drums a little too loud, the vocals drifting a little far. It’s a song that’s still entirely charming, but these issues, along with some surface noise as it goes into “Underwater” deserve a mark-down.

There’s additional surface noise going into “Where Did You Come From” and a few small pops at the end of “Cave Ballad,” but it’s nothing too damaging. The last issue I’ll touch on is well represented by something like “Hank Drinks,” the vocals losing definition as they proceed into the higher end. Dano’s voice, in particular, is given this ethereal quality under the production, but it backfires as it moves up, again, losing any present variation. Not fun on the ears.

I’m leaning heavy on the miscues in the early going, though, a little unfair. The vocal layering, the score’s weapon of choice, is often a triumph, the three characters — Hull 2 , Radcliff and Dano — firmly established and all given their own space. “River Rocket” is a great example of this, the Hull and Dano voices presented differently enough that they both lie in a different spot for your ears. You can follow either thread, grab both at once, or a little of each. The point is: it’s always easily discernible and never overcomplicated with tones running over one another.

“Cave Ballad,” despite those pops, is another standout, the line “I thought I was rescued” immediately memorable on wax. At these tones, you don’t lose that definition. And you’ll unlock another great moment if making your way to the end of Side A with “Cotton Eye Joe.”

In “River Rocket,” Hull peppers the track’s background with a repeating, “Everything everywhere matters to everything.” And it’s that philosophy, that interconnectedness they see in existence, at play here. We have a vinyl release that represents not just a few press images from a film, but one that represents its ideals, its expressions. “Everything everywhere” in the film matters in this release.

This soundtrack is currently sold out at iam8bit. Some pictures from iam8bit.