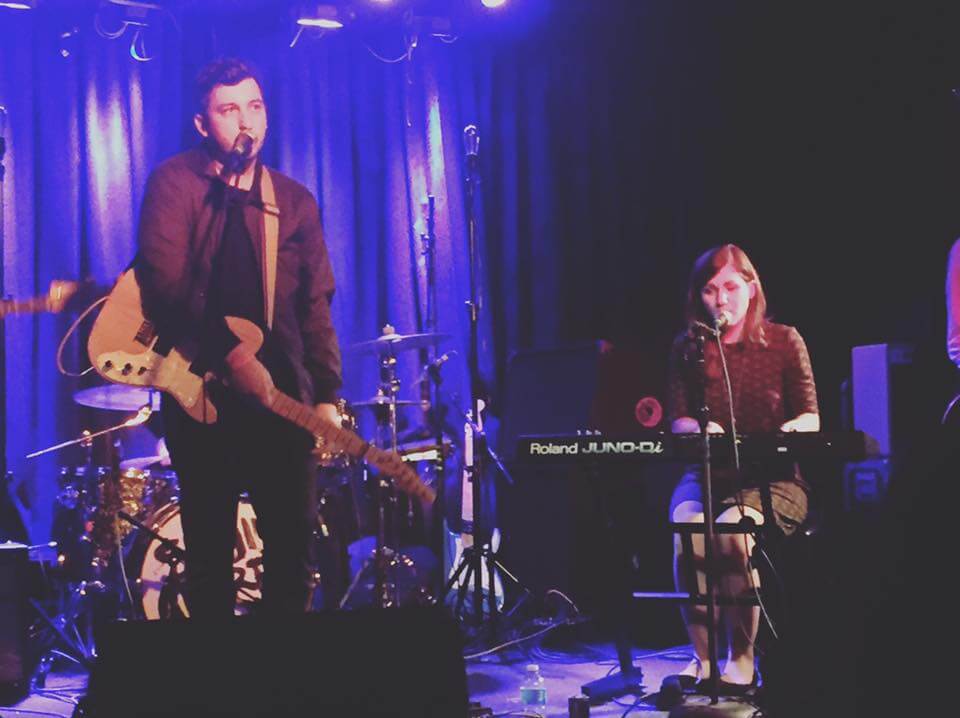 Wilder is a Chicago-based band consisting of Matt Murray and his partner, Kristen Donnelly. They’re a dynamic duo who are still new to the scene, but have some exciting things planned as they continue to grow and evolve.

We chatted with Matt via Facebook Messenger, and heard some interesting tales about how the band got its start and how a song came to be in an MRI machine.

Modern Vinyl: To start out, Wilder is still a fairly new band. How has 2016 been to you so far?

Matt Murray: It’s been exciting to say the least. We just released our debut EP “Keep You Here” and started playing shows. It’s different than previous projects where you typically play live way before you record any songs. It’s been a good challenge to adapt the songs to a live environment.

MV: Interesting. How do you prepare yourselves to adapt songs to any sort of live environment?

MM: We’ve been playing stripped down acoustic sets lately. We wrote all of these songs on acoustic guitar and piano so it’s been an easy adaptation so far. Also, the writing process for this set of songs didn’t involve a full band.

MV: Are there plans to eventually include a full band down the road?

MM: Yes there are plans to include a full band eventually. Due to our schedules and the logistics, it is difficult at the moment. It’s harder to put together a band when they were not part of the initial writing process.

MV: Okay, that’s actually pretty understandable. Since you’re part of a duo right now, how did you end up getting your start as a band?

MM: Kristen and I have known each other since we were kids. We’ve been together for about six years but didn’t start writing together until a few years back. We both knew of our musical upbringings but never entertained the idea of trying to write a song together. I should probably just say that we are couple. Wasn’t sure how to bring it up “properly.” Kristen is a choir director and is classically trained while I’ve been playing in rock bands since my early teens.

MV: That’s always a good mix! How has that actually impacted you? Like what’s it like actually being in a band with your significant other? Are there any challenges you two face musically because of that?

MM: It only enhances those creatively-inspired moments during the songwriting process. We already have a connection on a deeper level, so to speak, and writing songs together has only strengthened it. It can definitely be difficult at times because there is no hesitation to express or judge someone else’s ideas. We are both sometimes too honest in our critiques…it’s also a positive, though, since we can writer quicker without worrying too much about the others feelings. We live together so if someone has an idea we can work on it almost immediately.

MV: That doesn’t sound like a bad partnership at all. Speaking of songwriting…let’s talk about “Keep You Here.” What was your thought process like putting it together?

MM: The writing process wasn’t very habitual; we didn’t sit down with the objective to write a song. A lot of the initial ideas were “inspired” or “came to us” in some unusual places. Kristen wrote the first part to “High and Mighty” in an MRI machine. This was also our first time writing together, so we didn’t set out to sound like any particular bands or genres although I’m sure we were affected subconsciously by the music we were excited by at the time.

MV: First, an MRI machine? Sounds like an interesting tale! Second, what got you excited at the time when it all came together?

MM: The tale of the MRI machine is interesting haha. I think Kristen was just humming along with the high-pitched frequencies at the time. It started to get really exciting when we started working with producer Marc McClusky. The recording process was totally different than what I was used to, but in retrospect, [it] was the best decision for these songs. Because we had only heard our songs with bare instrumentation it was exciting to slowly see our little vision becoming reality.

MV: How was it different than what you’re used to?

MM: Traditionally the order of things is different in a full band recording situation. Marc used our acoustic demos as a template in order to build the rest of the instrumentation. He definitely played a big role in the song arrangements, as a template. We really wanted to work with a producer and Marc exceeded our expectations in fulfilling that role. We really just wanted to focus on the song itself without worrying about all of the noise surrounding it…if that makes sense.

MV: How’d you get acquainted with Marc? Like why work with him?

MM: I met Marc through Johnny Minardi. I sent Johnny a few demos and he referred us to Marc. We felt Marc’s style and approach to recording was the best fit for these songs.

MV: Looking ahead to 2017, what does that have in store for you guys?

MM: We’re looking to continue playing shows around Chicago in support of “Keep You Here.” We’re also most likely going to record some more new music this spring/summer as well.

MV: That all sounds very cool. Gearing up for a possible LP?

MM: Maybe!? haha probably just an EP at this point but we shall see, due to financial constraints.

MV: That’s all understandable. And now it’s time for a very ridiculous question unrelated to anything, haha. How ’bout them Cubs this year (while Da Bears just crash and burn)? That’s a great thing for Chicago!

MM: It’s incredible! I’ve been a cubs fan my entire life being that my Dad grew up very close to Wrigley Field. Da Bears have a long way to go. The only sport I religiously follow is baseball so it’s been very exciting!

After the interview, Matt emailed us a letter about the EP. It gives more of an explanation about how it came to be. It’s included in its entirety below.

It’s Matt here. The new Wilder EP “Keep You Here” is officially available digitally everywhere. I feel the need to say something about how Kristen and I started the project and elaborate on some of the personal hurdles we jumped through to make it happen. I’m sitting in our tiny rented house sipping my weekly small amount of whiskey so bear with me here.

Before Kristen & I started writing I tried to adapt a batch of pop-sounding songs I had written with four different lineups over the course of a few years. It’s hard to attribute ONE reason as to why these didn’t work out but I’m fairly positive it was because I wasn’t writing great songs.  I had listened to the demos too much…played them over and over past the point of second guessing…I was no longer objective at all about whether these songs had any lasting quality and was trying to force a line up together just because I had that itch to get “back out there.” Needless to say, I probably damaged some relationships because of it.  What I learned from it was patience. The ol’ cliché saying: patience is a virtue. It’s very true…especially with songwriting. I also discovered my best songwriting is typically with a co-writer.

Wilder started as a result of one of these lineups.  I asked Kristen to play piano for the project. This eventually led to us working on songs together. After six years of the occasional buzzed evening jam session we finally attempted what was so obvious it almost seemed ridiculous, that is, write a song together. Of course, we were both aware of our musical upbringings but just never entertained the idea of writing together. After a few healthy doses of wine, I grabbed my guitar and started playing a chord progression idea. In less than an hour the song was finished…lyrics, arrangement…everything. Not only was it seamless, and unselfconscious…we were proud and excited about the song.

The songwriting process for this EP wasn’t very disciplined. Most of the melodies “came to us” in some unusual places, like the intro to “High and Mighty,” which Kristen hummed to herself in an MRI machine to keep herself preoccupied…or the many times one of us woke up in the middle of the night with a melody we had to record on our phone in voice memos. I also should mention our experience working with producer Marc McClusky in NYC. He built the instrumental arrangements for these songs from the ground up, transforming our simple acoustic demos into a fully realized vision. He also wasn’t afraid to express his opinion when we needed to push ourselves more.

I can’t say I’ve ever been this excited about a first release. We can’t wait to continue recording and playing shows for the long haul. We’re already writing new tunes for the second release and planning some exciting things in the near future. Please take a listen to our new EP and ‘like’ our page!