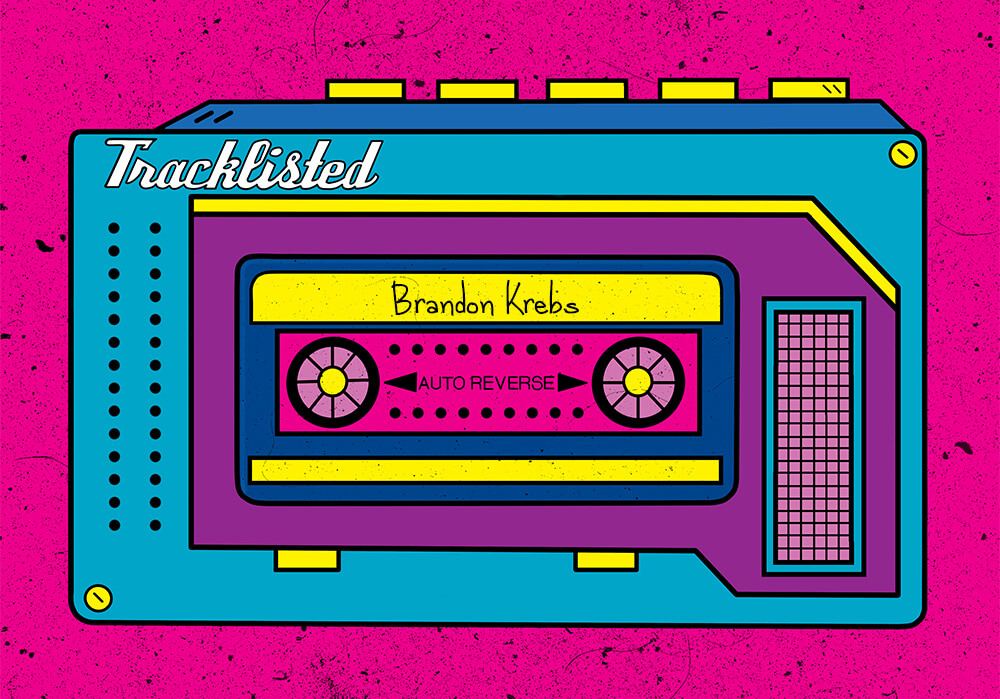 Brandon Krebs’ new full length record, Refuge In Exile, finds the artist moving from previous moniker Stranded Sullivan to something more immediate, and far more personal: his own name. Created within a “transitional period,” Krebs explains that “I have moved every December for four years and it has definitely shaped this record.”

“I guess if I had to boil it down and sum it up I would say Refuge in Exile is about the struggle to be myself and live the life I want to live instead of one you’re taught to want and pursue and its inherent struggles and losses and or compromises.”

For this newest edition of Tracklisted, Krebs provided Modern Vinyl with a selection of tracks that inspired him during the making of Refuge In Exile, along with explanations. Stream the record below and check out the selections.

I can’t remember how or when I heard this song, but after I did, I went onto Bandcamp and bought the whole album and wasn’t let down. The songs have a gritty, fuzzy home recording quality to them that I am very partial to. It’s nostalgia for early recordings I made on a four track when I started to realize I could actually write a song.  The four track was like a sketch pad where I practiced and experimented. Andy’s vocals have this wonderful, lonely, melancholic yet reassuring quality about them.  Like someone who is aware of the darkness and names it, but remains unshaken by it. Andy Fitts and this record have a *songs written from exile* quality to them.  Like a letter from a castaway on his own island. I saw Andy Fitts play live at the Tractor in Seattle and it was just him playing the songs on his guitar. The songs all held up well because, at their core, they are well made, which is something that I always try to remind myself.  If they are well crafted songs, you can play them with a full band, or a broken casio, and they will resonate with the listener.

I first heard this on the long car ride home from Spokane to Seattle; the endless I-90 Scablands before the Columbia River. A couple of friends and I were in our hometown for the weekend to see Neutral Milk Hotel. We went to see them in Spokane, the city we discovered them in, music that fueled our resolve to escape that city at all costs. We actually ended up meeting Jeff Mangum the next day, coincidentally, in the grocery store and talked to him about the show. It was surreal to meet the man who had been seemingly in hiding for 13 plus years and who re-emerged as some messiah like figure with a deeply devout following. This was a pretty alcohol fueled weekend and on the drive back we were sort of sitting in the car, in a quiet stupor, cruising at 70mph and not feeling our best. My friend who was driving turned his ipod on and the first few bars of “In the Fall” started. It completely captivated me.

The song was stripped down to organic instruments, which particularly resonated with me after the show I had witnessed a few nights before. The driving rhythm of the bass and drums seemed to kind of pick us up and dust us off and made us feel somehow more awake, somehow more human. The piano and string arrangements struck me particularly because I was working out so much material for Refuge in Exile on my 110-year-old upright. Some of the piano pieces I was working out, but that wouldn’t quite come together, fell into place once I got home and sat down at the keyboard. Sometimes you are just in the right state of mind to hear the exact right song at the exact right time. This was one of those.

This song is so pure and primitive and packed full of angsty aggression and drive that you can’t play it any way but very loud. It should be prohibited to play it below VERY LOUD. It has this great pulverizing punk quality to it that reminds me of early punk shows I would go see when I was 16. It’s infused with the perfect dose of ’80s pop; the chorus that drops into this perfectly sculpted pocket where the gritty, menacing, distorted guitars fall away and transform into the most perfectly used guitar bend I can recall, and the vocals drop from screaming out the words like a crazy person on the subway to a more melodic 3-foot voice. They don’t waste too much time before catapulting back into the verse, which sounds like some unhinged escape zoo beasts galloping into rush hour traffic. It is one of the better bass lines I’ve heard. That and the gritty production of this song greatly effected my approach to “Alarm Pheromones.” I wanted something that had that same unhinged, let loose, bar fight that you could’ve avoided but decided not to quality to it on the record.

I listened to Embryonic a lot leading up to and during the making of Refuge. A lot of the songs on that record had some influence here and there. Predominantly, it’s the use of little, simple synth parts that seem to create these anemic, little atmospheric melodies and they build an entire song around them.  The use of distorted bass is great throughout the record and I really love the bass lines in general. They incorporate a lot of crackling, popping sounds, like equipment malfunctioning or guitar cables being unplugged, ripped out of the guitars while the recording was taking place. The Flaming Lips can take a sparse landscape and then paint it with beautiful string arrangements and harmonies and suddenly, you have some sort of chorus. I love the experimental quality of this record. How loose it is and how they seem to play with space and honor it by just letting the tape keep rolling when they aren’t really playing parts as much as just letting their instruments and equipment running and humming along with the last dying notes they play. Listening to the record in its entirety really made me think about songs and structure differently.

The record Currents is well done and well produced and though I don’t entirely relate to the lyrics, when I can understand them, I love the bass driven grooves with which this record is loaded. His approach to sound is meticulous and the results pay off.  Ethereal synth tones that are familiar but welcome. As fun to listen to in headphones as speakers. I tried to make bass a prominent instrument on Refuge, not just a low frequency that fades into the background, but a major player, much like this Tame Impala record. It helped reinforce the idea.

While I was making this record I would go over to my girlfriend’s house and she would often put Little Criminals on the record player. The song “Baltimore” has this reflective, driving around at night when you’re stuck in your head quality to it. This record is very comforting to me to listen to. Somehow when Randy starts singing his music, [it] conveys this idea that everything is kind of fucked up, but it’s going to be ok because he already took all the punches and it’s all over. He’s just here to tell you the story. I am a sucker for this kind of catchy chorus.  He’s a good storyteller and when he sings he compels you to listen. I have a great affection for this album and the memories that go along with it. Seventies piano driven pop/rock in general had a great influence on Refuge in Exile.

Because of Leonard Cohen I will never forget that words matter. Story matters.  He is, in my eyes, the ultimate wordsmith and musical storyteller. He has such ability to draw the listener in to his stories that you almost fall into them, like the characters he sings about. “The crumbs of love that you offer me, they’re the crumbs I left behind” is one of the best lines on the record. If you feel like you’ve written pretty good lyrics, listen to an entire Cohen album and read the lyrics as it plays and you can almost guarantee you’ll go back to the page to revise and refine. LC would often spend years finishing songs that weren’t quite ready for completion in his mind. Sometimes you have to wait until the songs are ready to reveal themselves to you and not rush them. A mentor used to tell me that writing is rewriting. I think Leonard heard that same piece of advice or at least followed it.

I was flying to New York to meet my girlfriend for her birthday the day this record was released. I got up early to get to the record store at 10 so that I could buy it and put it on my iPod. I listened to it three times on the plane to New York. Some of my favorite lyrics are written and sung by Matt Berninger. Aside from the memories that ensued and listening to one of my favorite New York bands in New York, I really loved the desolate quality of the pianos on this song and how it starts to build. It had a large hand in influencing “This Old Line” — the piano chords even sound similar and how they are played, but I actually wrote the piece years before this record came out, only on a synthesizer. After listening to this record 20 times, I decided to strip it down and make it piano. I didn’t know where to take the song at the time, but after listening to this record, it helped clear the way and I started to build what is now the completed song.

They have consistently been my favorite band for the last several years. A lot of times a favorite record will be one that I discover on a trip, or a journey, or when traveling. This song was the first one I heard on the record while I was in Kilkenny, Ireland, right before they released the record. The Lower Dens is unique in that if you deconstruct all the parts of the songs, they are unremarkable on their own, but when you put them all together, these wonderful songs erupt to life. This often puzzles me and makes me wonder how they develop songs. Jana Hunter’s voice is one of my favorites. Her melodic sense is so rich and powerful and they are an amazing band to see live. There are records you listen to when you’re happy, there are ones you listen to when you’re sad or doing the dishes, or driving around running errands, or driving across the state, but “Escape from Evil” has this quality that I can’t quite put my finger on that lends it to all experiences — you can listen to it and enjoy it when you’re doing the dishes, or cooking, or on headphones, or driving to work, or when you’re having a bad day, or happy, or sad. That is a remarkable quality that I would love to be able to create.