Review Roundup: The Fountain/Troll 2/The Fray 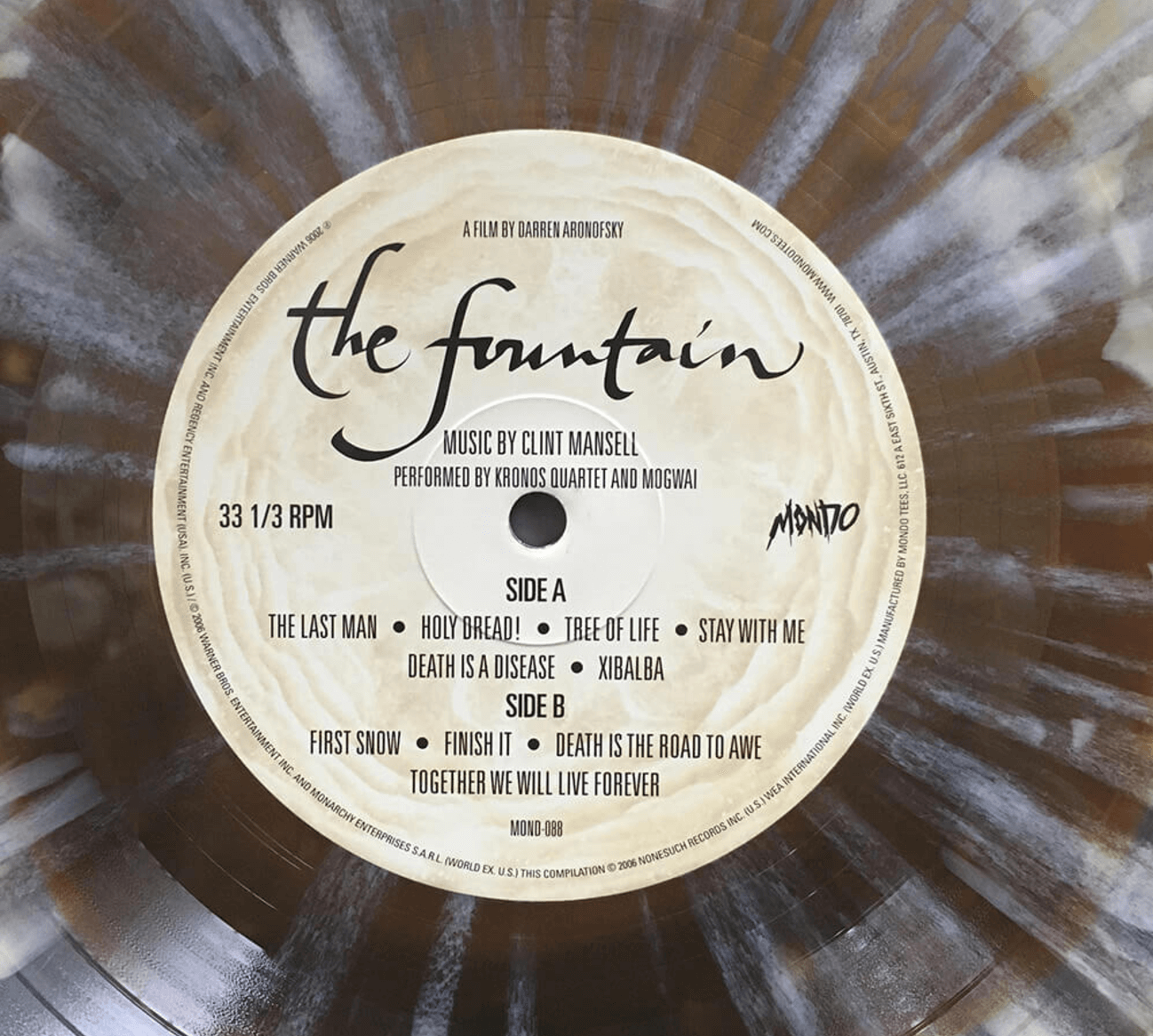 It took a couple copies here to settle on my sound quality take, as the first had some noise issues. Reading through some forum chat on this pressing (I have the MondoCon variant, tan inside clear with white splatter), I went the route of others and grabbed a replacement disc, which Mondo has been kind enough to be sending out. And while the beginnings of both sides were still quite noisy, and the opener to side B suffered similarly, there was marked improvement. Given the status and acclaim of “Together We Will Live Forever,” that seemed like a nice comparison point, and again, the replacement copy reigned supreme. It’s a quiet pressing, as well; having to really turn it up for review purposes probably exasperated the noise issue. A standard listen may be a little more forgiving.

Looking past this, you do have some standouts, like in “Tree of Life,” or the culmination of “Death Is The Road To Awe,” in which I was suitably taken aback by just how much sounds crystal clear within the complex arrangement. There were some minor hiccups, though, like in “Holy Dread!,” where you can’t really pick up details going on beneath the beat, but the mastering was often above average.

The packaging is a clear standout from 2016. We named the MondoCon variant one of our “Top Variants of 2016,” while Nicole Gustafsson’s artwork is, in a word, stunning. My one, minor qualm comes in the tracklisting on the back cover, which isn’t broken up into sides. The insert, modeled after the film’s titular manuscript, starts with a message from composer Clint Mansell, transitioning into an illuminating interview. It ends with credits for both the original soundtrack and this vinyl release. The record is packed in an anti-static inner sleeve.

While the film jockeys for position in the all-time “Best Worst” rankings, the score surprisingly bypasses this qualification when praised. Carlo Maria Cordio’s work is simply….good. Throwing it on the turntable offers up the same surprise; a very clean pressing, backed by some strong, well mastered (by the soundtrack regular James Plotkin) moments. You get a crystal clear beginning to Side A, and while there was the occasional “pop,” it’s well above average in this category. In “Goblins Are Coming” the drum work is a little weak in regard to the mix surrounding it, but the highs of the “intro scene of a video game” synth arrangement should immediately bring a smile to your face. The majority of the 18 tracks deal in low-end synth, but there’s some nice differentiation going on. You’re able to track the alterations, you’re able to ride the wave, and it never becomes that dreaded “general rumble.”

This soundtrack has some out-and-out jams on it. The bass on “Spring Through The Forest” hits hard, and while the drums need their own space in this arrangement, the key work has needed room. “The Witch of Popcorn” employs great balance between beat and horns, as well. You get a nasty riff in “They Are Not Farmers,” but the organ doesn’t have huge punch (that may be a recording thing, not mastering). If you’re a fan of Ted Shapiro and Craig Wedren’s more modern work for the Wet Hot American Summer soundtracks, this should be in your rotation. Carries the same charm, especially in the upbeat moments.

Packaging wise, Lunaris gives you a die-cut cover, with two possible sides of an inner sleeve. On one side, you get Joshua, our protagonist, with his grandfather looming over him, and on the other, the goblins (don’t ask why goblins are in a movie called Troll). I had only heard the composer speak briefly in the Troll 2 documentary, Best Worst Movie, so the interview on the additional insert was welcome. And the art on the flip side of that insert, by Devon Whitehead, is a huge highlight (Whitehead will guest on our Missing Artwork podcast soon). Extra points for including the general store owner and having the family stand on that disgusting cake. If you’re not getting any of these references, well, you need to see the movie. The variant I reviewed was a translucent green.

And extra points for whoever put the message in the runout groove.

The Fray — How To Save A Life
SMLXL Vinyl

SMLXL reissued a couple full lengths from The Fray in 2016, with both How To Save A Life and ST getting second pressings. You’re looking at a 2xLP set here, housed in a standard stock, gatefold jacket. Lyrics are printed on the inner gatefold and the records slide easily out of each side. The color on the front cover image is also a little muted, as compared to its CD counterpart (I much prefer the increased ambers of the CD). The vinyl color would probably prefer that CD cover, as well, given it’s a “Buttercream” (yellow, orange and white marble).

All you really need when judging sound quality is a side-by-side with what’s currently on Spotify. I did this for Side A; “She Is,” for example, is a jarring comparison, the chorus of that opener muddy on digital, while much improved here. It’s given entirely new instruments, with what sounds like a tambourine resting at the bottom. That doesn’t often occur; entire portions (critical elements) just lost in digital. You get much clearer vocals in a song like “Over My Head,” along with lively percussion, while the entire low end is much improved in TV medical drama staple “How To Save A Life.”

All in all, we have a record that should sound great (organic pop music) and it sounds great.