The One After: The Wallflowers — Breach 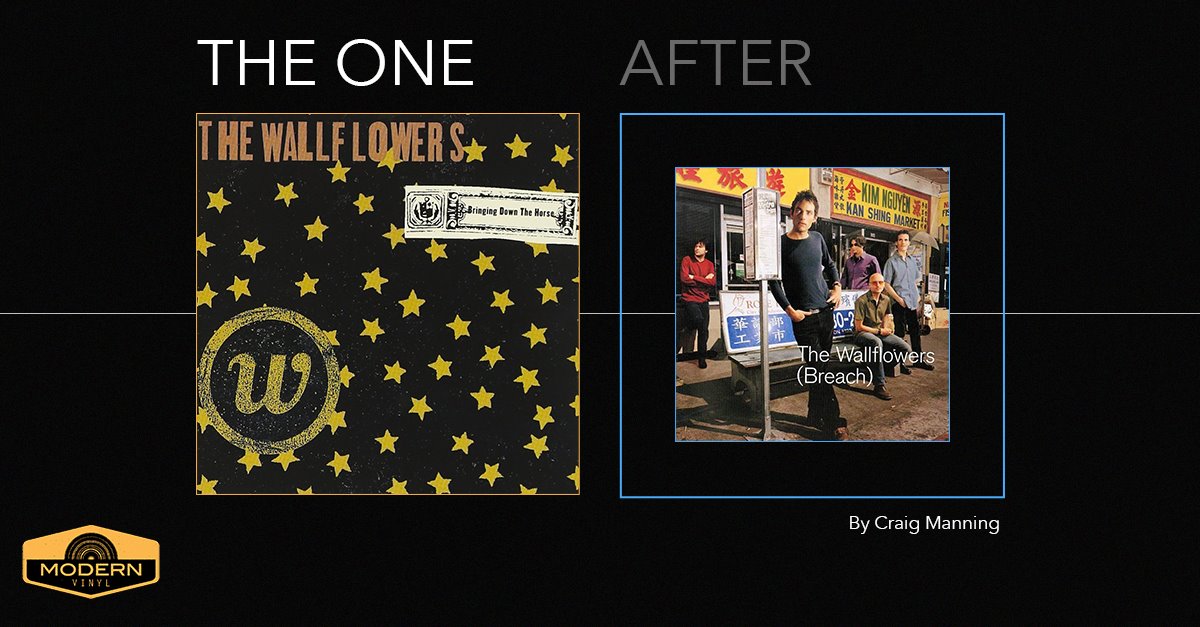 The One After is a new feature that will see Modern Vinyl writers taking on the album AFTER the peak. In other words, what did a band do to follow up their greatest record? How do you follow up “Blonde On Blonde?” What about “London Calling?” Did the artist build off their success, recoil from it, or land somewhere in between?

It’s an honor to take on the first entry in Modern Vinyl’s newest feature, but also a challenge. There were several directions I could have gone based on the prompt I was given for this feature: “What did a band follow up their greatest record with?”

It’s a loaded question — not least because “greatest” is almost always in the eye of the beholder. As I scrolled through my iTunes, trying to find the right album to write about, I considered numerous definitions of “greatest.” In terms of quality and influence, few would argue, for instance, that Bruce Springsteen’s Born to Run is his greatest record. However, Born in the U.S.A. was his most commercially successful. Either album could feasibly be labeled the Boss’s peak, which means that both Darkness on the Edge of Town and Tunnel of Love would have been fair game for this feature. And that’s all without even considering subjectivity! What if I thought Magic was Bruce’s best record? (Spoiler: I don’t.) Would it be reasonable for me to write about Working on a Dream as “The One After”? (Spoiler: It wouldn’t.)

Rather than incite any arguments, I tried to settle on a fairly uncontroversial choice for the inaugural entry of “The One After.” I looked for albums that were the unquestionable peaks in the careers of their respective artists. I wanted to find an instance where my favorite album from an artist was also 1) their consensus “best” record, according to fans and critics alike, and 2) their obvious commercial zenith. Then, I wanted to turn around and look at the album that came next.

This search led me to The Wallflowers.

There’s probably no one on this planet who’s going to try to tell you that anything other than 1996’s Bringing Down the Horse is The Wallflowers’ greatest record. Commercially, it was a behemoth. This record went quadruple platinum, scored multiple Grammy nominations, and spawned four sizable hits, two of which (“One Headlight” and “6th Avenue Heartache”) you undoubtedly know by heart if you were old enough to listen to the radio in the 1990s. It also made Jakob Dylan (son of Bob) into a superstar and even got the band a performance slot with none other than Bruce Springsteen at the 1997 MTV Video Music Awards.

Bringing Down the Horse is also unquestionably the band’s best record, stacked with classic deep cuts like “Angel on My Bike,” “Josephine,” and “God Don’t Make Lonely Girls.” Unless you’re a die-hard Wallflowers fan like myself, Horse is the only one of their albums you know at all (though you might have still bought the 2xLP reissue of it from last year). I’d wager there are a decent number of people who don’t even know The Wallflowers have other records. Plus, I’ve been a fan of the band for three-quarters of my life and I’ve never seen anyone make an argument for anything other than Horse as their peak.

All these factors make The Wallflowers the perfect band to put front and center here. Not only is no one going to argue with Bringing Down the Horse as the band’s best record, but there are also a lot of interesting questions to be explored when discussing their “One After,” 2000’s Breach.

Let’s start with the most important question: What the hell happened? From 1996 through 1998, these guys were on top of the world. They scored three top 40 hits! “One Headlight” went to number 2! They won both “Best Rock Song” and “Best Rock Performance” at the 1998 Grammys (both for “Headlight”). They jammed with Bruce fucking Springsteen! If they’d dropped a follow-up in 1998, there’s a chance they’d be Foo Fighters-level famous today.

But they took their sweet time. Bringing Down the Horse dropped on May 21st, 1996 and proceeded to light up the radio airwaves for the next two years. Even after airplay started to peter out, though, The Wallflowers still took another two years to release their third record. (Contrary to common belief, Bringing Down the Horse is not The Wallflowers’ debut album. The actual debut is a self-titled record from 1992, which is forgotten in part because it isn’t very good.) Breach, the long-awaited follow-up to Horse arrived on October 10th, 2000 — nearly four and a half years after the record that made Jakob Dylan and company into stars. They took so long that their “long-awaited” new album became something that neither listeners nor the radio were interested in anymore.

Quite fairly, Breach was regarded as a commercial failure. The album peaked at 13 on the Billboard charts, spawned zero successful singles, and started a law of diminishing returns for The Wallflowers that continued until their as-of-now final record, 2012’s Glad All Over. While Breach didn’t move the needle in terms of commercial performance, or broader cultural influence, though, it was hardly a failure from an artistic standpoint. For good reason, the album received more than a few stellar reviews, including a four-star Rolling Stone write-up, which favorable compared Dylan’s songwriting to that of his old man, and a rave All Music Guide review, which proclaimed it “the finest straight-ahead rock album of 2000.”

Breach has never been my favorite Wallflowers record. Bringing Down the Horse was one of the first albums I ever loved as a kid (“One Headlight” was the first tune I ever labeled as “my favorite song”) and has continued to influence my tendencies as both a listener and a songwriter ever since. Of the post-fame Wallflowers albums, meanwhile, Breach is not nearly as solid as 2006’s Brendan O’Brien-produced Rebel, Sweetheart. (Sweetheart is a true, unheralded masterpiece that I recommend to everyone reading.) However, it wouldn’t be unreasonable to call Breach the most honest album that Jakob Dylan ever wrote.

When I found this album in a bargain bin in 2004, I was astounded to lay eyes on it. I, like many of you, had also lost track of The Wallflowers after the ‘90s. I was equally astounded when I put the album in my CD player and started reading through some of the bitter musings that Dylan was putting forth in the songs. Before this album, Dylan had always refused to write about his father. He couldn’t control the fact that people were going to compare him to good old Bob, but he always tried to be his own man and his own artist when he could. (There’s probably a reason that Jakob waited 12 years after his band’s breakthrough to make a solo record.)

On Breach, though, Dylan broke his own rule. “You won’t ever amount to much/You won’t be anyone/Now tell me what you were thinking of/How could you think you would be enough?” Those bitter words come from “Hand Me Down,” the album’s finest moment and also its most cutting. When I first heard the song, I thought that Dylan was taking the pissed off breakup song thing a little too far. What could a woman possibly have done to this guy to deserve such foul, unfettered insults? Eventually, though, I came to realize that Dylan isn’t talking to a girl in this song. He’s talking to himself. “You feel good and you look like you should/But you will never make us proud,” he sings in the chorus. The song is a reflection of growing up in the shadow of a legend and feeling like you’ll never be able to accomplish something of your own. It sets the mood for the dark and dusty Breach.

There are other songs on this record that seem to be about Bob Dylan, too. First single, “Sleepwalker,” starts with the line, “Maybe I could be the one they adore/That could be my reputation,” while the cryptic “I’ve Been Delivered” describes a near-Biblical exodus from home. The funereal march of “Mourning Train” even sounds a little bit like a Bob Dylan tune. While timing was always going to be Breach‘s biggest problem, the moodiness of the lyrics also probably had something to do with The Wallflowers’ downfall as a mainstream draw. Sure, the songs on Bringing Down the Horse weren’t exactly straightforward. To this day, I’m not certain if I hear “One Headlight” more as a song about the death of a relationship or the death of a person. (Jakob Dylan has said the song is about “the death of ideas,” which does not clarify things much.) However, a lot of Bringing Down the Horse was about love or heartbreak, and those ideas resonated with radio listeners in the mid-1990s. In comparison, Breach is more ponderous, more meditative, and way less relatable.

Personally, I’d say the songs here were still catchy enough to be on the radio. The zippy, Eagles-flavored guitar work in “Hand Me Down” is dynamic and interesting, while the hook in “Sleepwalker” (complete with a Sam Cooke allusion) is a genuine earworm. But even if “Letters From The Wasteland” and “Some Flowers Bloom Dead” sounded like Petty-style anthems on the surface, they were filled with darkness, doubt, and bitterness — characteristics that weren’t exactly in vogue during a year when the top two songs on the radio were Faith Hill’s “Breathe” and the still-inescapable Santana-Rob Thomas collaboration, “Smooth.” The sound of the album also didn’t “pop” quite like Bringing Down the Horse did, a product of Horse producer T. Bone Burnett not returning for another round behind the boards. These factors, combined with the long wait time between albums, meant that Breach failed where its predecessor succeeded. But even if Breach will forever be a “One After” in the annals of pop music, it’s still a damn fine record, filled with classic-leaning, well-played roots rock. Nowadays, it would probably be classified as a country record. Back then, it was the last gasp of the folk-rock resurgence of the 1990s. Either way, it’s an underrated, overlooked gem that deserves a listen — especially if you’ve never delved into The Wallflowers past their big mid-90s breakthrough.


Tags: The One After, The Wallflowers