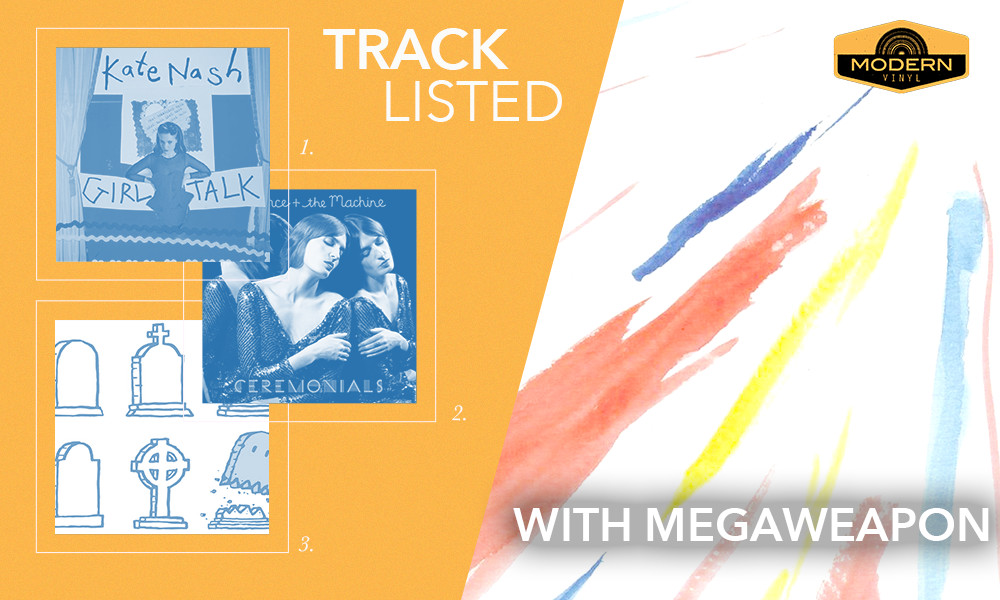 Long Island’s Megaweapon takes in sounds similar to Cayetana, Slingshot Dakota and No Doubt. For this week’s Tracklisted, Michelle Turk, the band’s vocalist, put together a playlist of songs for us about what influenced their latest EP, Behind Glass Walls.

“Roughly a year ago, we took Megaweapon to the studio to meet with our friend/engineer Nicholas Starrantino to discuss the creation of a record. We were high off of playing a show at which a bunch of people were shouting the words to one of our songs in our faces; ready to go out and take over the world somehow. Ready to work 3-4 jobs at a time in order to pay for it ourselves. A year later, we have Behind Glass Walls and so much excitement to share about the process of creating it. These are songs that influenced Behind Glass Walls musically, lyrically, and in production.”

“Reaper” is one of my favorite tracks off of This is Acting by Sia. The record This is Acting came out only a few weeks before we hit the studio and I fell in love with it. The song was originally written for Rihanna (like so many of Sia’s songs) and co-produced with Kanye West. Although you’d never guess it from our music, Kanye West’s style of production comes up in conversation quite often between Nick and us. Even though we are not fans of his personality, the man is a mad scientist when it comes to synthesizers and I personally couldn’t stop listening to the synth organ in the chorus. I told Nick about it and we tried to create our own version of it in the bridge of “Eyelids.”

Cage The Elephant — In One Ear

“In One Ear” is a tune from Cage the Elephant’s self-titled record. Lyrically, the song is basically their “fuck you” to people shit talking them and wishing they would fail. Their attitude about what people think about them is very much in line with ours. We are generally pissed off people, which fans the flame for us as musicians. Like Cage the Elephant cites already being on their backs in the lyrics, we have nothing to lose but money to make songs we love. Their blues style is very obviously an influence for us with the synth and guitars and bass tones, especially in “We’re Legally Not Allowed to Talk About It.” “We don’t do it for the glory, we don’t do it for the money,” we’re just making music because we love it just like Cage the Elephant.

Say Anything — Admit It!!

“Admit It!!” from Say Anything’s …is a Real Boy was one of the first records that Andrew and I connected on while writing. Max Bemis’ angry, tongue-in-cheek lyrics and performance has been a constant presence for us as an influence. Especially in “Strictly 80s Joel,” there is a verse where I am speaking and it sounds almost like I am shouting at someone in the echoes of my mind, which is often what I imagine while listening to Say Anything. I read somewhere that Max Bemis will skip going to the bathroom before recording to give his voice an extra layer of urgency, and I also do this until it gets in the way of thinking. I think over time as Andrew’s voice has grown, I hear a lot of Bemis in his voice in his. Also, the groovy and busy bass lines and hard hitting drums often remind me of my bandmates’ style. It’s the perfect mixture of punk, indie, and theatrics, which is exactly where Andrew and I come from musically.

A lot of people we’ve met look at Paramore’s self titled record as this pop record that betrays their old sound a bit too much. We very much disagree. I personally found this record to be much closer to the punk style of music that I know Hayley Williams listens to. Anyways, letting go of what people think and say from behind the glass walls of their smartphones and tablets was very much an inspiration lyricallym and I always felt sense of relativity to these lyrics, especially trying to let go of being people pleasers.

Slingshot Dakota — Until The Day I Die

Slingshot Dakota was one of the very first bands we played with and vocalist/keyboardist Carly Comando has always been a huge inspiration to me. I started playing keys in a band because she rocks so much. “Until the Day I Die” was on their record Their Dreams are Dead, But Ours is the Golden Ghost, but honestly a vast majority of their discography was such an influence in the indie-pop style piano and keys in “The United Shakes of America” which I think holds the same sort of hopes and dreams for love as “Until the Day I Die.”

Where Carole King’s groovy bass, guitar licks and hard-hitting rhythmic piano meet her soulful voice and lyrics, where she is not afraid to express her sexuality, has always inspired me. She paved the way as a strong woman, so that later singer-songwriters who are women could make more rock and roll. This song definitely is a reflection of the kind of emotions I felt writing the anxious and sexually charged lyrics to “The United Shakes of America.” The song is very much about the very overwhelming feeling of having a thing for someone much like the Shakes.

I was listening to overwhelming amounts of Kate Nash’s record Girl Talk while Andrew and I were writing “Strictly 80s Joel.” The lyrics are basically about a friend who is treating you like dirt, which is 100% where Andrew and I were coming from when we drunkenly wrote and rewrote “Strictly 80s Joel.” Kate Nash is one of the modern riot grrrls whose tongue-in-cheek delivery of rock and pop is one with my heart. The best part of this song? The outro when she rips into a guitar solo and then there is layered harmonies of “I said you were cool.” Andrew, Erik and I vocally eat those sorts of things up and love to make counter melodies and harmonies in every opportunity we can in our songs.

Florence and the Machine — Shake It Out

Ceremonials by Florence and the Machine came out concurrently with the time that “I Won’t Die” was written in 2011. The anthemic shouted chorus of “Shake it Out” while singing about regrets and growing through tough situations was very much where my friend Chase and I were at writing “I Won’t Die.” It’s such a big, full song without being overwhelming, you can dance to it, and is as pretty as is it is tough. That’s what I think is the appeal of “I Won’t Die.” Flo Welch’s unique vocals have always inspired me to just sing the way I want to, no matter what anyone thinks, and I think Nick helped me bring that out the best in the studio.

Grouplove — Let Me In

Going into VuDu Studios, we as a band intended to put out a record that was laden with synthesizers without losing its rock feeling. A band like Grouplove, with their male/female vocals, fun mixture of punk rock meets indie rock, and just overall unique style has been very influential to us in creating this record. Their drummer and producer Ryan Rabin (also known as Captain Cuts) is a favorite of mine. “Let Me In” was a single written for The Fault in Our Stars soundtrack.

Lastly, we can’t pass up mentioning our engineer as an influence who plays as Martial and also played with Love, Robot. His record Things Fall Apart wasn’t on Spotify so I’m including my favorite Love, Robot tune, which is “Machine.”

Behind Glass Walls is available now, via the band’s Bandcamp page.