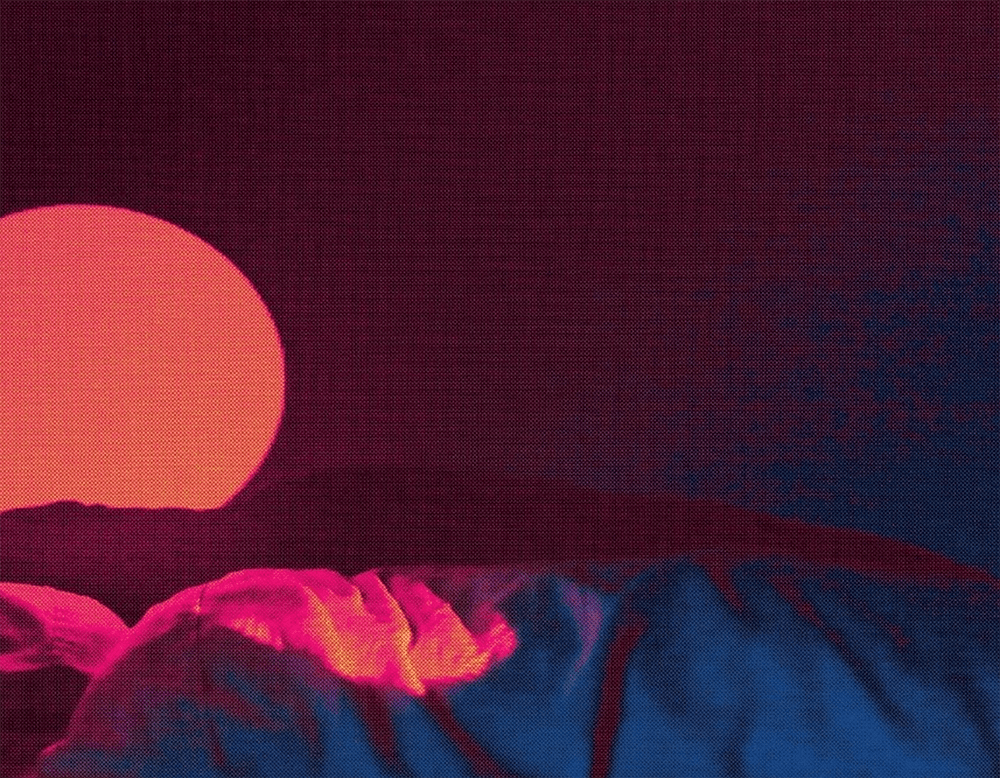 The Halftones of Religion and Recovery

Susil Sharma has a stomach for irony when recounting his father’s first experience with rock music. The scene unfolded in an Illinois bar; a song blared over the establishment speakers, and Mr. Sharma — a Nepali emigrant — covered his ears and ran out. The story comes shortly after Overnight, the debut LP from Susil’s band Heat, is released via San Diego’s Topshelf Records and The Hand Recordings in his native Canada. As the trio’s first real chance to “have more resources to play with,” the record dips into every inch of Sharma’s socialization with the rock genre. The “crazy delayed prog stuff” he explored as a weed-smoking teenager lingers in the climbing ambition of “Still, Soft,” where guitars wail and twist until overtaken by Susil’s synthesizer endnotes. The glitzy indie of The Strokes’ Is This It — a watershed record in his musical history — propels first single “Sometimes,” where a soloing riff intersects with matter-of-fact percussion for a straightforward ride. That being said, perhaps there’s an awareness of long-standing influences petering through the album’s running time, as Sharma admits that Heat “doesn’t just want to be a ‘throwback rock band,'” but also an ever-evolving outfit destined to “keep guitar rock alive.” Sorry, Dad.

And while Overnight does exhibit guitar rock’s desire for thick and pulpy tones — “Long Time Coming” and its screeching post-punk opening is a good example — this full-length deals more in halftones than anything else. To dial down intense instrumental polish is to unleash an abstraction of messages, a measure of distance. This is even communicated in the cover art shot by Brian Vu and filtered via Hugo Johnson. “He took the image and put it on an old TV. It fits with the darker sound of the album.” What’s broadcasted back to the viewer is rustled bedsheets while a moon looms above. There’s no couple nestled under the covers, no assumption of intimacy at all: just desolation. (Sharma also mentions Overnight‘s homages to the 1984 drama Paris, Texas in its color scheme and typography, which shares similar themes from the onset.) 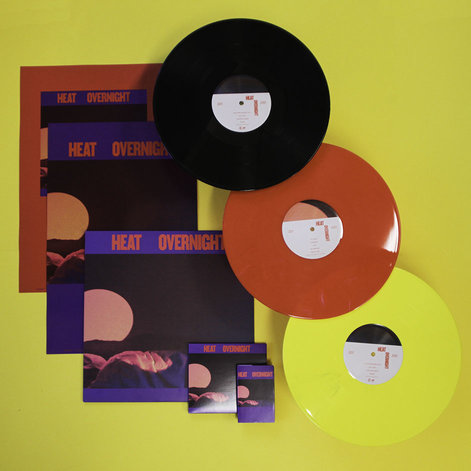 While Sharma has “sold records to buy more guitar pedals,” the vinyl configuration of his band’s LP has a first-pressing palette perfectly suited for the band’s name and visual storytelling, with the 180-gram black version a standout purchase for listeners interested in this Montreal outfit’s commitment to texture. There’s even a cassette version, which calls back to Susil’s sister’s collection of Nirvana tapes in his youth. (Courtesy: Topshelf Records)

Overnight was recorded in December 2015 alongside Grammy Award-winning producer Alex Newport, known for his spare, reverent work with City & Colour, and for measuring the calculated madness of At the Drive-In. The songs have changed from the Newport-blessed versions, so Sharma’s allegiance to a “Rickenbacker [played] through a Fender” may shift while performing through the summer, including a stop this spring at SXSW. “A guitar is a tool to convey an emotion, rather than to be trapped by an emotion.” That being said, the emotional weight of the recording process isn’t lost on Sharma, despite his separation from it. “I got sober while we were recording. I had a four-year relationship that ended right before the record came out.”

These two matter-of-fact statements haunt the record, but carry more spiritual than somber reflections. “Chains” closes the record with Sharma exclaiming he’s “got a fever in [his] soul, man/[he’s] been hard on it past the limits of control.” Those confessions are delivered in Sharma’s smoky, exasperated bark, but the seven-minute track has plenty more for him to power through. While Heat’s three other members rattle and simmer behind him, Sharma “feels the spirit/and it shakes [him] to the core/father, son, and holy ghost.” This isn’t the first mention of religious figures in the Heat doxology, as the first line of the entire record draws out the phrase “the holy mountain” as if Sharma is climbing the length of those three words to some personal summit. In a more holistic sense, these potent names function as an agent of positive change, even when they’re not called out in song. On “Long Time Coming,” we’re greeting a similar scene as the album art where “shade is hollow,” but as the energy builds from a warbled, charging rhythm section, the setting shifts to “a valley soft” where it’s “good to be alive and winning.” Pairing the imagery of soft self-awareness and hard-edged hollowness speaks much to Sharma’s road to recovery. It’s a rocky and somewhat contradictory road here, but it’s an inspired journey progressing in cautious bursts of Overnight‘s obsession with neon-tinged soundscapes.

As far as the record’s understanding of the interpersonal theater, Overnight spends less lines dedicated to the action and drama shared between Sharma and his former partner, Erika King. (Remember, the breakup happened after the album tracks were laid down.) Yet, where the album deals most in halftones is on its midway point, “Rose de Lima.” Borrowing heavily from Britpop’s delayed guitar and slow-burning snare play, the track features a spoken word performance from King herself delivered entirely in French. A crude translation offers up this poetic indictment: “Our shadows fly away and you become crazy.” As the LP’s halfway mark, the record splits between two halves of equally buoyant and contemplative material, and this foreign-language excursion is a moment of pause, an introduction of the hyperpersonal.

Yet, this may just be an album cycle observation. On Heat’s previous EP, Rooms, a track called “25” detailed a pending quarter-life crisis. Now 28, Sharma admits “it’s really kind of interesting to see what I was going through [as] it seemed more visceral at the time.” That’s not to say Overnight has no potential of remaining visceral and intense — the opening clamor of “City Lights” will always shoot out of the gate with abandon — but perhaps, its meanings will shift for an adapting audience. “That’s the responsibility of an artist: you just come up with an idea. I strummed a few guitar chords. I find it important to give up that ownership. It’s just a rock song.”

But as the first full-length from Sharma’s first band in eight years that hasn’t folded out of failure, nor despite its core lineup rearrangements, Overnight isn’t just a rock record. It’s the beginning of songwriting which converges the personal and the prophetic, the individual and the inspirational. It’s worth opening your ears over.

Overnight is out now via Topshelf Records and The Hand Recordings.