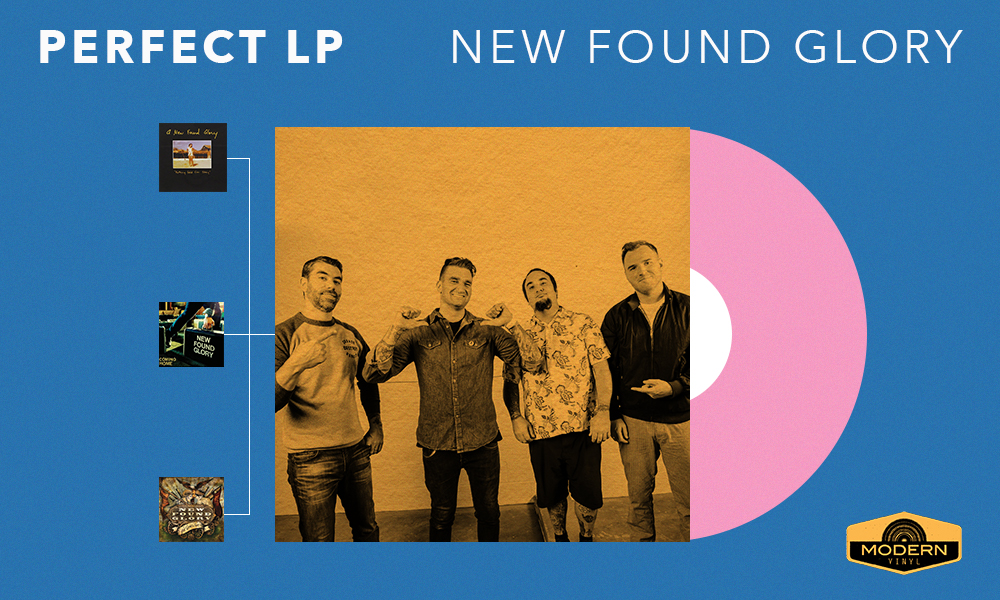 New Found Glory. 20 years deep, the band will go on a near career-spanning tour this spring, playing albums in full, from Nothing Gold Can Stay to Not Without A Fight. What better time to analyze their career? Commercially, the band peaked at Catalyst, hitting #3 on the Billboard 200, riding a post Sticks and Stones/”My Friends Over You” wave, but the artistic path and peak is not so clearly defined. A leap into the “mature” with Coming Home (an album that’s still pretty much about girl problems), highlighted by a severe vocal alteration, is considered by some their crown jewel, while others prayed for, and got, a return to the breakneck pace of old by the time Not Without A Fight hit stores. And I’m sure, somewhere out there, there’s listeners who count Sticks and Stones as their “best” (don’t be in that tragic category).

Issues abounded as I attempted to sort the band’s near 130-song studio discography (this includes the cover records and does not include some demo tracks, or Tip of The Iceberg) into something resembling an LP. Putting a Catalyst track next to one from Coming Home, and beyond, risks vocal whiplash, an incredible progression throughout the 20 years. Seriously, go listen to “I Don’t Wanna Know” and then “On My Mind.” BUT, if you go back to Nothing Gold Can Stay days, there’s a lower register at work, allowing for those songs to somehow work alongside the later career. “2’s & 3’s” can now, somewhat, sit next to “Don’t Let Her Pull You Down,” or at least enough that I can validate it.

On a more sour note, the lyrics of Steve Klein are ever-present in a dissection of their career. Given their penchant to writing love songs, and his eventual charges, it’s obviously a black mark on the band’s output (he was often identified as main lyricist in these circles, although others contributed). I fear going any further, at risk of trivializing what actually occurred to actual people (as compared to this trivial exercise). It had to be mentioned.

Clocking in right under 50 minutes, Coming Home/Not Without A Fight are the most dominant, with 3 tracks each, while Radiosurgery (their most underrated), Nothing Gold Can Stay, and Sticks and Stones all have 2 contributions. Sorry Resurrection fans. Your place is not here.

It’s not even the opener of its respective record, but the Benmont Tench keys kicking off Coming Home‘s lead single are just about irresistible. Dealing in relationship distance, frontman Jordan Pundik described the song as dealing with “an argument or a fight and it’s over the phone, so you can’t console them and it sucks,” reflected in lines like, “A sense of heat that/I couldn’t bare to touch/I couldn’t bare it.” While marking a mass departure in pace and style, Coming Home also represented a more straightforward push on love, an easily digestible Perfect LP opener. And for my money, it’s probably the best vocal performance of Pundik’s career.

A cover! Already! Yes. The greatest of their From The Screen To Your Stereo library, “The Promise” (originally by When In Rome) matches “It’s Not Your Fault” in its flailing grasps at love, in its long-distance challenges. Pundik pleads “But if you’ll wait around awhile, I’ll make you fall for me/I promise, I promise you,” with eventual backing and lead work from Chris Carrabba. And although we’re already moving away from originals, this selection is all about an energy, a joyfulness not many pop-punk acts could match.

The peak of an underrated Radiosurgery, “Ready, Aim, Fire!” matches “The Promise” in pace, and pushes the dramatics. A huge hook, paired with a promise to “Set this whole town on fire” if that’s what “you wanted,” it’s taken to another level in its final go around, Chad Gilbert’s ever-welcome vocal howl an exclamation point. They’d covered John Hughes soundtrack cuts before, but never had they released an original that sounded like it belonged amongst those scenes.

My Friends Over You (from Sticks and Stones, 2002)

I feared lyrical whiplash so early, but you can’t move past track 4 without their biggest hit. When the band attempted a pseudo-sequel with “Listen To Your Friends,” there was something missing. The almost impossibly bright guitars? The vocals that sound like they’re run through a Chipmunk song generator? Maybe it’s just youthful exuberance. The pairing of the last two choruses remains a master stroke in pop song construction, the Cyrus Bolooki drum line warming my soul.

Our only selection from Catalyst (sorry, I just couldn’t do the intro), my love primarily stems from the This Disaster DVD performance, in which a maniacal Pundik opens the show in a flurry of swinging limbs. The song itself is about, well, music, and the outlets in which performance affords. It’s a topic not often broached by the slightly silly pop-punk band, but at this point, one that seemed grateful, not narcissistic. And it’s really catchy. Simply put, “These are my thoughts written down on paper.”

Anthem for the Unwanted (from Radiosurgery, 2011)

I can feel the souls of 1 million NFG fans crying out in agony as news of two Radiosurgery songs making the cut reaches them. The unrelenting percussion is a big plus for our album flow (a Perfect LP from this band has to be FAST), and just be thankful I didn’t also include “Drill It In My Brain.”

Our debut from the band’s first era 1, “Second To Last,” in lesser hands, is a wall of sound; it’s a lighthearted romp, with lightly sketched narrative themes matched in similar structure. Instead, NFG grows into their own on the self-titled, especially in structure, the slightly shortened second verse (1:40 mark) a necessity in increasing pace. And a title reveal in the final lines serves as another early-career highlight.

Coming Home‘s best, the key work is yet again a welcomed addition, overshadowing admittedly cheesy lyrical work. It retains a bit of mystery for this listener — what exactly is that panning alarm clock dipping in and out — and more importantly retains its charm. It’s pre-chorus, when those keys come back in, remains a collective crescendo for the band, years of solid pop construction coming together.

“Tell all my friends I’m dead.” We begin our lyrical descent in track 9, a deeper cut from Sticks and Stones, a track dealing as much with losing a partner as losing sense of self. Our title here isn’t played as a negative (as some break-ups deeper in this tracklisting do), but instead a necessity.

Sporting a youthful confidence that’s tough to fake, “2’s & 3’s” peaks several times over. Whether it’s a minor, transitional alteration (the kind the band specialized in) at 1:25 where Pundik carries the “And I know” into the second verse, or the “Stupid games are for stupid people” assist from Gilbert, the sophistication of the song structure should again, surprise. Nothing Gold Can Stay isn’t an embarrassing early record (if anything, ST is the embarrassing one), it remains a delight and a feat modern-day pop-punk should strive toward. 2

We got the start of a nice pattern here, jumping from Nothing Gold to Not Without for four straight. We’ve shifted far from the notion of love, encountering a track that declares our subject’s past partner was “living so far away from the truth/That you’re believing in your own lies.” The relationship, in past tense, is paired with a present tense exclamation of the title, aided again by Gilbert. The (what I think is a) phaser often accompanying this record’s guitars (it’s replicated in a future Not Without A Fight contribution) reminds me of producer Mark Hoppus’ work in +44 and was welcomed by fans following Coming Home‘s more minimalistic presentation.

While percussion here is definitely dated, the hook, its guitar falling in and out, holds up. And in 2017, I think we can all relate to, concur with the line, “I woke up today feeling older.” Pundik exclaims, “My name is a disappointment, I only disappoint myself,” setting the stage for the sort of existential crises the band’s most interesting work would play in. Another track that fits in just fine with more modern entries, and one that, again, shows off how youthful exuberance, when structured, can still impress.

Those repeated guitar effects from “Don’t Let Her Pull You Down” makes this a nice era pairing, while the mention of friendship, or the deluded sense of thus, pairs up nicely with “My Friends Over You.” Here, it’s a former partner “taking advice from people who claim to be your friends,” resulting in an unexpected abandonment. The band knocking advice from this particular group is almost insane given they not only based 1 single off pals, but two.

Familiar Landscapes/Heartless At Best (from Coming Home/Not Without A Fight, 2006/2009)

The nostalgic overtones of Coming Home makes for an appropriate beginning to a two-part closer, one side of their core dichotomy established. A blisteringly chirpy track, it hides a seedy underbelly, one of emptiness and again, abandonment (something that comes up over and over again in their discography). But it’s those instrumentals, the band’s ability to make just about anything pleasantly “pop” which stands out. “Heartless At Best,” meanwhile, concludes our second half downfall, a mid-tempo, inventive cut that has Pundik exclaiming quite appropriately at our finish, “Everyone will remember me/Only because of how I twist my words around.” But it’s the second half of that hook that really stands out. Amongst the heartbreak, or “Heartless” as the title identifies, the songwriting is oddly inspiring, the band advising: “If anyone gets to this point/Stop yourself from diving in headfirst/Onto solid ground.” Even with a truly punishing string of 7 to cap off this Perfect LP, a ray of light. The second side.

Have your own LP? Let us know at modernvinylnews@gmail.com.