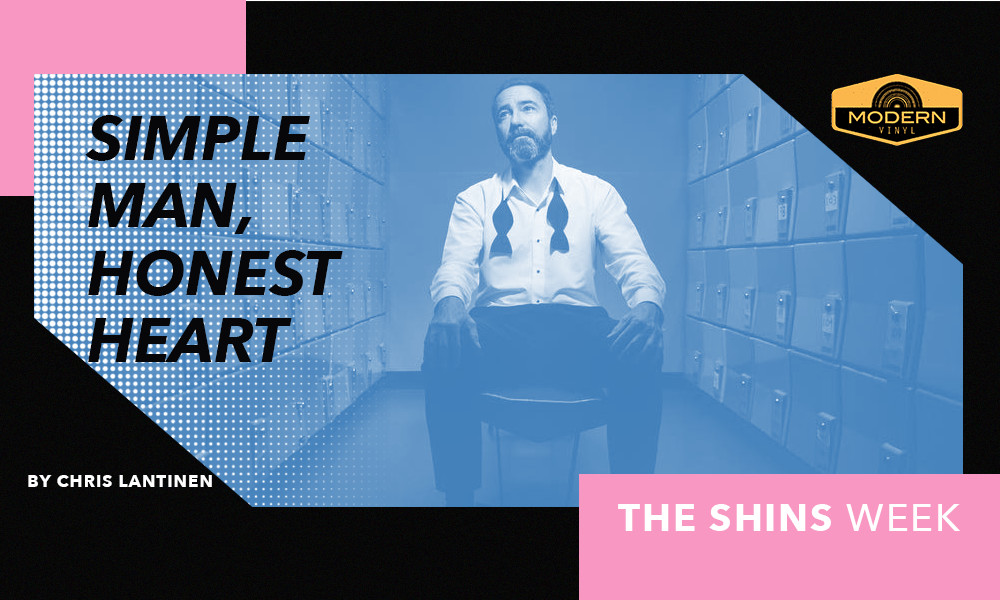 In 2007, a newly married James Mercer talked Valentine’s Day with The AV Club, presented not exactly as expert advice, but from someone who’s “had a few things to say about love and relationships over the course of three albums.” It’s a fascinating read, from the band’s on-tour Valentine’s plans (brothel, possibly a “lotion place”); to a member of My Morning Jacket fucking to Oh, Inverted World; to competing with football players over romantic interests in high school 1. Talk eventually gets to that marriage, an eloping countering catalog line, “you love a sinking stone that will never elope,” and a passion in which, “when she tells you she loves you, it just has weight to it.”

In 2012, Port of Morrow stands as Mercer’s first record as a husband, a father. There’s a track, “September,” painting the partner not as purely human, but near angelic, “born of the sea” and his “future forming,” his “curse undone.” He’s a songwriter still willing to exploit his faults — “she knows deep down there’s a little child” — and one unafraid of tumultuous topics to come — “it’s not that the darkness can’t touch our lives/I know it will in time/but she’s no ordinary valentine.” Meanwhile, a song originally recorded as part of a Zach Braff cinematic reunion and part of the upcoming LP, Heartworms, “So Now What,” matches up well with our Mercer timeline, despite any purely narrative intentions it has. He sings, “oh girl, it’s been a while/since we met out there in the cold/it’s hard not to imagine/the lives we used to have,” before referencing a time “if things would not turn out the way we planned.” Could this hyper awareness color Heartworms, or better yet, sap such color from the pastel tone cover art? “The Fear,” another released track from the LP, reads, “you look into my eyes/you don’t really recognize me anymore,” before moving into that title meaning: “this fear is a terrible drug/if I only had sense enough/to let it give way to love.” It’s writing not only of fear — fear of self’s destructive capabilities — but of nostalgia, and more specifically nostalgia we have written record of.

James Mercer’s early work on love breaks down into both personal and later, character musings, fiction eventually used to distance oneself from the designation of “whiny indie rock.” Oh, Inverted World borders on that edge, bouncing between the charming nostalgia of “Weird Divide” (a fascination on the past was no late career hitch) and the type of romantic, metaphorical declarations making even Dashboard blush (“Girl Inform Me”). In the former, Mercer recalls a daily stroll, a memory “swollen up with age.” The latter — beyond the gaudy, lips-to-a-mountain-range-on-fire comparison — contains those same insecurities of current work, Mercer dealing with touchy senses, ones that have him worrying: “your clever eyes could easily disguise/some backwards purpose.” Meanwhile, “Girl On The Wing” has Mercer recalling “the sunshine as you were melting,” his faults clear in the midst of destruction. And “The Past and Pending” remains one of our standout breakup anthems of the 2000s, a foreign candle, or passion, leading a couple to turn every stone and yet find no recourse. “The lives we used to have.”

Chutes Too Narrow may be the band’s most romantically dominated collection, and most manic, tracks like “Kissing The Lipless,” “Pink Bullets” and “Gone For Good” essential to the story. “Pink” looks back once again, two outsiders connecting, the type of girl Mercer thanked god for in that AV Club interview. He writes, “oh, what a contrast you were/to the brutes in the halls/my timid young fingers held/a decent animal,” a love eventually splitting within the same cut. “Gone” is perhaps, emotionally, the lowest of Mercer’s writings, whether character or personal (searching for if he actually split off an engagement leaves me with nothing), the “fatal flaw” of love being brought on by someone he felt “liked me because of the band.” More so, this thinking relates to the selfishness of love, a concept he calls “inherently unfair” because of its implications and connections with lust. That lust is explored further in tracks like “Turn A Square” and “Those To Come,” the former’s “glimpse of an ankle” sending Mercer into a tizzy, the latter’s “modern girl” making tea in her underwear.

By the time Wincing The Night Away rolls around, we have a Mercer deep in relationship, instead highlighting character work, and in extension, minor social commentary in lead single “Phantom Limb.” A tale of a “young lesbian couple,” the track is both love letter to those outsiders Mercer himself joined ranks with, and one of escapism, both from town and belief. They’re “too far along” in their crimes against the church to bother memorizing the hymns, while absorbing rolling eyes in the meantime. It’s a key songwriting turn, a well-promoted dip into worthy fiction, right when the band risked self parody; a third straight “break-up” record may have been a bit overwhelming, especially from someone who by all considerations (he’d marry right around this time) was content or better. Yet excising such a past crutch — no matter your feelings on distraught Mercer, romantic adoration and eventually disaster was relied upon — would not be finalized over one single. “Turn On Me” imagined a partner who masked disdain, and who always “had to hold the reigns.” It’s yet another doomed-to-fail affair in which Mercer would be the one hurt: “Because you had to know that I was fond of you.” Meanwhile, “Girl Sailor” has the singer encountering a strong-willed partner, but one who’s loss has “conquered” them. He sings, “you’ve made it through the direst of straits alright/can you help it if plain love now seems less interesting?,” the idea of settling down even less exciting than it initially sounds.

Coming back around on Port Of Morrow, one must ask the question: do we need the disaster? Does he need to render the adoration bittersweet, like in the old days? In “Simple Song,” he rides much of the same “September” waves, portraying wife as savior, his life “an upturned boat/marooned on a cliff,” while she brings a “great big flood” and gives “a lift.” It’s possibly the most unironic, purely sweet song of the band’s career, Mercer singing in the bridge, “I know that things can really get rough when you go it alone” — again making it a pair with “September” and its chilly trip to the past — before he finishes with, “could be there’s nothing else in our lives, so critical/as this little home.” 2

Do some deride Port Of Morrow for its lack of soul crushers? Do some equate sweetness with loss of edge, happiness with loss of material? Probably. It’s kinda what we do with most musicians who reflect life improvements within their work. But free of misery, character work like “Phantom Limb” takes him beyond male, run-down journaling, while the marital exploration and pushback against traditional and culturally-encouraged romantic erosion in Port Of Morrow is vastly more interesting and well, adult. At 31 when Oh, Inverted World came out, Mercer can finally poetize his age, no longer facing fans who anticipate heartbreak. After all, they’re probably in the same age bracket, or at least late 20s to early 30s. 3

Can Mercer, and by extension, The Shins, completely ditch the woe-is-me standing that initially led to the entity’s rising? Let’s hope so. If not allowed for continued and natural progression, we’ll have a 50-year-old man still singing about kissing on football fields and not, as he explains in new song “Name For You,” the empowerment he hopes for his young daughters: “My girl if you’re lucky one day/rolling down the ancient high street you’ll find/in the mirror reflects a woman in her prime.”

Shins Week is in honor of the band’s upcoming full length album, “Heartworms.” You can grab it on vinyl, here.