‘Pink Bullets’ and Shooting a Breakup 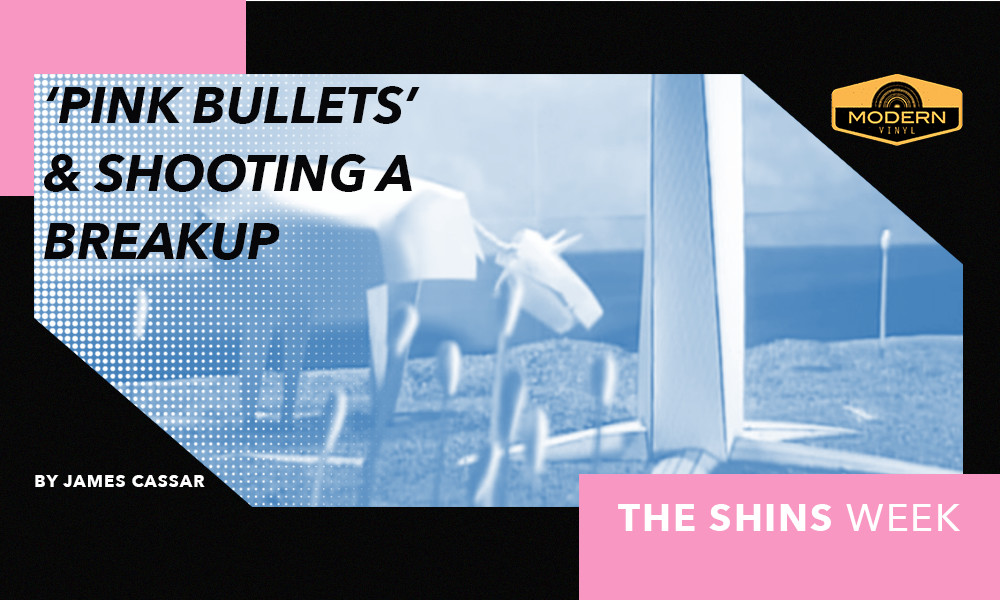 The Shins recorded their 2003 album, Chutes Too Narrow, in the basement of vocalist/guitarist James Mercer’s former home. Unceremoniously nestled in a troubled section of Portland, the worst had been confirmed when the computer holding the record’s master files was stolen from that makeshift studio. Mercer would joke to Rolling Stone about the robbery, quipping that the near-finished Chutes was now in “some crack addict’s basement.” While the band didn’t need to start from scratch after this hiccup, a similar moment of vulnerability, of fear exists on the album’s back half. That moment exists as “Pink Bullets,” an acoustic-electric ballad that, like any Shins song worth its salt, is a breakup song.

Just look at the video. (Don’t worry — it’s been provided below this paragraph.) Directed by Adam Bizanski, it features paper animals living on a photorealistic farm, its grass obstructed by windmills and a fence. The stars of the show, a family of cows, have downcast eyes, their somber mood not lifted as one of them — in pure 2003 bliss — recites a chunk of Mercer’s poetry. (Two cows, presumably parent and child, watch the sun set from behind that inconvenient fence, fighting back paper tears.)

Even without these visual aids, “Pink Bullets” carries a similar weight. The intermingling of Mercer and Dave Hernandez’s guitars seem to float, their weightlessness boosted by intermittent acoustic strums and a consistent electric swirl. The scene we’re greeted with is a pastoral one: a narrator discovers a decent animal amid some foreign flowers, in a temperate, wet field. (The landscape is underscored, however sarcastically, by an accent of harmonica.) But as the song unfolds, past the first mention of the track’s second chorus, Mercer mentions “warm light, on a winter’s day” after “a thousand summers passed.” These two disparate seasons are bookended by a recast version of the national anthem — where “over the ramparts” this narrator’s lover tossed an all-season remedy: the scent of their skin. This sly nod to “The Star-Spangled Banner” secures both this lover’s mystical, timeless appeal and her ability to break down one’s interpersonal walls as swiftly as a rocket’s red glare. While never explicitly mentioned by the track, the song itself makes reference to “pink bullets throughout,” soft blows to romantic defensiveness, interconnected timelines, and a sense of self. This first deceit, courtesy of Mercer’s best Francis Scott Key impression, is one of those pink bullets.

The second pink bullet concerns an image repeated twice on the track: two loose kites broken at their knots. In their first appearance, those kite lines crossed — perhaps in the same cool spring scene these lovers met — and their knots were tied. But as quickly as they were connected, Mercer’s next line cuts the ties. In their second appearance, time has passed, and these kites float in opposite directions, their flight patterns “drawn to the ground.” This is how the song ends a handful of seconds later; the compression of a romantic timeline from courtship, to commitment, to closure might seem abrupt, but to shorten it is to amplify this breakup’s abrupt blow to one’s confidence. Mercer’s crushed narrator makes reference to this temporal trick with the line: “the years have seemed short, but the days go slowly by.”

The most perplexing aspect of this scene is that this couple cut their knots to “finally fly apart.” After a song built on grandiose metaphors tying this lover to revolutionary notions of a country’s proportions, this tiny, but important modifier seems to invalidate the pedestal built in the stanzas before it. That’s because the third pink bullet — fired before Mercer’s bridge rationalizes the whole breakup prior to an extended harmonica solo — re-evaluates the whole coupling from The Shins’ favorite venue: media outside music.

Sure, Chutes Too Narrow was released before Garden State, but Oh, Inverted World gained traction (and notoriety) for having a single score a McDonald’s TV spot before the Zach Braff film. (This Golden Arches sync opportunity caused an op-ed to be printed in Portland, damning Mercer and Co. to “corporate suck-ass” status.) Mercer’s lyric sheets often feel inspired by secondary sources: “The Star-Spangled Banner,” for one, and the doe-eyed idealism of romantic poetry for another. That being said, The Shins were comfortable with their mixed media diet, enough to reference it in this solemn, sparse song.

This departed relationship has become something unintelligible, like “a book you read in reverse/so you understand less as the pages turn.” This is another clever reference to the song’s irregular use of narrative time, but also an act of review: Mercer’s narrator attempts to find hidden meaning a different way, an option that leaves him with more questions than answers. In its second reconfiguration, the relationship’s highs and lows belong to “a movie so crass, and awkwardly cast/that even I could be the star.” 2003 self-awareness aside — who honestly could deny an awkward and crass lead at this time in American cinema? — the flaws in the coupling are made more apparent for the first time. And while this narrator resorts to “murder” in order to erase his former lover from memory, just three lines before, he had reached the closure he so desperately needed to discover. His unwillingness to realize that this is the real third pink bullet — to be stuck in his own metaphors — is to fail to recognize his and his partner’s own imperfectness.

Shins Week is in honor of the band’s newly released full length album, “Heartworms.” You can grab it on vinyl, here.