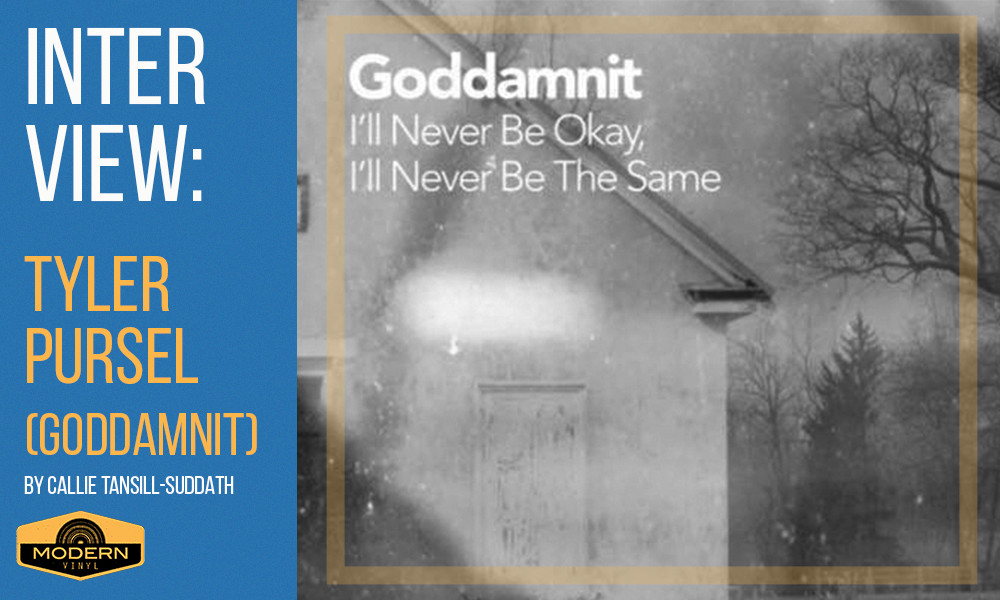 The members of Goddamnit are anything but newcomers, something profoundly clear through the complexity of sophomore album, I’ll Never Be Okay, I’ll Never Be the Same. Their familiar, yet original guitar-driven sound — with notes of ’90s post-hardcore sprinkled throughout — serves as a clear picture of a craft they’ve come close to mastering. Singer Arik Victor’s outwardly rough vocals complement the lyrical acumen on tracks like “Steady Diet of Sugar” and “Stay the Same.” The album closes with “The Message,” a track that’s unlike their previous work, but is perhaps a nod to what Goddamnit will tackle in future endeavors.

We spoke by phone with guitarist Tyler Pursel about the album’s sound, the Philadelphia punk scene, and the band’s plans for future releases.

Modern Vinyl: After listening to the new album in its entirety a few times, there’s a pretty clear overarching theme here. Would you consider it a concept album, and if so, what were you going for?

Tyler Pursel: It’s kind of weird. Like a lot of the samples and stuff we did afterwards are kind of a result of, I guess, listening to all the songs and realizing there was a central theme — which we didn’t necessarily set out to do or like intend on doing while creating the record. I would say it was about 50 percent intentional and 50 percent it just kind of happened that way.

MV: Were the samples cohesive? As in, were they from the same recording?

TP: Yeah, it was a batch of stuff we just had somebody read off and then we just put together ourselves in little fragments depending on what suited the song and where we wanted to have specific things that tied together.

TP: It was cool! Basically, one of the advantages of our band is that Eric, the singer, and I both own and operate recording studios for a living. So basically anytime we make a record for our band we never feel the financial pressure a lot of bands feel. So our last record we challenged ourselves to do in just a week. We did it in a week, we finished it, and we definitely thought there were things wrong with it. So this time we stretched it out. We made the record over — I think around two months — really, really, broken out. We’d do the drums, then take time off and mix the drums a little bit. Then we’d do guitar. We did the whole thing between our two studios, which is nice. We did the tracking at his studio and the mixing and everything at my studio. It was a pretty relaxed process and by the time we got to the stage of making the record, it was already pretty awesome where for the other record we had to do a lot more work. The advantage of not having to spend a ton of money in an expensive studio and just have time to sort of experiment with things was really beneficial. We’re pretty lucky in that respect I guess.

MV: I can imagine! What are the names of the studios you own?

MV: And these are both in Philly?

TP: Mine is in Montclair, Pennsylvania and his is in Philadelphia.

MV: Since all of you are veterans of the Philadelphia punk scene, how do you think your experience has contributed to how you make music together as a singular unit?

TP: It’s very interesting to read, journalism-wise about Philly’s supposedly vibrant punk scene. True, there is a lot; like any day of the week there’s a lot of shows and we’ve had a lot of bands break into the national spectrum sort of thing. As for us, we’re kind of on our own. We’re pretty DIY in that respect. We record our own stuff, our singer owns a record store, so we put on a lot of shows. So, I think the greater journalistic point of view on how the Philly scene is like this big sort of thing and there’s all the punk bands and everyone is friends or whatever; really it’s splintered little sects of different people. We have like 12 bands we’re friends with and we always play with and there is some crossover, but we kind of keep to ourselves a bit, which probably isn’t a great idea (laughs). We’re working on that.

MV: It’s interesting to hear that since so many people consider Philly to be the best place for DIY and punk nowadays.

TP: Yeah, I think people think it’s how Seattle was in the ’90s with like grunge and stuff like that. It’s sort of being framed to be like that. And it is cool; I’m not ragging on it or anything, but I definitely think there’s bands who get together and are like, “as soon as we get to Philly everything will be awesome,” but actually all the bands are coming here now.

MV: I want to touch on the composition of the album for a minute. For most of the record there was a similar sound, but the last song is just completely different. What impression do you hope that leaves on listeners?

TP: Actually, that song was basically like a demo for what was going to be a really grand, ridiculous song with the full band. But, when we made that, it was all recorded live in a way? We had this shitty Casio keyboard and we were supposed to record it on one microphone. We just put a microphone in the middle of the room and Eric and I played guitar. It was just to kind of get it out. And then I had him sing it and I like the idea that it was incredibly lo-fi. And it didn’t end up being a song that we would do live that much. We tuned the guitar in a really weird way and I was just like, “We should just put it on here as is, kind of like fucked up and lo-fi and fucked up.” I like that it kind of throws people off in a way. Conceptually and weirdly, I think it really fits with the record, but just sonically it’s kinda different and that’s something we’re definitely looking to get more into as we make another record – still being like a part of the punk sort of thing, but distancing ourselves sonically a little bit. I think it’s the beginning of that.

MV: One last thing: I have to ask about the name of the band.

TP: It’s a double-edged sword band name. Everyone thinks it’s some tribute to Alkaline Trio, which I fucking hate. For all of us, it literally has nothing to do with that. Right before the band formed we were tossing around names and kept coming up with these sort of long, ridiculous sounding, post-hardcore band names and we didn’t feel that really fit anything. There was no memorability to that and we sort of settled on that. I feel like it was a bit of a joke at first, but then it hung around. It’s easy, it’s memorable, it’s semi-offensive, it hits all the categories you care about for a band name. I don’t know if it necessarily fits exactly what we do musically, and I think it could be a little weird in that sense. You know, I felt the same way about band names like Brand New and Title Fight and shit like that. They sound like they would be shitty pop punk or crappy hardcore bands, and really they’re like a lot more than that. I kind of like that layer of it too.

Grab the new album on vinyl over at Jump Start Records. The limited version includes randomly mixed vinyl and a custom hot sauce made by the band. It was originally released in March of this year.