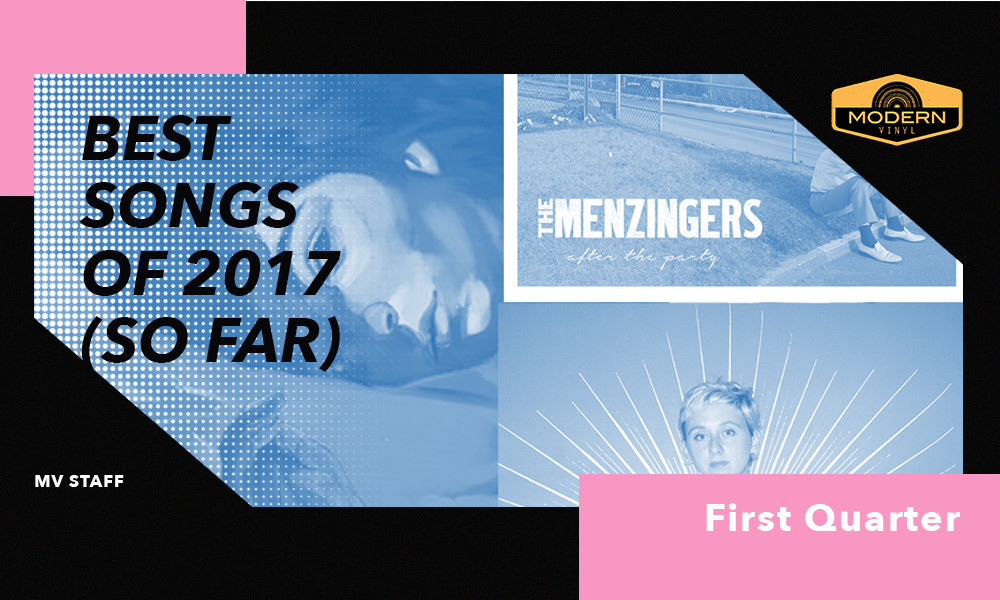 The ever-expanding group of MV staffers (seriously, we’ve added 6 since the start of 2016, more arriving) recently got together for a 1st quarter retrospective, each listed contributing 3 songs to our playlist. The detailed takes below would be each writer’s favorite track of the year, thus far. Take a listen and get to know a few of our newest voices in the process.

A song of two distinct halves, “Broad Daylight” begins in a capella, Crutchfield laying out a bittersweet purpose statement: “Our love is unquestionable/Out live is here to die.” And die it does across this album opener, Cyndi Lauper-like vocal tones wailing out across superb synth. A now-past partner encourages our singer to “go out and kill some memories,” a result of “bound” to happen heartbreak. It’s a song of crushing second guessing, of ferocious frustration, of killed nostalgia.
“Was it the great moonlight that night in July?
Just remembering the heat’s enough to make me cry”

Alt-country in composition and wryly sentimental by design, “Bobby” is the latest sonic adventure from this Philly DIY icon. Some may view this as a departure from the lo-fi sparkle of 2015’s Beach Music, or the halcyon passivity of 2014’s DSU, but with a discography as dense, varied, and counterintuitive as Sandy’s, 2017’s Rocket is merely an extension of an already stuffed toolbox: gleaming and tantalizing.

Andrew McMahon makes a true return to form with “Love and Great Buildings” on his sophomore release as Andrew McMahon In The Wilderness. Fans of McMahon’s sunny piano pop songs will enjoy this one, even if they don’t enjoy the fact that it’s surrounded by experimental dance-pop tracks. Zombies on Broadway was deemed the “New York City album,” where Andrew recorded the record, with LAGB reflecting that New York sound. It’s got all the hustle and bustle of being in a big city…without ever stepping foot in one. The chorus is one giant metaphor relating relationships to buildings, because all things over time tend to crumble and need that solid foundation to rebuild upon. He sings, “Love and great buildings will survive/Strong hearts and concrete stay alive/Through the great depressions yeah, the best things are designed to stand the test of time.”

Originally released in 2016 as an early first single from After the Party, “Lookers” was already the best Menzingers song ever. Hearing it in context, though, makes it hit that much harder. After the Party is an album about two things: falling in love and getting older. On “Lookers,” the narrator looks back on the youthful spark of the old days, when he and the girl he loves “were both lookers.” They aren’t anymore, and life isn’t as simple as it used to be, either. By the end of the record, the hero will get the girl. (“After the party, it’s me and you,” frontman Greg Barnett sings on the title track). But here, he’s still looking back at old pictures of the one who got away, his heart aching a little more with every year that passes. Like the song, that heartache is exquisite — the pain from an old wound that none of us can stop carrying.

“Alt-country” is a term being thrown around a lot lately. It’s used to describe a sound less harsh than most music that falls under the blanket “alternative” label, while less twangy than you’d find on CMT, but with clear nods to each genre. “Bobby,” Alex G’s first single from forthcoming album Rocket, serves as a strong example. Shedding his typical lo-fi style, the Philadelphia-based artist paints a wistful and reflective picture of past relationships. Emily Yacina’s gentle and breathy backup vocals complement the earnest yearning in G’s to create a sound markedly different than any of the artist’s past releases. If “Bobby,” sets a precedent for what we can expect from the artist’s newest album, it may certainly be his strongest.

Gainesville trio UV-TV manages to sound cold and warm all at once. Manchester post-punk is the key sound from which they draw, but there’s enough pop to tie them to the city from which they hail. The way in which Ian Bernacett and Rose Vastola trade off vocals on this track lets the band’s sound alternate between dreamy and grounded. “Take It All” takes the contrast even further with crisp rhythms under fuzzed-out guitar, ultimately resulting in cross-genre bliss.

Elbow might not be a household name in the U.S., but their lack of success in the states only helps to propel them ever higher in the UK. Their seventh album, Little Fictions, was released this February, and while it has a more somber tone than their previous release (Lost Worker Bee EP) it doesn’t lack any of the lyrical punch singer Guy Garvey is well known for. “All Disco” is one of the strongest songs on the album, inspired by an interview Garvey conducted with Pixies frontman Frank Black. When asked about how he has jumped in and out of so many different genres, Black’s response was: “you have punk rock, you have rock, you have blues, you have soul, it’s all disco.” Words that make for a fantastic song title and even better life lesson.

David Fisch (Features, Video)
Sampha — (No One Knows Me) Like The Piano

2017 finally saw the release of Sampha’s first full-length LP, a years-in-the-making work that’s exactly the meditative electronic/R&B record listeners have been waiting for since he first appeared on tracks with SBTRKT and Jessie Ware. He makes the argument he’s equally as impressive as his contemporaries with the record, and really with just one singular track from it. “(No One Knows Me) Like The Piano” is Sampha at his most stripped down, leaving the beats behind for a nuanced love poem that examines an artist and his instrument. It’s a very specific kind of love that most might not be able to identify with, but Sampha’s croon holds weight to the history behind such an intimate and passionate relationship, which is something everyone has experienced at one point or another. It touches the soul in a simple and bold way.

The perfect amount of poppy, angsty, and 90s, this song is everything we’ve been waiting for. Synth, unplugged guitar, and shredding electric guitar come together to make an unbelievably catchy track that’s bound to get stuck in your head after a single listen. Vocalist Sam Kless sings apathetically, sounding more defeated than anything, telling the mysterious “you” of his new tattoo, that he just wants to show ya. Then the song casually rips a killer guitar solo. What’s not to love?

Delaney also submitted this track, not available on Spotify.

“Dangerous,” the first track on The xx’s new album, opens with an almost addictive fanfare of brass horns. It’s a slice of pure summer that could shine through the darkest of winter nights. Jamie xx, the band’s producer and programmer, adds some of his trademark beats into the mix before the looped horns return once more. But this isn’t one way traffic. The upbeat sound of the track is juxtaposed perfectly by its lyrics about a potentially unwise emotional connection. “They say you are dangerous, but I don’t care/I’m going to pretend that I’m not scared,” sings Romy Madly Croft and Oliver Sim as one on the chorus. It’s a bold and rich pop song for the introspective millennial generation.

“Trigger” was a single originally released on Oct. 14, 2016, as part of the preview to Deaf Havana’s album, All These Countless Nights, which dropped in late January. The lyrics of the inevitable ending of a relationship, coupled with catchy melodies, though formulated, and frontman James Veck-Gilodi’s convincing vocals on the subject made this song one of the top spins in my Spotify playlist. I still have the phrase, “I held the gun but you pulled the trigger and we watched if all go,” stuck in my mind after 3 months.

While the world was still reeling from Lorde’s new single and the announcement of her new album, Melodrama, out June 16th, she quietly released “Liability” in March. It’s much simpler than “Green Light,” with just Lorde’s voice calmly dancing over a piano ballad. It’s hauntingly real and identifiable to anyone who has ever felt like a burden to people in their lives, while taking it out on themselves. The words “get you wild/ make you leave” perfectly sum up the much-too-short song, that grips and holds you for 2 minutes and 53 seconds, before leaving you with nothing.

“Footscray Station,” officially released this year as a B-side to a split 7” with Cayetana, is one of the two new tracks recorded since the band’s seminal self titled LP released last year. The Melbourne trio, fronted by the amazingly talented Georgia Maq, once again has created a beautiful and emotive ballad that resonates deep in my soul. There is something in Maq’s vocal delivery that makes me feel and empathize with every word she sings, and she has only improved on that with this track.