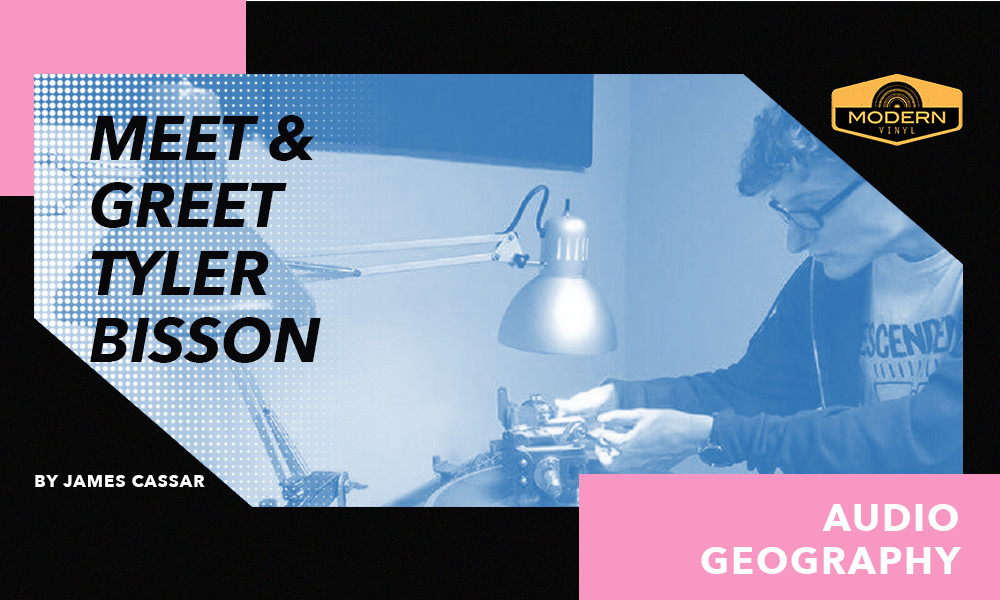 “I like to be the one-stop shop. My favorite part is when someone uses me as part of their creative process.” Late in my conversation with Tyler Bisson, the Tallahassee-via-Connecticut owner and operator of Audio Geography, the creative process he mentions is born at SXSW in a cramped, sweaty, and unconventional place. We’re talking in a repurposed Urban Outfitters dressing room, shortly after the other two co-hosts of The Modern Vinyl Podcast and I recorded a rapid-fire episode straight to lathe-cut vinyl in the same space. Bisson, alongside his business partner and fiancée Chelsea, brought countless musical visions to life in real time: a tradition that began at local Connecticut shops for several Record Store Day celebrations and continued down to Texas in partnership with Crosley in 2016.

The process Bisson demonstrated was dizzying and methodical, a combination of using a T560 vinyl cutting machine, which cuts stereo grooves into plastic, and Crosley’s C10, the manufacturer’s high-end turntable. His Audio Geography Studios — which also provides hand-dubbed cassette tapes — prides itself on reframing how consumers view these one-of-a-kind, handmade items. “Most lathe cuts people have heard are mono and embossed on the 1940s-era machines instead of wicking away at the material, which creates an approximation of the groove,” Bisson explains.

Near the end of his college career at UMass Lowell, Tyler interned for Dietrich Schoenemann of Complete Mastering (USA) in Bethel, Connecticut, who was interested in learning how to use a lathe to create vinyl records, in addition to his business cutting lacquers for traditional vinyl production. Schoenemann passed the task off to Bisson, who was working at a grocery store in tandem with the apprenticeship. “It was during a time when major studios were folding. After three months, I was like, ‘this is my business now!’” After graduating in 2012, Tyler brought samples of his freshly-minted work on tour — a selection is available in the Spotify playlist below — and began commissioning work for everyone from New Jersey punk band Aspiga with a Christmas release to an emergency release for The Hotelier ahead of last year’s Goodness. “This quality music deserves a home. I’ve done commercials before for promos and stuff, but it feels like the antithesis of why I exist: so bands can have less than 100 records.”

What’s even more indicative of Audio Geography’s mission is the loose linkage between his own personal experiences in DIY projects and building the basis for several others. Bisson was a member of Connecticut’s Dear Pines, a band that released their debut and final LP, Skipping, the day their breakup was announced. With members that Tyler knew “since we were eight years old listening to the Goo Goo Dolls together,” he remembers his tenure as something that had “never been so easy.” That ease continues into his own solo work as TRAGWAG — short for That Really Awesome Guy With A Guitar — which will be releasing a 2-CD compendium later this year.

When I quizzed him about his relationship to DIY culture, especially since the wholes of Connecticut and Florida are hotbeds for homebrewed artistic pursuits, he draws a line between ethics and intent. “There is a big different between being a DIY band and staying a DIY band.” That being said, his release history straddles that line with a smile, creating handmade gifts for friends in bands and even a gift intended for Pearl Jam frontman Eddie Vedder. “A client had a brother that passed away that had interviewed Eddie on college radio right before Ten was released. Over time, he began to bring up the story of this interview before songs at shows as some sort of life lesson. I pressed the interview on one side of the record, and sound clips of him telling this brother’s story on stage.”

Due to Bisson’s client relationships being from different sides of the music industry’s looming infrastructure, it’s important for him to remember his roots as an avid collector of Fat Wreck Chords 7”s and a young punk. “I’ve been playing in bands since I was 12, so I was around. It’s like a very organic thing for me. I’ve never thought about advertising. Most people get a record with my card in it and then look me up — it certifies whatever they’re holding is ‘a handmade, one-of-a-kind copy of a record.’ I think of myself as someone with the means to pursue it as a job.” Whether outsiders view Bisson’s work ethic and persistent media diet as the work of a passionate hobbyist doesn’t matter, because Audio Geography’s course is charted in the connections made across state lines, scenes, and music formats, with each groove holding its own weight.