Pressing Story: Why Building a Full U2 Vinyl Collection Is (Almost) Impossible 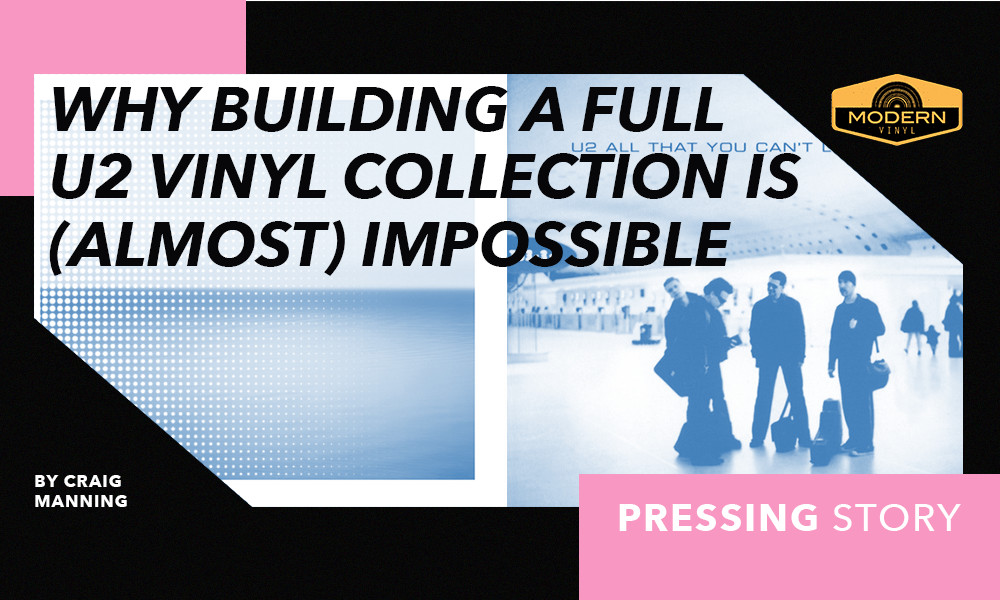 Ask someone to list the biggest bands in the world and there’s a good chance U2 will be one of the first three or four names to get dropped. People love to rag on this band, from the Apple Songs of Innocence stunt to Bono’s humanitarian status, but they’re still one of the biggest live music draws in the world and a band guaranteed to make some sort of splash anytime they release a record. This summer, the band is sure to be back in music industry headlines for the big 30th anniversary tour of The Joshua Tree. To top it all off, the band’s upcoming album — supposedly called Songs of Experience — will likely arrive before the year is out. 40 years into their career, U2 is clearly sticking around.

You wouldn’t know that from browsing the “U” section at a record store, though. While every album in the U2 discography has been pressed on vinyl at some point, many of their records are difficult or downright impossible to find. About half the catalog is readily available: you can buy Boy, October, War, The Joshua Tree, The Unforgettable Fire, Rattle and Hum, and the aforementioned Songs of Innocence new on Amazon for relatively reasonable prices. Aside from Songs of Innocence, which came out in 2014, all those records were reissued in 2007 or 2008, as was the live EP Under a Blood Red Sky.

If you maintain the view that U2 started to suck after the 1980s, that list of records will probably suit you just fine. If you’d like to own the band’s adventurous 1990s work, though, or their return-to-form records from the 2000s, be prepared to dig into your pockets. At least for now.

The Questionable Logic of U2 Vinyl Reissues

Part of the problem is that U2’s reissue strategies don’t make a lick of sense. You can find the double LP reissue of the The Joshua Tree (released in 2007 for the album’s 20th anniversary) at just about any store that sells records. Of course, you can also pick up the original single LP pressing of The Joshua Tree for mere pennies. (When I started collecting records, I bought a U2 vinyl lot that included The Joshua Tree, The Unforgettable Fire, Under a Blood Red Sky, and Wide Awake in America for $16.) A similar thread runs through the band’s catalog, where the records to get recent reissues (War, The Unforgettable Fire, etc.) are the ones that remain easy to find in older, cheaper incarnations.

Meanwhile, the only record in the discography that fans hold in similar esteem to The Joshua Tree — 1991’s Achtung Baby — largely remains a white whale. Genuine copies of Achtung tend to sell in the hundreds on eBay, and if you find one for $20 or $30, chances are it’s a bootleg. (Luckily, most of the bootlegs are easily identifiable because they’re colored vinyl pressings. The album has only been officially pressed on black.) Achtung Baby, like U2’s other “classic era” records, did actually get a vinyl reissue not too long ago for the 20th anniversary of its release in 2011. Unfortunately, that repress was only available as a boxset, which included two vinyl discs worth of remixes. Good luck finding the set for under $100.

Still, Achtung Baby is easy to find compared to most of the records that came after it. 1993’s Zooropa — essentially a weirder, more experimental version of Achtung Baby — hasn’t been officially pressed since its original release. The same is true for 1997’s Pop, 2000’s All That You Can’t Leave Behind, and 2004’s How to Dismantle an Atomic Bomb. According to Discogs listings, the latter two records were only ever released on vinyl in Europe. All these albums tend to go for prices in the $200 range when they do pop up on eBay — an event which is rare in and of itself. Shopping for them is complicated further by the fact that all of them have been bootlegged, sometimes liberally.

Even 2009’s No Line on the Horizon, an album less than a decade in the rearview, is hard to find. At the time of this writing, the lowest priced copy on Discogs came in at $70, while a seller on eBay was asking $109.99 for a sealed, mint condition copy.

From the looks of it, U2 could be poised to rectify the woeful representation of their more recent work. Just days after I began writing this piece, a pre-order option popped up on Amazon for a vinyl import reissue of How to Dismantle an Atomic Bomb. Now officially out, the reissue is currently going for $23.74 — not bad considering the original official pressing can often go for nine or 10 times that. But since the reissue is legitimate (through Interscope), it begs the question of why the band isn’t just going back and doing a whole series of reissues, as they did back in 2008 for their pre-1990s work. Surely anyone who’s been clamoring for a Dismantle reissue would be just as happy to pay for a repress of All That You Can’t Leave Behind — a record that is generally viewed more fondly by fans and critics alike.

Plus, even with How to Dismantle back on vinyl for the first time in over a decade, that reissue isn’t even the vinyl release that U2 is pushing at the moment. Instead, the band is promoting yet another reissue of The Joshua Tree — this one a 7xLP 30th anniversary set that will run fans $170. It’s a nice-looking set, with a cool gold-embossed box and several discs full of outtakes and rarities (not to mention a Madison Square Garden live show) that have never before been pressed on wax. The thing is, if you want to own The Joshua Tree on vinyl, you probably already have it. The same cannot be said for Achtung Baby, Pop, All That You Can’t Leave Behind, or any album that U2 put out in the 90s or 2000s.

Especially considering the band, this slow, irregular vinyl reissue strategy is, again, bizarre. U2 are a band obsessed with keeping music alive as a commodity that people pay for. Bono has been quoted saying stuff like “Music has become tap water, a utility, where for me it’s a sacred thing, so I’m a little offended.” Even when the band gave away Songs of Innocence to 500 million people via iTunes, Apple reportedly paid for it — handing the band a $100 million check. In 2014, U2 was also supposedly collaborating with Apple on a brand new high-fidelity digital music format — a format Bono hoped would get consumers excited about buying music again. What better way to get fans excited about buying your music again than to release high-quality vinyl reissues of your beloved albums?

Classic records continue to be a source of revenue for the vinyl industry, too. According to Consequence of Sound, 2016’s top vinyl sellers list included The Beatles’ Abbey Road, Fleetwood Mac’s Rumours, Led Zeppelin IV, and Nirvana’s Nevermind. I’m not suggesting U2 has a 100% fanbase overlap with any of those artists, but there is certainly cash to be made by putting a widely heralded classic like Achtung Baby back on the market. There’s a reason artists like Bruce Springsteen and Tom Petty have been reissuing their albums as of late — even if Bruce, like U2, has yet to get around to releasing his truly difficult-to-find albums (2000s gems like The Rising and Devil’s & Dust).

To top it all off, U2’s members are even self-confessed fans of the vinyl format. “I still have my vinyl collection, but I use digital files 90 percent of the time,” The Edge told Rolling Stone earlier this year. “But I would never give up my vinyl. And so there’s a need for both, and I find that kind of reassuring that…there’s still this deep, emotional connection that people have with the body of work that is an album.” The Edge gets it. He understands that his band’s biggest fans still want to feel that “deep, emotional connection” to albums. But if he understands that, and if U2 are still one of the biggest bands in the world, then why are half their records out of print and impossible to find on vinyl unless you’re willing to spend a small fortune?