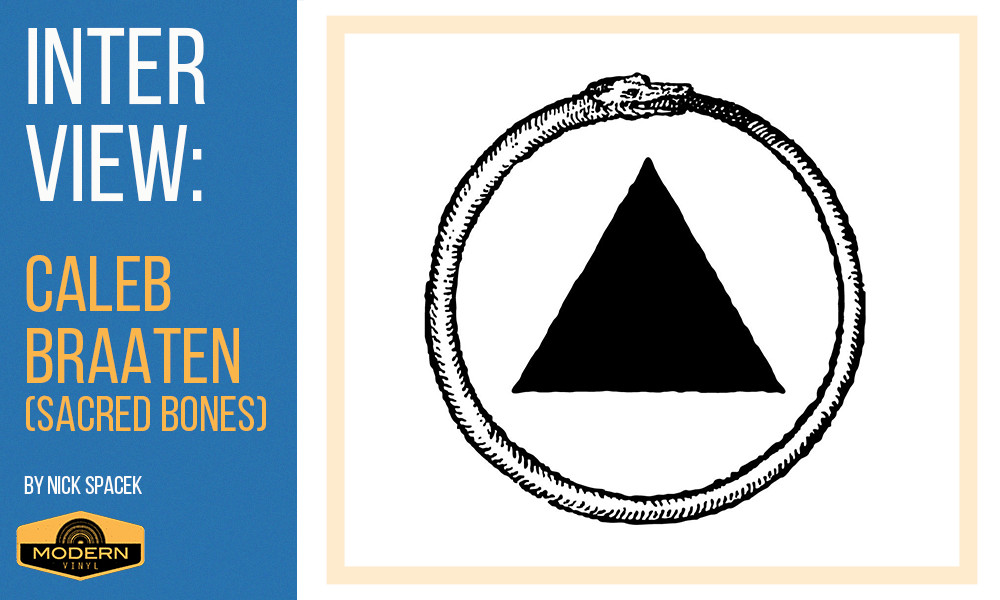 In the 10 years since Brooklyn label Sacred Bones Records was founded, it’s gone from a tiny operation based out of the basement of Academy Records to an internationally-renowned purveyor of unique sounds. In addition to avant-garde takes on garage rock from the likes of The Men, the ethereal dark pop of Zola Jesus, and angular electronica from Blanck Mass, Sacred Bones has attracted the likes of directors David Lynch and John Carpenter to release their original music.

It’s a fascinating story as to how the label came to celebrate a decade, and a lot has to do with Scared Bones’ founder, Caleb Braaten. Thanks to an abiding love for good music, he’s brought together a group of seemingly-disparate artists in a cadre of dark, introspective, post-punk. We were lucky enough to speak with Braaten by phone in advance of a label celebration this Saturday, May 20 at the Greenpoint Terminal Warehouse in New York City, presented by the Red Bull Music Academy Festival.

Modern Vinyl: I’ve read quite a bit about how the label formed, and the thing that has always intrigued me is the fact that you basically grew up in a record store.

Caleb Braaten: Yeah, you know — it’s kinda true. So, there’s this store [in Denver] called Twist & Shout. When I was in middle school, my best friend’s parents were the owners of that spot. So, we would go there every weekend, and try and convince them to let us borrow tapes to dub at home and stuff like that. I would spend so much time there, and then I started working there when I was in my late teens, early 20s.

MV: When — at that age — you have a friend whose parents own a record store, does that give you access to things that you might not have otherwise heard of in middle school, especially growing up pre-internet?

CB: Absolutely. So much. At that time, I was probably just really into like, heavy metal — like, Metallica was probably my favorite band, you know? So, they would be like, “Well, you like this stuff? Maybe check out John Zorn.” So, I was getting turned onto John Zorn and Naked City and I was like, “This is heavy. This is fucking cool,” but it’s also jazz, so that’s interesting. And then they’d be like, “Check out Miles Davis.” But yeah, as a kid, being able to have access to that kind of stuff pre-internet was really, really incredible.

MV: While every label has an identity it seems that those formed by people who work at record stores have one that goes beyond just the sonics of it all. Sacred Bones is noted for its album covers — you can tell one in an instant, just by looking at it.

CB: And that is 100% because of working in a record store.

MV: What are some of the labels that you took inspiration from when developing the look of Sacred Bones?

CB: The classics: Blue Note, of course; Impulse; Crass; even early 4AD; and definitely Factory Records. But, more than that, really, was classical records.

CB: Exactly. That’s where our template is really based from — like 50-cent classical records.

MV: That’s the thing, though — even your non-classical music fan knows that if they want to hear a piece of classical music, you’re in for something good if you find it on that yellow label. Even if it’s not definitive, it’s definitely a quality representation.

CB: Exactly. That’s the basis. I spent so much time behind a record counter, looking at records on the wall, and when it’s something that’s recognizable — even if you don’t know it — you’re interested. Like, “I wonder what that is? It reminds me of this.” That’s the idea of the template: to grab somebody’s attention, even if they had no idea what it was.

MV: The label started 10 years ago out of the basement of another record store.

MV: So, what was the thing that you heard that made you think you needed to release a record?

CB: The first record was this band, The Hunt. They were good friends of mine, and they played this brand of post-punk that I loved. They wanted to put out a record, and they were looking for someone to put out a 7″. I had been kind of kicking around the idea of putting together a record label with the guys I worked with at the shop. We all kind of did actually end up putting together record labels.

But, I was really gonna focus on reissues. I was going to focus on obscure post-punk and death rock reissues. Then this came along, and I was like, I can probably figure out how to make this come together and maybe sell a couple hundred of them. That’s kind of how it went [chuckles].

MV: I was a music director at a college radio station right when the label started, and as things progressed, the word that got thrown around a lot was “cinematic.” I see that as being an interesting through-line for a lot of what Sacred Bones has released. Maybe I’m stretching here, but it does seem that every album creates a very definitive picture in the listener’s head.

CB: That’s very interesting. I’ve never thought of it that way, but it definitely is the kind of music that I like: music that is a little dramatic and something you can imagine a world around.

MV: That certainly ties Sacred Bones in with that whole Factory Records aesthetic to which it’s most often compared. I mean, the label does have a certain reputation for being “dark.”

MV: Is that the sort of music to which you’re attracted, or is it a case of like begets like?

CB: Ultimately, yes, it is the sort of music which I’m attracted to. I don’t listen to one kind of thing at all. I like country music, but in country music, I like Townes Van Zandt and early Waylon Jennings, which is kind of dark music, so yes — I think it is something I’m just attracted to.

MV: On this cinematic tip, I was so excited when I first heard that John Carpenter was releasing new music and that it would be on Sacred Bones: just sort of a doubly cool kind of thing.

CB: Tell me about it. It was so amazing. It was just kind of a dream. I still feel kind of like I can’t believe it happened [laughs].

MV: What’s been great, watching the label expand, is that you can have discordant and dissonant music alongside something which is very much not so: that first Zola Jesus record on the same label as the new Blanck Mass is a pretty diverse roster.

CB: Like Pharmakon and Marissa Nadler, but it’s not that it doesn’t make sense.

MV: Oh, no: those artists all compliment each other so well, but I’m always interested in how a label avoids falling into the pitfall of every artists having the same sort of aural footprint.

CB: I feel like that would be harder to do. I feel like it would be harder to find the same thing and keep going, because I feel like specific subgenres — for the most part — get pretty boring. There are a few people who rise to the top of that, and those are the kind of people that we’re trying to work with, but I look at the label as a big mixtape. You should be able to play it all the way through: sure, it’s not the same style all of the time, but it feels like it’s part of a compilation.

MV: That ties into what I was wanting to talk about next, which is the fact that Sacred Bones releases music by artists who evolve. Is hearing new recordings by artists who are continually changing one of those fun challenges of running a label?

CB: It is very exciting. I love that. It’s what people want — or think they want. Sometimes they don’t, but that’s what I want to hear out of an artist. I want to hear something new. Not necessarily completely different, but a different take or an evolution.

All my favorite artists, when you look back on their catalog — besides maybe the Ramones — all their records are different. Sometimes the early ones are the better ones, and they kind of fall off, but sometimes they grow, and the later ones are the best, but there’s growth and change, and that’s so, so crucial to art.