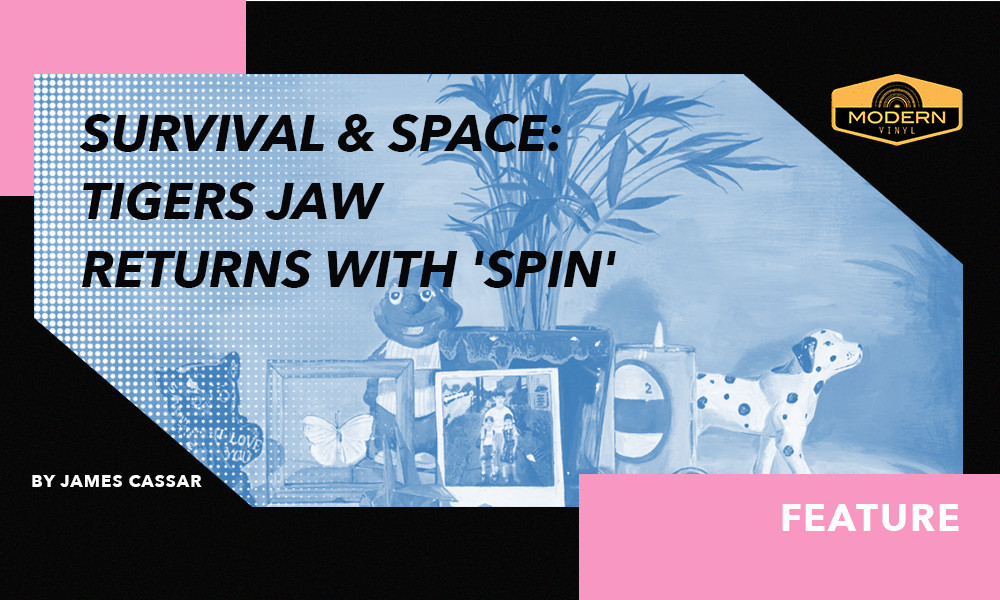 Tigers Jaw’s fifth full-length record, spin, comes rendered in lowercase. The LP’s beginnings were simultaneously certain and uncertain, so this quiet choice aligns with the Scranton duo’s next move, released today via Black Cement Records. As vocalist, guitarist, and bassist Ben Walsh states, the band “had ultimately not made a decision on a label” to release their new material, but “when we started recording, we knew we wanted to work with Will [Yip].” That producer, who also worked on the 2014 LP, Charmer, helped the band ease into a new chapter that ultimately began a sudden transition when founding members, including primary vocalist Adam McIlwee, announced their departure from the group shortly after the Charmer sessions concluded.

Despite this roster shakeup, spin showcases a clearly upgraded version of the Tigers Jaw formula, adapted out of survival and space. Walsh and Collins allowed themselves an entire month to focus on recording with Yip, a timeline seemingly baffling to the factory-like precision and quality of his standard Studio 4 output. “We recorded song by song instead of instrument by instrument,” Walsh says of the process. “This helped us fully work out the ideas and tailor the tones and performances to the vibe of each individual song. No part of the process felt rushed at all — we were able to chase any idea we had. It allowed us to get some of the weirder ideas out and focus on what the songs really called for. We felt everything filled an appropriate amount of space and that each song had their own identity, but [each] added to the cohesion of the record as a whole.”

Charmer’s bright production seemed to consolidate, and not engulf, the band’s previous efforts for indie behemoth Run for Cover Records — 2010’s Two Worlds and 2008’s self-titled. Taken as a trio of records, if Tigers Jaw is the spunky, naive reintroduction and Two Worlds is the band’s first step into comfortable, sometimes geometric experimentation, then Charmer combines both approaches into a slick machine that also remains aware of its shortcomings through personal narrative. spin builds on Yip’s 2014 work with the band. Ringing guitar serves as both a trademark and a “you are here” marker through the record’s varied, yet united geography — while also adding more input from Collins, who first contributed a verse to “Hum,” the first single from Charmer, and what many considered to be the band’s comeback moment.

Collins joined Tigers Jaw as a keyboardist, and as she says of pre-spin, “you get really used to your role.” As the first record with some of her first full songwriting endeavors, the steady process of translating rough sketches to the full-bodied, often explosive versions on spin was eased by an extended creative environment. “I started writing by myself on acoustic guitar to get verse structure and vocal melodies. My boyfriend Shane Moran (of Title Fight) also helped bounce ideas back and forth. Now that I’m contributing songs and that it’s just me and Ben in there with Will, it’s a really great creative environment. The bones are there, lyrically they stem from my ideas, but it was a collaborative effort to bring them to what they are.” Just listen to “June,” spin’s second single, a midtempo indie-rocker west of The Breeders. Founded on a simple keyboard melody echoed in her confident, fibrous vocal phrases, its emboldened narrative — a love letter of sorts to female friendship — shines through the track’s vibrant, headstrong persona. Or take “Brass Ring,” a late album track musing on self-worth, while the rhythm section surges and swirls beneath Collins’ seesawing range. These two tracks, along with the piano-driven “Same Stone,” push forth the strength of incubating ideas in this Conshohocken, PA laboratory.

It’s also important to consider that Ben Walsh assumed a greater role in Tigers Jaw upon McIlwee’s departure, replacing his signature yelp with a calmer, more measured tone which raises spin closer to building more emotionally regulated arrangements. The lockstep of “Blurry Vision” features an interlude which bleeds into “Guardian,” the record’s first single and latest foray into Walsh’s permeable vulnerability. “A lot of lyrics on the record deal with mental wellness and advocating for yourself while being in mentally taxing relationships.” Aside from “Guardian,” “Favorite” tackles this earlier on the running order, pairing a need to “dull the pain” with “replacing” a figure in one’s life. “Bullet,” which follows “Guardian,” takes a cloaked approach, intertwining a slice of moody alt-country, comparing mental anguish to watching a gun fire at a target. It’s not as extreme as it could be, and the record’s built-in breathing room lessens tenacity to shrewd songwriting.

spin is the inaugural release on Black Cement Records, Yip’s second record label venture following his Run for Cover imprint Memory Music (on which Tigers Jaw’s acoustic LP was also the first release). “We had done three records with Run for Cover and were free agents,” Walsh explains. “We tried to expand our reach a little bit, and felt it was an appropriate time to go somewhere else.” Black Cement is the newest imprint from Atlantic Records, no stranger to the alternative scene, having acquired Fueled by Ramen from its beginnings in Gainesville punk and turning basement heroes into Billboard superstars.

“If you were to tell me a couple of years ago that we’d be approached by a major label, I’d probably have laughed it off,” Walsh says. But, Black Cement’s development was key in Tigers Jaw’s change of heart, specifically in the strategic decisions of bringing Yip on as a label ambassador and spending time “sitting on the sidelines for a while to research how we did things.”

Walsh continues, citing Saves the Day’s 2003 major-label flop In Reverie as a proof point. “Back in the early 2000s, all these bands were promised the world and were given unrealistic expectations. That was also the collapse of the CD era, and the structure of the music industry has changed so drastically that I think the major labels had to start taking cues from some of the smaller labels. They’re using their resources to bring us to a wider audience and learning from us and what we’ve accomplished to best do it.”

Tigers Jaw, according to Walsh, is a band based on the natural and the intuitive. Collins adds to this notion, stating “as long as these labels value their artists and why they exist in the first place, there’s no reason why it has to be a negative relationship.”