Matchmaking: the evolving narrative of pronoun 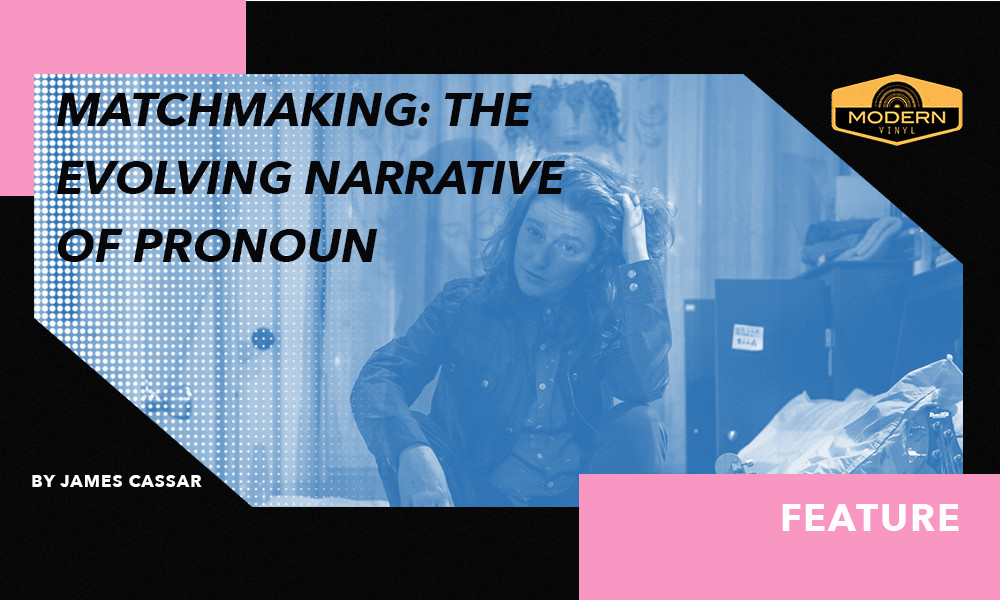 When removed from its context, a YouTube comment from user “horsecockphephner” just reads like every other scratch of buffoonish static from 45’s far-right. The comment is one of the most upvoted on the official video for “just cuz you can’t,” the lead single from Vellturo’s debut, There’s no one new around you. It broadcasts gratitude in digital deadpan: “Thank you for openly supporting Trump. We need more young, brave conservative musicians.” Perhaps it’s ironic that the false admiration comes shortly after pronoun recorded “it’s the way,” a live track penned directly after viewing the 2016 election results. At the song’s midway point, solo guitar gets accompanied by crisp, rolling snare when the track’s refrain bares its shy teeth: “It’s not the way you said it, but it’s the things you said, so I’m not being dramatic when I stay in bed.” All proceeds were forwarded to Planned Parenthood, and the song nearly celebrates this purpose, when pronoun’s full-band explosion — anchored by Sleep Well artists Sulene and Charles Fauna — swells and relaxes, before disappearing in a flash. Young and brave, yes, but in no avenue conserved.

pronoun functions highly in these passionate bursts of creativity, whether driven by a new administration (“When he was about to go into office, I said ‘fuck this, let’s record it live and do a video for it'”) or other pangs of despair. There’s no one new around you. is both a clipped phrase and a complete sentence, both thematically and literally. It’s named after the declaration Tinder offered up when Vellturo was out of matches on her first night using the dating app, drunk at 1 a.m. after the end of a three-year relationship. “I always made fun of people and said that I’d never use this. And then I got to the end and it said that. I thought it was kind of beautiful.”

The 2017 companion piece, Use Passport to choose a new location., is the solution presented to that empty stack of swipes, which also had an equally powerful naming convention. “I think that works very well too. It switches it up.” Songs which wobble between jagged dance-pop and simmering alternative rock (“a million other things”) on the former grow cavernous and distant on the latter, courtesy of Funeral Advantage’s rework into dark jangle rock. The solitary confinement of “snowed in” doubles and then dissipates at the hands of Charles Fauna, pronoun’s live drummer. By themselves, each release functions as a unit, both expressively manic and comfortably insular, but together, they extend pronoun’s status from Web 2.0 bedroom pop to careful, future-proof curation. “Use Passport… was built from songs from my Discover Weekly that I liked…I have an archive of songs that I update every week. I reached out to 60-70 acts, but a lot didn’t answer because There’s no one new around you. wasn’t out yet. I personally don’t like remixes that much, but I was happy that these artists were able to rework these tracks and make it their own.” (Since the release of both EPs, an additional rework of “snowed in” was made available from YesYes.)

Vellturo herself is no stranger to musical recomposition, having frozen Gnarls Barkley’s “Crazy” in half-time during one of pronoun’s SXSW sets this year, and she’s quick to dismiss skeptical newcomers. “Why wouldn’t you get a bunch of artists together that you love instead of spending $10,000 on a big name?” As she says it, like that one half-fermented 1 a.m., sometimes there aren’t any other options than what swirls in front of glazed eyes, glowing and true.

Returning to the video for “just cuz you can’t”: it’s another case study in Vellturo’s clever manipulations of time and space. Aided by the post-production color collection, the track’s punchy backbeat is filtered through lenses which cover the songwriter in hues slowly flickering between greens and golds. She seems to be flickering even slower, letting her eyes be the emotional cue while her limbs seem to drag through a post-breakup daze. Near the climax of the song, where pronoun’s guitars flare into exhausted screams, the action unfolds in reverse, with the establishing shot of Vellturo asleep in bed one of the parting moments. From the bedroom pronoun begins, to the bedroom it returns — if not to work on another conceptual arc, then to find new flames to capture.

There’s no new around you. and Use Passport to find a new location. are both available now via Rhyme & Reason Records/Sleep Well, with the former available for purchase on vinyl.