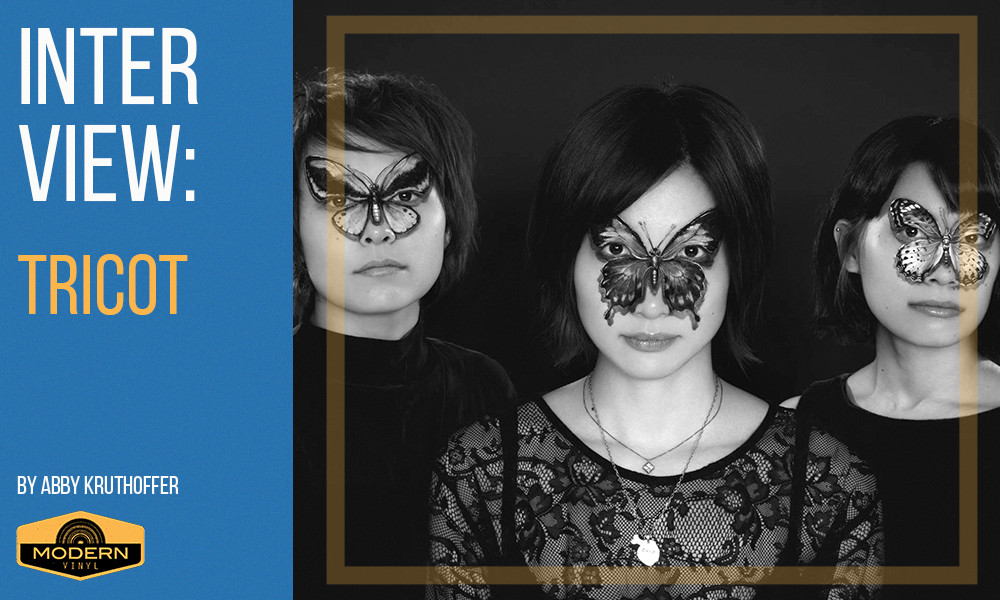 Getting distribution through Big Scary Monsters and Topshelf is an up-and-coming Japanese rock band called Tricot. The group formed in Kyoto back in 2010, with a unique, distinctive sound that encompasses various genres, including pop, rock, and emo — with a touch of math rock instilled (accidentally) in their sound.

The band’s latest release, 3, came out worldwide on May 19th, and they’ll be embarking on a tour of the U.K. and parts of Europe in August. We chatted with them about their musical training, what it’s like having their own record label, and music videos.

Modern Vinyl: How were you all musically trained?

Ikkyu Nakajima: I started out simply imitating various singers, then when I started practicing with band members I always imagined I was performing live.

Motoko “Motifour” Kida: I was copying songs from my favorite bands and then coming up with my own phrases to place into them.
Hiromi “hirohiro ” Sagane: My friends and older relatives taught me a lot of music. Like Motoko, I was always covering my favorite songs and imitating my favorite bassists.
MV: What’s it like to have your own label to put your music out on, and would you recommend it for other small bands?
MK: We’re free to do very much as we like, so we can be really flexible in what we choose to do. However, because there are fewer people involved, there are restrictions on what we can do sometimes, so I can’t recommend it for everyone. I think it depends on your situation.
MV: I hear a lot of metal chord progressions and emo influences in your music, but there’s also some rapping in songs like “Bakuretsu Panie San.” What are your some of your influences?
HS: We all have different influences and tastes in music, but I’m the emo fan, so that’s probably where that comes from in our sound.
MV: Where does this album compare to others you’ve written; did it take any different directions lyrically or musically?
IN: It was more fun for me because I relaxed even more than I have done before, and accepted everyone’s proposals for the songs in a positive way. Because our stand-in drummer is so talented and can play pretty much whatever we need, we knew we would get great performances but also be able to entrust arrangement details to him.
MV: Music videos seem to be a big part of Tricot’s image; do you come up with the video concepts? How do they all come together?

IN: When the song is completed, there’s always an image I have in mind that I want to draw alongside it, but for the moment we’ve not realized that ourselves yet. We often adopt proposals from video directors. I think that by always delegating to good directors who know what they’re doing, we’ve had good results and great videos have been made for our songs.

Abby Kruthoffer
Abby is a Cincinnati, Ohio native attending The Ohio State University for a degree that will hopefully lead her into the music industry. She plays guitar, watches too much comedy television, and also writes/manages for another music blog, The Indie Sound.