‘Fearless’ refuses to be a footnote 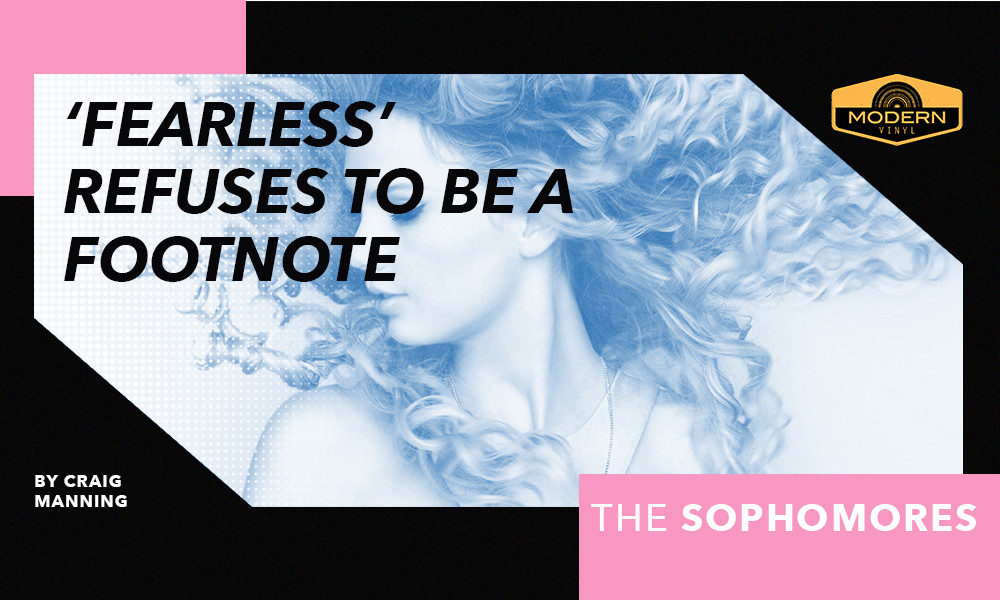 When Taylor Swift released her first record, 2006’s self-titled debut, she was 16 years old and situated pretty firmly in the country music genre. The way Swift tells it, most labels were reluctant to take on an artist as young as she was at the time. After all, when you sign a teenager — even one capable of penning number one country hits like “Our Song” and “Picture to Burn” — you can never be quite sure how they’re going to develop. With Swift, it became clear pretty early on that she was going to make the label that did sign her — Nashville’s Big Machine — a lot of money. With that said, I’m not sure anyone would have guessed how much money until Fearless.

By all accounts, Taylor Swift was a rousing success. “Our Song” made Swift the youngest solo writer to ever top the Billboard country chart. The other singles — “Picture to Burn,” “Teardrops On My Guitar,” “Should’ve Said No,” and “Tim McGraw” — were all successful on country radio, also crossing over to the pop charts. “Teardrops On My Guitar,” in particular, made it all the way to number 13 on the Billboard Hot 100, and seven on the Mainstream Top 40 chart. All told, the record was a top 10 seller in both 2007 and 2008, and went on to move more than five million units. Not bad for a debut.

But Fearless eclipsed Taylor’s debut to such an enormous extent that the self-titled is often regarded as a footnote in her career. Over the years, I’ve talked to a lot of people who have been won over by the charms of Swift’s music, and the majority of them either haven’t ever listened to the self-titled or view it as her “pre-fame” record. Only a sophomore album as massive, ubiquitous, and straight-up great as Fearless could achieve this kind of head-scratching revisionist history.

But there’s a reason the self-titled gets relegated to “dubious debut” status by most listeners. Despite the fact it’s stacked with hits, it still feels half-formed. It sounds like a teen pop album. Very little of the Swift we know today — the world-conquering, badass woman who’s notched three albums in a row that sold a million copies their first week — is there on record number one. Everything from the lyrics, to the voice, to the girl on the album cover seems disconnected from the icon we know today. Fearless is a bigger, bolder, and better-sounding record, and it’s where The Taylor Swift (emphasis on the capital T in “The”) comes into focus.

Looking back, it’s easy to give most of the credit to the hits. Like its predecessor, Fearless spawned five singles. Two of them were ubiquitous, the first being “Love Story,” the album’s lead single and biggest hit. It topped the country charts and the pop charts, becoming the first country song since Shania Twain’s “You’re Still the One” to dominate the pop conversation in that manner. The second, “You Belong With Me,” only made it to number 2 on the Mainstream Top 40 chart, but sure seemed as inescapable as “Love Story.” Both Weird Al and Butch Walker put their own twists on “You Belong with Me,” and Walker’s cover even earned him a spot performing next to Taylor (and Stevie Nicks) on the Grammy telecast.

But while “Love Story” and “You Belong to Me” are the linchpins — the karaoke classics everybody knows and just about everyone loves — Fearless was a start-to-finish album where its predecessor had mostly been a vehicle for singles. At the risk of sounding cheesy, Taylor outlined the difference right there in the album title. Her debut had been tentative, characterized by an obvious sense of songcraft, but also by some of the shyness you’d expect from an artist who wrote all the songs while she was a freshman in high school. In the album jacket of Fearless, Taylor wrote that, to her, “fearless is living in spite of the things that scare you to death.” This album, with its tighter storytelling, radiant melodies, and rich vocals, internalized that belief and made it a mission statement.

On the first record, most of the songs were co-writes with country music songwriter Liz Rose. Only three of the tracks were songs Taylor wrote completely by herself. After the record came out, she spent time on the road opening for the likes of Tim McGraw and Faith Hill, George Strait, Brad Paisley, and the Rascal Flatts. Inspired by her idols and left with a lot of time to kill between tour destinations, Taylor started writing for album number two. As a result, she took solo writing credits on eight of the Fearless songs — including the record-breaking “Love Story” — and began to develop her own unique voice as a writer. (Her next record, 2010’s Speak Now, is the rare album from a pop superstar with no co-writes at all.)

Taylor’s songs here ache with youthful naïveté and the sting of first heartbreak, but she also sings with wisdom and relatability beyond her years. “Fifteen” did high school nostalgia so well that you almost forgot Swift probably wrote it when she was still in high school. “Change” is a resilient anthem that sounded more confident than anything on the first record. “The Way I Loved You” distilled the brash, infuriating, inexplicable wonderfulness of young love into one of the album’s many earworms. And “Breathe” remains one of the all-time great sad highway songs, a breakup ballad from the girl who would become a generation’s queen of breakup ballads.

Taylor would refine all these ingredients on future albums. Looking past Fearless, the breakup ballads hurt more (“Last Kiss,” “All Too Well”), the anthems ring louder (“Long Live,” “State of Grace”), and the poppy earworms become even catchier (“We Are Never Getting Back Together,” pretty much the entirety of 1989). Today, Fearless is neither Taylor’s best album nor the one that feels like her watershed cultural moment. 2012’s Red stands as her artistic and musical peak, while 2014’s 1989 attained a level of ubiquity that was new, even for an artist who had already conquered the world.

But Fearless hasn’t been turned into a footnote in the Taylor Swift legacy like her debut album has, if only because this record is where she really became Taylor Swift. She started growing beyond her country roots and embracing pop in more obvious ways. (“You Belong with Me” is her first song that is more pop than country.) She won Album of the Year at the Grammys and Entertainer of the Year at the CMAs. (She was the youngest person ever to win either award.) She got slighted by Kanye West at a mostly meaningless award show, kicking off a pop culture war that refuses to die. She met and started dating all those famous boys who would form the backbone to the stories on Speak Now. But most of all, she came into her own as a damn fine songwriter, and the better part of a decade later, she’s still out-writing anyone else in the pop game.