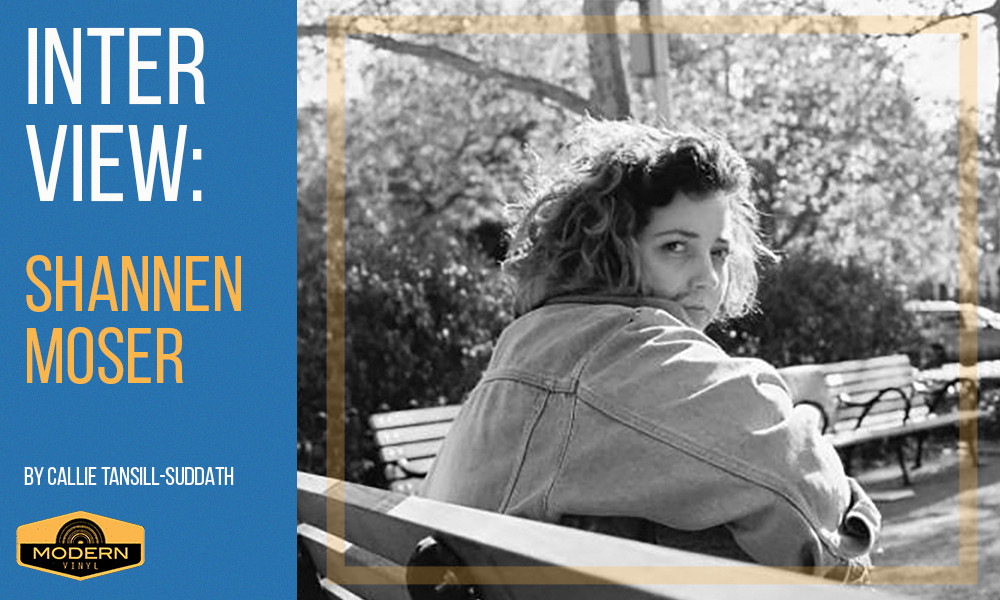 2017 is Shannen Moser’s year. In a mere six months, the Philadelphia-based folk musician released her debut album, Oh, My Heart, and soon supported acts like Pinegrove and Sorority Noise. With another East Coast tour in the works and an acoustic video series (one entry of which is viewable below) being released through her new label home, Lame-O Records, Moser has no plans to slow down.

We caught up with Shannen between shows last week and chatted about her album, her musical style, and what the future holds for one of the year’s most promising new acts.

Modern Vinyl: Did you say you’re in a van right now?

Shannen Moser: We’re currently traveling to Wisconsin and we’re going to play a college gig in Madison right on the water. It’s gonna be an outside gig; I’m so excited.

SM: Well, I’ve never played an outdoor show before so I’m excited to see what that’s like.

MV: You’ve been touring a lot lately. Who are you on tour with now?

SM: So the first week and a half of the tour I’m on right now is with Forth Wanderers and then the last five days we’re gonna be meeting up with Sorority Noise and The Obsessives which we’re really stoked about (Editor’s Note: This tour recently wrapped). We’re going to be playing a few very close-together East Coast shows with them the last five days.

MV: The last leg of the Sorority Noise show is almost entirely acts from Philly. Is that where you’re from originally?

SM: I’m from Berks County, Pennsylvania — like an hour and a half north of Philadelphia. It’s super rural, but it’s really beautiful and there’s a lot of cool stuff going on over there, like its historical side, but not a lot else. It’s not a place you’d want to live in forever.

MV: Do you think growing up in such a place influences the music you create?

SM: Definitely. There isn’t a gigantic music scene in Berks County. There is a small one; a lot of stuff happened in the Kutztown area and that’s all over the place. There’s a bunch of types of music happening there, but I think the area really lent itself to engaging me in the type of music I like to listen to even now, like a lot of Appalachian folk. There’s a practice called sacred harp singing (or shape note singing) that started in the South. It’s really cool, and that goes on in Berks County as well. I think all of those things combined definitely angled me towards the thing I’m doing now.

MV: Are there any specific artists, in addition to that, that you draw a lot of inspiration from?

SM: All of my friends that I talk to now were part of scenes growing up in the D.C. area, or knew about the Philly scene, or knew about bands that are now considered super important and legendary. I wasn’t exposed to any of that. I didn’t really find out about the Philly scene until I moved when I was like 19 or 20. I was cut off from a lot of that stuff. So the things I was listening to were like Joni Mitchell and the Carter family, and things that people really enjoyed in the area I grew up in. I think that is largely why I write the type of music I do now.

Also, Berks County is so beautiful. Specifically Oley Valley, where I’m from. It’s just like federally protected farmland. There’s not a lot of building that goes on there. So I think all of those things are definitely really, really important in the evolution of the way I made music in the past.

MV: Lyrically your album is very earnest, and the sound of it is very organic. It focuses on your vocals and the instrumentals are minimal. Could you expand on how you chose to approach this?

MV: It’s really interesting and inspiring to hear from someone who is creating and successfully releasing music, but who hasn’t been playing guitar for years and didn’t grow up performing in bands when they were younger.

MV: So what would you say your creative process entails?

SM: It’s always in flux. For the longest time I played by myself, just like as a solo artist, and in the last two years I’ve been kind of piecing together a band. The way that I write hasn’t really changed. It’s always words first…no, actually that’s a lie, it’s different all the time. It sounds so silly and overdone; when you feel like you have something to pull out of yourself is when I do a lot of writing and it all happens really fast, like back to back to back, so there will be a week where I really feel something. With a lot of the material I write, I’ll be like, “I think that’s relatable universally?,” but it always starts as a very personal thing. I couldn’t sit down and be like, “okay I’m going to write a song right now” and be happy with that. The writing process is super organic for me and super emotive.

Once I have the foundation of the song, I’ll take it to my band and the people I work with and touch on the idea with them and then we write together, moving forward after that. The arrangements are always changing just because the band has been in such flux for so long, but I think that’s like the cool part about being a solo artist because it doesn’t have to be any one thing and it can be like whatever you want it to be.

MV: And how long have you been working on the material that is on “Oh, My Heart”?

SM: Oh boy! So some of those songs are like four or five years old. A lot of them are newer, but that record took a long time to make — just getting the arrangements together took about a year or so.

MV: What was the recording process like? Was there anything that made it nontraditional?

SM: So Eric Muth, my guitar player, and I went to a barn in upstate New York to track the foundations of all the songs. It was a really, really cool experience. The barn just sounded so good. There was so much natural reverb and it’s also a place that reminded me of home; a place that a lot of the songs were kind of about. That was really neat because it had that same kind of aesthetic, location, sound and feel all in one space. It was like a work vacation, then we took that stuff to Philly and it kind of sat in a corner for a while, and then we finished everything up over the winter. There was a really crazy snowstorm in the very beginning of January so we just busted out like three days of recording all at once, so the end of things happened really fast, but I am happy with every step of that process.

MV: Do you have a favorite song on the album, or is there one that you are perhaps most proud of?

SM: I guess my favorite song on the record is the last song, “Dirt and Water.” That was really fun to record a lot of auxiliary, a lot of improvising, and a lot of “let’s see if this works” in the barn in upstate New York.

There are a few interludes on the record — like the first sample song — that are really special to me as well.

MV: What is the first sample song from?

SM: It is a sacred harp hymn called “I’m Going Home,” so all the lyrics in that song are very special to me, and kind of say “death isn’t so bad” and that’s something I’ve really struggled with — the fear of mortality — so the sample on the record is from an older concert hall performance of that. But the first time I ever sang that song was a very powerful moment, and I felt like it would be a really cool way to start the record and kind of like weigh out what was going on.

MV: Switching gears: you’ve been touring a lot. It seems as though every time I see a show bill you’re one of the performers. Have these past few months since the album was released been your first exposure to touring on this scale?

SM: Yes, absolutely. I’ve been on small weekend tours before but nothing more than four or five days. And just like the scale of this tour feels a little larger than the things I’ve done in the past, but it has been good. You kind of like have to — if you’ve never done this before — get your “tour legs” on and it definitely took a few days to get acclimated to the schedule and the repetitiveness.

MV: Have there been any particularly memorable moments?

SM: There have been a lot of cool moments where I’m reminded of why I’m doing this. We played a show in Detroit two nights ago and it wasn’t even a spectacular turnout or anything, but the band that opened called Get Tall were just like really, really sweet and really stoked on music. It was just one of those things where it reminded me of myself a few years ago and I feel like the natural progression of things is to get a little more jaded and a little more not as excited about your music scene just as you get older. These kids made me feel like I was 19 again.

Shannen just wrapped up some tour dates with Sorority Noise, and will be on another small tour with Slaughter Beach, Dog in August. The “Summer Tour ’17 Baby” will be hitting the East Coast; dates can be found below. Oh, My Heart is available now via Lame-O Records. 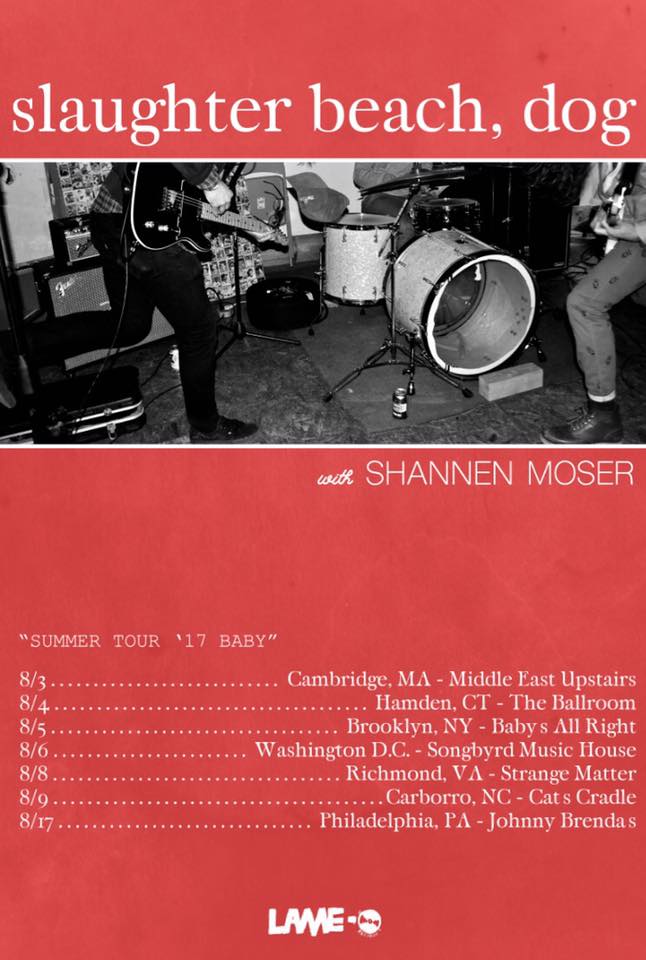