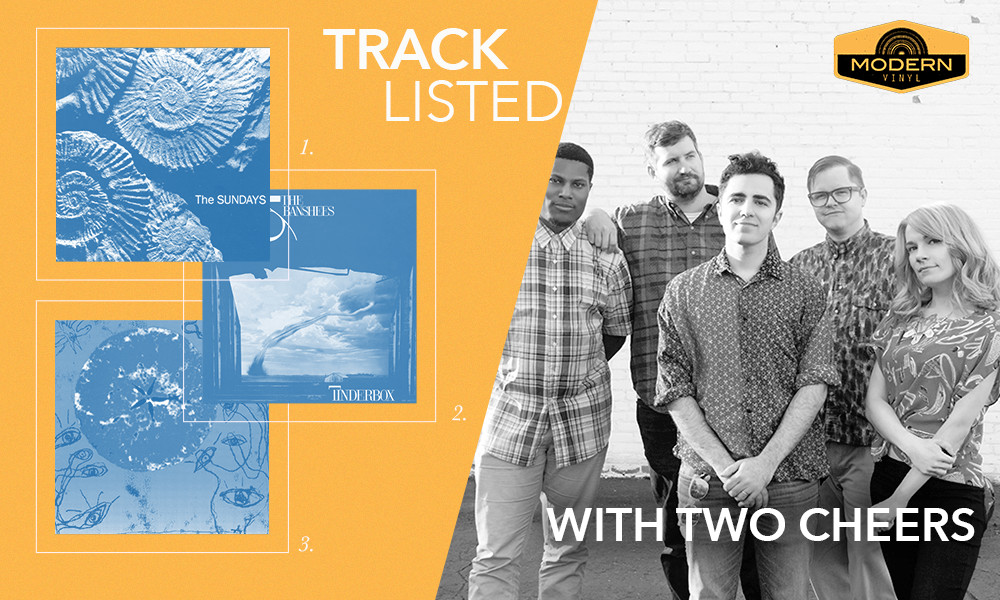 Detroit indie-rockers Two Cheers have returned with a new single as lead up to their new album, which is set for release on July 14. Their press release states the band is the result of “If Robert Smith (of The Cure) and The 1975 had a passionate lovechild…” It’s appropriate, given the single, “No Good At Talking,” is at once a throwback to ’80s rock yore and at another a contemporary pop charm.

The band has contributed a Tracklisted with a playlist that reflects their take on the new album, which they’ve detailed below:

“These are some of the songs that inspired the sounds and arrangements on our new record, Rollick. They are mostly songs that come from the late ’80s or very early, pre-grunge ’90s. This is an era that is somewhat maligned as being generic or formulaic, and being both post-New Wave and pre-Nirvana/Oasis, it’s somewhat forgotten I think. But there were so many consummate artists writing, recording, and performing at the time, especially in the UK, and a lot of them had big label budgets that allowed them to make really creative music that was expertly produced.

The songs on this playlist are characterized by a clean, chorused guitar sound, sparkly acoustic guitars, judicious use of synths, distinctive vocal styles, and really poignant lyrics. The songs all have that irresistibly bittersweet-but-catchy thing going on that gets me every time.”

The Sundays — Can’t Be Sure

I’m enchanted by her voice; it’s so effortless, so expressive and so sincere. This song is so minimal; it’s mostly guitar, voice and drum machine for the first half of the song. I aspire to making the most out of the fewest instruments possible. I often feel like I can’t be sure about anything, and in fact I’m often paralyzed by that sentiment.

A really underrated “shoegaze” band. This song is just so simple, so pleasant and so cool. I love the hypnotic repetition as it’s just two alternating chords. But they keep it interesting by changing up the instrumentation throughout the song, and by playing with all the layers of piano, clean guitar, electric guitar, droning synth. At our wedding, this was me and my wife’s first dance.

The Church — Almost With You

These guys are best known for their hit “Under The Milky Way,” but they have a huge back catalog dating back to the early ’80s. The singer has such a laid back, sensual baritone; I wish I had that voice! I also really connect with the concept of being “almost with” someone; it’s a palpable phenomenon, and it’s such a great thing to key in on and write a song about.

Siouxsie and The Banshees — Cities In Dust

I love these guys because despite being punk rockers at first and then morphing into an artsy post-punk band, they could make really striking pop songs if they wanted to without losing their dark, literary edge. Siouxsie is such an unusual rock star and to me she seems mysterious, spooky and aloof in the most alluring way.

What I like about Morrissey is that he can take a few simple words from his diary and turn it into a song, using his voice and phrasing to add dramatic weight, drawing out words and playing with intonation to intrigue and emphasize. At first the cheerful, upbeat music makes it sound like he doesn’t mean what he’s saying, but as the song progresses, more details are revealed and you see a kind of resignation settle in, which is sadder than any minor chord could convey.

I don’t think anyone loves this song as much as I do, but for me it really hits the spot: unusual beat, big chorused bass line, trance-inducing groove, untouchable Bjork vocals, weird little sounds coming in and out, and lyrics that sound innocent but are actually kind of strange. It sounds improvised, or written quickly, and it has a rough, thrown together feel that I really like too.

Cocteau Twins — Know Who You Are At Every Age

Maybe an unexpected pick from this group, but this song gets me in the gut. The melody is so perfect and Fraser’s singing is heartbreaking, longing and genuine. She is really an inspiring vocalist and a serious artist; she can access so many different textures with her voice, add in breaths and noises to create unexpected rhythms, and make her made-up language sound universal. This song was a companion when I left my life in California and moved to Michigan; I remember listening to it the last time I went to the Pacific Ocean.

The Cure — To Wish Impossible Things

We get compared to the Cure a lot because of my voice, but I think we diverge in so many ways that it’s not a fair comparison. That said, The Cure really helped define the late ’80s and early ’90s in England, and I’d be lying if I said they weren’t an influence. This lesser known song is really different than what a lot of people think of when they think of The Cure — the gorgeous, aching viola, the sparse drums with ringing gong, the delicate acoustic guitar hovering over huge baritone guitar arpeggios. The lyrics are not spellbinding, but they ring true and are easy to connect with; as I get older I identify with them more and more as possibilities dry up and my path in life becomes narrower, for better or for worse.

I don’t have a lot to say about this, I just think it captures a certain happy-go-lucky, careless-vibe that resonates with me sometimes (like after a day in the sun) and I love the video for it. Her band is so good. The chorus chord progression really caught me off guard when I first heard it, and it inspired me to try to use some more atypical sounding chords in some of the songs on the new record, like “Woman…” and “Woodshed”

Mazzy Star — Fade Into You

I love the bare bones production on this. It’s all attitude, feeling and melody on this song, and of course the singer’s beautiful, sultry voice. Like in some other songs on this list, the chord progression doesn’t change throughout the whole song, but it never gets boring. The slide guitar is a nice touch that, alongside the vocals, really makes the song memorable. The reverb sounds great. Another example of lyrics that are hard to decipher, but it doesn’t even matter.

You can pre-order the new album digitally here.