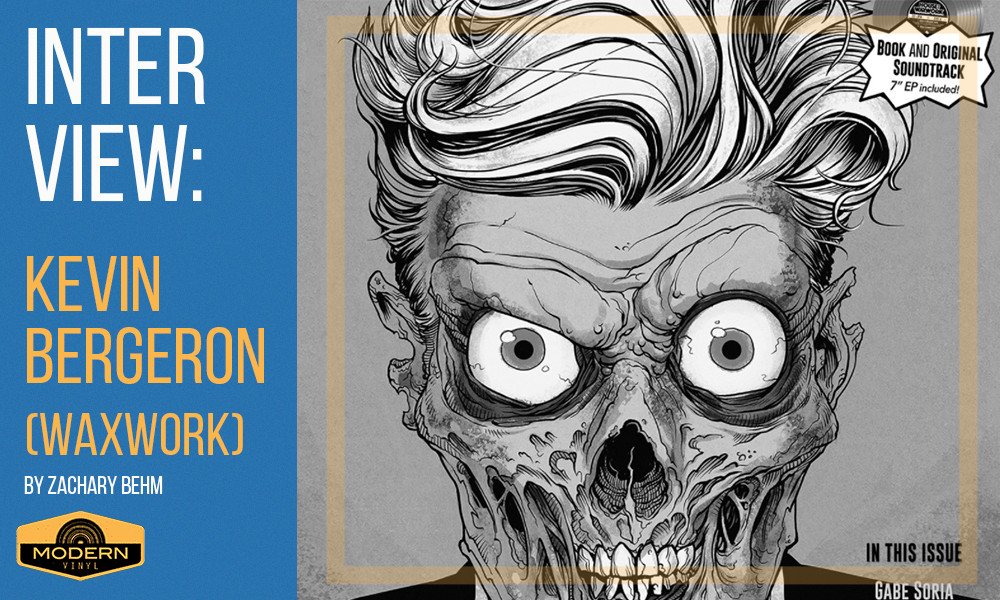 Modern Vinyl: I have always associated Waxwork Records with comic books because of soundtrack releases like “Creepshow” (a film based on a popular comic), and “Trick R’ Treat” (a film inspired by horror comics). For the latter you even got Francesco Francavilla, a popular comic book artist working today to do the artwork for your release. To me, it’s clear you have a close relationship with horror comics. Where did that relationship with horror comics, or just comic books in general, first form for you?

Kevin Bergeron: There’s an obvious tie in to what we do with Waxwork Records and comics. Even when we weren’t thinking about it, we were already dipping our toes into the comic industry waters by releasing some of our soundtrack titles like Creepshow and Trick ‘R Treat and working with artists like Francesco, as you mention. Ultimately, we want Waxwork to be fun. That’s really important to us. My first introduction to comics in general was at a hole-in-the-wall comic book shop/baseball card trading spot in New Orleans. My father brought me there, and out of the thousands of comics there, I somehow managed to find a box of old EC comics titles (Tales From the Crypt, Weird Science). I just navigated to that stuff, especially early on. I bought a Tales From The Crypt comic and wish I knew what happened to it! After that, anything animated and spooky were gobbled up by me immediately.

MV: As you recently stated in an Instagram post, Waxwork Comics and “House of Waxwork” has been in development for around 2 years. How long had the idea been floating in your head before you said, “okay, this is something we can actually do?” What lead to you having this realization?

KB: The idea to have a publishing division of Waxwork has been discussed since we launched back in 2013, but the idea to launch a comic book, specifically House of Waxwork, was a very quick and out of the blue thing. Myself and Waxwork’s co-owner, Suzy, were in Seattle visiting our distributor when I sort of just announced we should release comics with 7″ vinyl soundtracks. It seemed like a unique idea to us both, and something we could really dig into. So, when we returned to New Orleans, where we are headquartered, we immediately began developing Waxwork Comics and House of Waxwork.

MV: So you come up with the idea, you realize it’s something that can really happen, what was the next step? Do you immediately start thinking about artists? Writers? Story ideas?

KB: Yes, exactly. We then started reaching out to artists and illustrators we love. Writers, letterers, everyone. We always shoot for the moon, so we were hitting up some big players who have wild schedules with bigger comic book companies. We have an awesome track record to show with our record label, so the segue into comics was natural. Although, it was a big learning experience. The comic book world is much different than the record industry. And we’re marrying the two together.

KB: The biggest difference is that we are actually creating our own intellectual property, rather than licensing soundtracks from movies that already have an enormous audience. We’re fully aware that by doing this, it’s the riskier movie. But for us, we think creating new content is the future for Waxwork. I really love releasing soundtracks, and that’s not going to stop. We have so many soundtracks in the pipeline to power through, but I can say with confidence that everyone at Waxwork is creative, and we want to make new things and put them out there for others to experience. And that’s a challenge in and of itself. Putting yourself out there, dumping a lot of money into something with no history or franchise attached to it, and seeing how it goes. The fact that Waxwork Comics has been received so well, right out the gate, has been really rewarding. We’re already printing our second run of House of Waxwork Issue #1 less than a week after the debut of the series. This is what we do, now.

MV: It looks like music is going to play a big role in the comic story itself. When I see the character name “The De-composer,” I feel like perhaps the “composer” indicates the character will have some music connection, a clever idea given what Waxwork does. Am I correct in saying this? Other than the included record, will music be playing into the Waxwork Comics world? And how?

KB: That’s right, The De-Composer is definitely a musical character, and he will make his debut in Issue #3. All of these characters like The De-Composer and The Die-Rector will have back stories and entire narratives around them. Music is a big part of Waxwork Comics. It’s half of the experience. You literally listen to the companion 7″ colored vinyl while reading the stories in the comic books. The music serves as a “soundtrack” to the stories. Really fun and immersive stuff.

MV: I’d like to talk about the vinyl included. Did you know from the the idea’s inception that a record would accompany this release? How did this process work?

KB: Yes, from the beginning we knew that we wanted to incorporate a musical element and thought that including a 7″ vinyl record with music would be perfect. Initially we tossed around the idea of developing stories from existing properties and pressing the theme songs on the record. However, Suzy and I decided that instead of licensing properties, we should develop original stories and music, which would be much more rewarding. No one else was doing this. We were thrilled to launch something new that was wholly original.

MV: Tell me a little about the musicians you worked with for the music component.

KB: We have a roster of composers we’ve worked with at Waxwork Records, so we naturally reached out to Douglas Pipes and Jonathan Snipes to contribute some original, scary songs for the soundtracks. I’m also doing some of the music myself, which has been really exciting. Right now, we are working with Sean Yseult, who played bass for White Zombie. She’s writing an original song for House Of Waxwork.

MV: You have worked with Douglas Pipes before with your “Krampus” and “Trick R’ Treat” release. How did you approach him for this project? It’s such a unique idea to have a score and theme for a comic book, so was he down with the idea from the start, or did it take some convincing?

KB: I just rang Douglas. We have a good relationship and love working together. He loved the idea and he was such a massive and integral part to the getting the music of the comics rolling. Working with him has been so exciting and positive.

MV: When I saw the video Waxwork posted of the Budapest Scoring Symphonic Orchestra performing the “House of Waxwork” theme I was really blown away. I could immediately tell this was a very serious project for you, and you were putting everything you had into it. What was it like working with a full size orchestra to create this new material? Were you in there with Pipes? Or did you just let him do his thing?

KB: We put a lot of work into creating the House Of Waxwork theme song. Myself and Rami Sharkey composed the song, Douglas Pipes orchestrated it all, and we were able to perform and record it with a 40 piece orchestra in Budapest. This was my first transition into playing and recording music again since my last band dismembered and I started Waxwork Records. I took it very seriously, and focused on it for a month. Mixing the song down to get it perfect was very important. There were so many takes and so many players involved, and it really gave me some insight into the world of composing for picture. I think I caught the bug, and it’s something I think about a lot. I just want to get back in there and make music!

MV: I see you are listed as a writer, what was it like stepping out of the music world — a world you have a long history with — and stepping into the world of writing comics? Is it something you had toyed with before? Has it always been a dream of yours?

KB: I have some history with writing for personal enjoyment, and I bounced around majors when in college and ended up settling on English/Literature, so it’s in me, and I just needed to get it out. The story I wrote for House Of Waxwork Issue 1 is titled Lighthouse Keeper, and it’s the first time I’ve written something, published it, and put it out in the world. I’m really proud of it. If I have enough time, I’ll most likely contribute more stories to Waxwork Comics.

MV: Gabe Soria, who pens “Occult Slumber Party,” is currently known for his work on the comic “Batman 66,” so it seems like a perfect pairing to have him writing on a project like this, one that is somewhat rooted in nostalgia. What was it like working with Gabe?

MV: There are so many artists listed for only 32 pages, with two stories. How do all these artists fit into the comic? Or do you not want to spoil the surprise?

KB: I know, right?! Reading the cover and the first page is kind of crazy, isn’t it? There are a lot of artists and other creatives involved, and they all deserve credit, of course. It’s all divided up, and it all makes sense. Justin Erickson of Phantom City Creative is on cover, and we have worked with him countless times with Waxwork Records on soundtrack album art. Ghoulish Gary Pullin created the ad. Arik Roper created the logo and he’s also the co-creator of main characters like The Die-Rector and The De-Composer. It’s awesome being able to work with new talent from the comic book world, too.

MV: What does the future for Waxwork Comics look like? This is just issue 1, so how often will there be a “House of Waxwork” release? Are there any graphic novel ideas you have in mind?

KB: It’s looking good. We’re already ready to release four issues, and we’re working on more. It would be nice to hit a bi-monthly release groove. We’re also about to release the first issue of our next series, Poser, which can best be described as a slasher that takes place in the southern California’s punk scene. Think Friday The 13th meets The Decline Of Western Civilization. We already have some graphic novels in the works, as well! Really fun stuff that isn’t limited to just horror either. Stories for everyone. Stories for young readers, too! 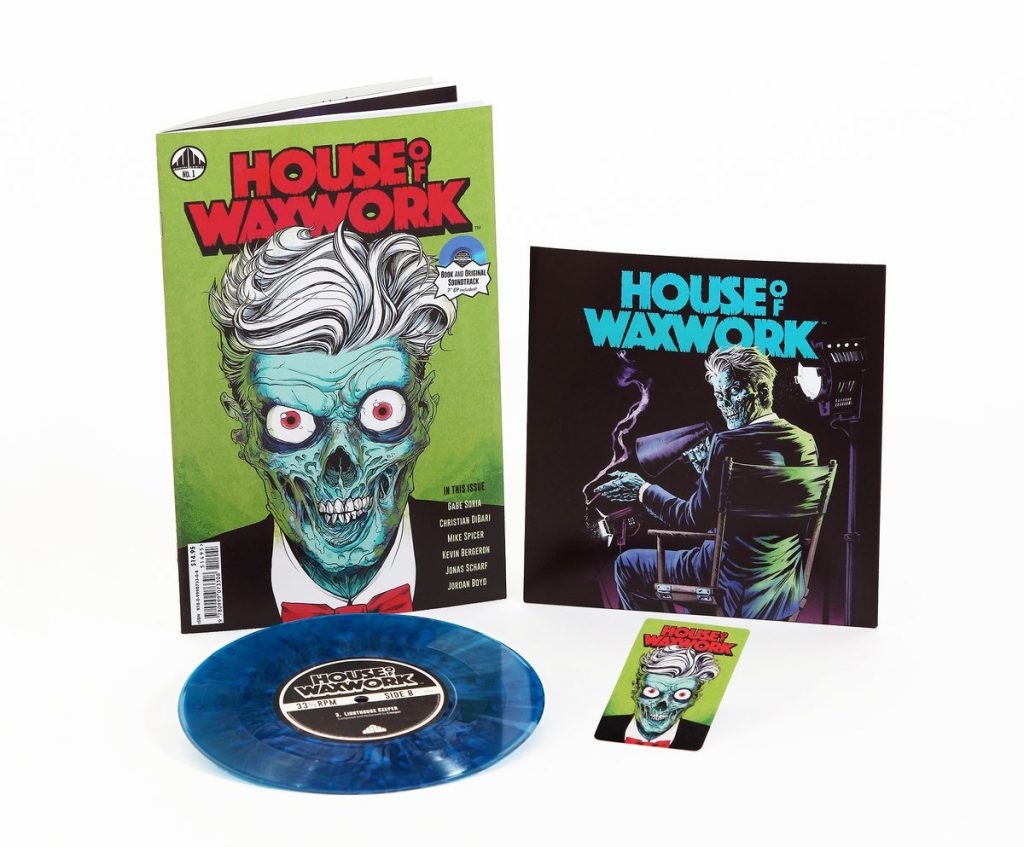 You can currently pick up the first issue of Waxwork Comics over at their site. Both vinyl versions are available.