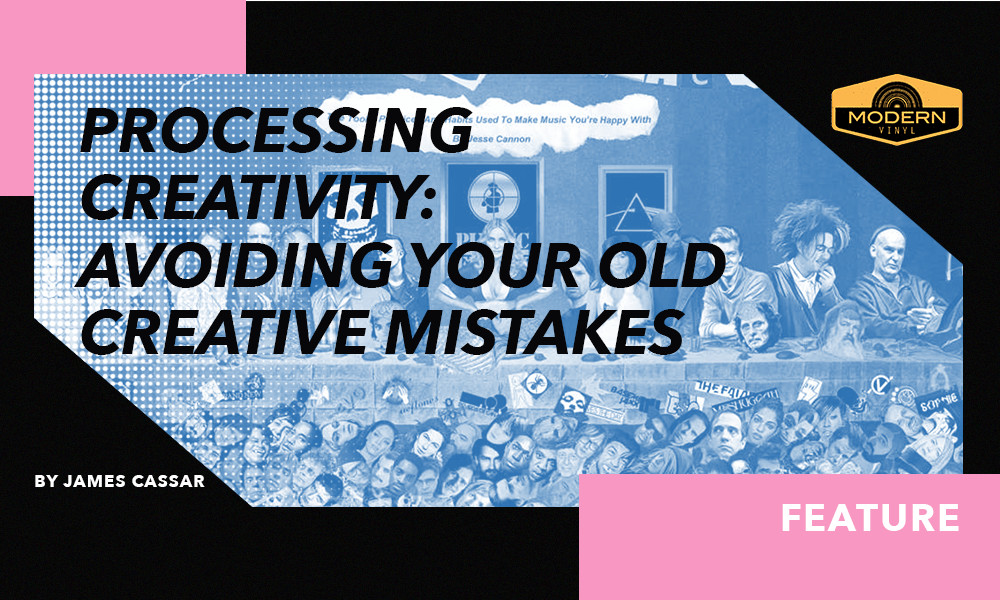 Jesse Cannon is a name you’ve probably seen before if you’ve been privy to the punk-adjacent (or punk-proper) world of the past 10 years. His Cannon Found Soundation studios have been responsible for records from everyone from Northstar to The Dillinger Escape Plan, whether as a full process from pre-production to final masters — see Man Overboard’s breakout LP Real Talk for a sterling example — or recalibrating an experience for the vinyl format, as he’s done for the majority of remastered reissues from Bad Timing Records. (For a quick dive into Jesse Cannon’s career, including work on The Cure’s self-titled record and every artist mentioned above, check out the MV-curated playlist below.)

He and I spoke while he was on a self-imposed “exhaustion leave,” whether prompted from the “million mix changes that should’ve been done a week ago” or the promotional cycle for his latest book, Processing Creativity: The Tools, Practices, and Habits to Make Music You’re Happy With. He never seemed too exasperated with his craft, though, even if he’s seen the creative cycles repeat (“every 10 years, someone forgets these things and they have to be brought back”) or get locked into a dangerous loop. He’s here to help your band unlock true artistic potential, ever since a producer seemed to abandon his own decades ago. “The reason I got started as a producer is because the guy wouldn’t turn the ’80s reverb off our punk songs, so I decided to read a few books and call myself one.”

In regards to producing his own work — following Get More Fans: The DIY Guide to the New Music Business — Cannon spent four years researching creativity in academic fields like psychology, while drawing from writers Naomi Klein and Thomas Frank outside the classroom syllabus, while then spending two days a week during his busy recording schedules to rewrite these theories for a wider audience. The e-book version features links to countless articles and empirical studies integral to Creativity, creating a knowledge base beyond what Cannon built. “I had to write this for people who hadn’t read a book since high school. I ran into a kid who was reading this book and [I] asked him why he picked it up, without explaining who I was. He said that anyone who worked with Leftover Crack and could write a book must be cool.”

Much like Get More Fans, new book Processing Creativity delivers advice that can be read all the way through or with the parts divorced from the whole. The latter approach proves one central thesis: every musician processes creativity differently, and so not all elements will add to a winning release of that energy. “Every band is a different band that’s getting fucked by these topics. Most people have gone and done one second of research and built their records around their favorites, for example. Every band needs one of these chapters, but no one wants to hear a Brooklyn hipster yell at you.” But in case a Brooklyn hipster yelling at you sounds like a dream come true, the audiobook version finds Cannon donning different voices to drive home the inconsistencies present between artistic types. All the vocal dress-up, spritzing in humor amid the author’s dry wit and matter-of-fact writing style, just showcases that it’s better for a songwriter to be authentic than follow the herd. “I realized that most creativity advice for musicians sucks because most of music is about emotion. You’ll hear all these suits say ‘the customer’s always right,’ which isn’t true. A lot of the book came from getting mad over the stupid things people said and wanting to correct that.”

Processing Creativity spends most of its time deconstructing the concept of emotional resonance — what drives creatives to write things that speak to them — while also underlining a producer’s role in that discovery. As Cannon explains about his profession, “I do whatever somebody wants, and then I make another version of what I think is best — but I’m not the boss.” The producer’s role, as Cannon writes, is to drive a hard line between inspiration and imitation. “With musicians, influence can oftentimes be harmful — because you bring in what’s most close and most authentic to you. Somos’ Michael Fiorentino is really into Billy Bragg, for example. It helps that it’s one of his favorite things.” (Listen to the cavernous, ideological Temple of Plenty, which Cannon brought to life, and you’ll find that the only Bragg holdover exists as gloves-off storytelling power.) Emotional resonance is also an evolutionary creature, transforming as more culture and experience is consumed. “Everybody grows up playing Green Day and blink-182 and then you get older and find the other ingredients to your emotions. You find those elements that are unique to you and celebrate them. When you suppress those things, it’s not as resonate to you.”

The other concept Cannon wrestles with in Processing Creativity is in its presentation. By opting to have his book self-published by Noise Creators — a podcast and site matching young acts with its growing network of producers, Cannon has achieved ultimate creative control with a book that intends for others to capitalize on that notion. “I spent 170 hours doing that cover — I hadn’t done graphic design in 20 years. I wanted to make this fuckin’ art. When you have a strong vision, people who just want to add to your vision superfluously isn’t a good thing. I didn’t feel like I needed to be DIY, but there’s no fuckin’ money in this. I’m not afraid to say this: I’m about to be 40 and need to be compensated for my work.” (Superfluous is another one of Cannon’s central words in Processing Creativity, used liberally like a swear word to underscore the issues with having two many minds poking around an artistic vision.)

Processing Creativity dissects two crucial relationships. In the relationship between artist and producer, the artist’s emotional ties usually win out. In Cannon’s words, “what would’ve happened if someone told Nirvana too many songs went from quiet to loud on Nevermind?” The other bond is between an artist and their craft, and to present it in a way that’s heightened, but not closed off, is perhaps the book’s most challenging payoff. “When I was young, there were the beacons of knowledge. Information is now democratized – I want to bring in the new good lessons I learned and elevate the conversations through that process, even though a lot of them are from other disciplines.”

Like any band with good chemistry, proper synergy is key, and Cannon’s latest statement hits the notes that every musician, budding or otherwise, should hear.