Tracklisted…with The So Help Me’s 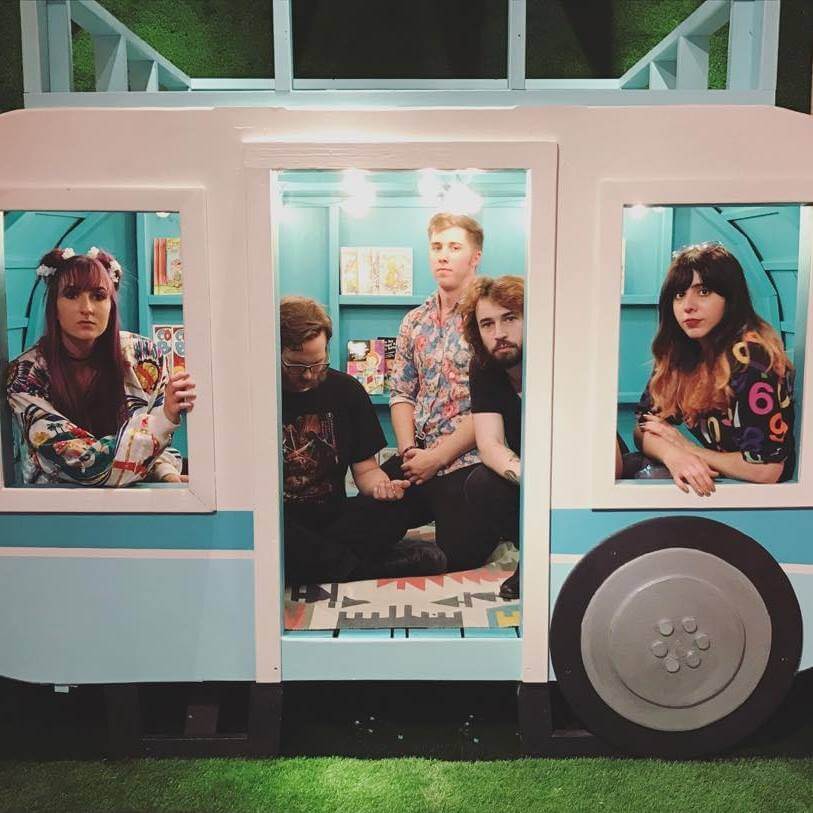 Oklahoma City’s The So Help Me’s are an existential rock band led by Lindsey Cox and Sophia Massad. The combination of their lyrics with their music helps to navigate how large the universe is in our world today, and how life and relationships work into that bigger picture. When they perform, their live shows are interactive, and have been described as “Wes Anderson in Space.”

Today, not only are we happy to premiere their song “Starlight Dread,” but they also have a Tracklisted for us that they said represents the top songs that influenced each of the members this month, because they all have a diverse taste in music.

“Starlight Dread” is a mix of fun, mainstream indie pop that blends seamlessly with rhythmic folk music. The song fits perfectly with the existential thoughts that the band has been known for over the past few years. Look deeply into the song, and you’ll discover lyrics that question why an individual ego is important in the span of a large, often incomprehensible universe.

Sufjan’s Carrie and Lowell is a towering, crowning achievement in the American songwriting tradition; I can imagine Paul Simon or Bob Dylan taking notes. Ghosts of childhood memories flit between Biblical allegory and the reality of a present that seems dark and confusing. This album is as much a celebration of life as it is rumination on death; it is a thing of monstrous psychic space, and it will inhabit a part of yours for years to come.

“Seven Minute Mind” – The Bad Plus

The Bad Plus eat lesser jazz trios for breakfast. Ethan Iverson’s virtuosic piano playing sounds like what Oscar Peterson would have played if he tripped acid while writing math equations. Drummer Dave King alternates between funk grooves, and full on free-jazz freakouts without ever overstepping the bounds of taste.

“What Are We Waiting On?” – Woody Guthrie

Woody Guthrie is the patron saint of Okie musicians and a true patriot. A radical leftist who despised the rich and came from nothing, he became the populist voice of the Greatest Generation. This song proves as much a call to arms now, as it was in its day. The Fascists are still here and it’s still the duty of good Americans to stand up and resist.

To Pimp a Butterfly is a modern masterpiece. Using heavy-hitters like Thundercat and Robert Glasper, Kendrick drops bomb after bomb of socio-political commentary. A sprawling epic featuring the ghost of Tupac, and the embodiment of an angel named Lucy, Kendrick annihilates those who say modern rap isn’t true art.

“When I Was Done Dying” – Dan Deacon

Everyone fears what happens after we die and this song beautifully incapsulates the idea of a consciousness that continues into something bigger and far more magnificent than what we can comprehend within the confines of our space and time. I was introduced to this song by a dear friend in Denver who told me I’d never be the same after watching the music video and he was right. It still makes me emotional every time I see it.

I’m in love with every Hiatus Kaiyote song because they never stick to one form or one time signature. Each section is unique and you never quite know where the song will take you. Hiatus Kaiyote has been a huge influence on our band from the very beginning for that reason. Their sound is very eclectic and you can tell each band member has their own musical influence going into their music. They don’t fit into one specific genre because they created their own genre. Their vocalist and lead guitarist, Nai Palm, is such an inspiration to me. She’s a siren that lulls you into a trance that you never want to break out of.

“There’s No Home For You Here” – The White Stripes

I would listen to this song full blast in my hot pink bedroom in 5th grade while playing the air guitar and thrashing on the floor. The White Stripes were so influential to me as a young girl. I had never heard anything so powerful like the wailing screams of Jack White’s guitar solos. I was in love from the very beginning and I’ll always have a soft spot for his music because he fueled the rock and roll fire in me.

“Come On! Feel the Illinoise! (Part I: The World’s Colombian Exposition- Part II: Carl Sandburg Visits Me in a Dream)” – Sufjan Stevens

The lyrics in this song question our progression as a society and if we have lost our sense of artistry with the rise of consumerism. In the second part of the song, the great American poet Carl Sandburg comes to Sufjan in a dream and tells him to write from his heart. I love the 5/4 feel that hits you at the beginning. I could listen to any Sufjan song and appreciate something different about it each time. I love how he treats each of his songs like classical compositions.

“Diamonds on the Soles of Her Shoes” – Paul Simon

It was difficult to pick one song off this album, but I feel this song exemplifies best the direction of Graceland. Featuring the lush vocals of Ladysmith Black Mambazo and an intense rhythmic bass line that pulls the song forward. An amazing track from one of my favorite albums.

I first heard this song when I was beginning to write music and it has stuck with me ever since. The way the band arranged the song, through movement and dynamics, coupled with the relentlessly cynical lyrics were eye opening for me as a young musician.

This song’s constant build and lyrical storytelling make it a masterpiece. It is the perfect example of Animal Collective’s use of sounds and textures that make them such a fascinating listen.

“Two Doves” – Dirty Projectors
I recently came across this song, and I instantly fell in love with it. The Dirty Projectors are such an inspiration to me due to their two female singers and their incredible harmonies. This song, however, is more intimate. It features only one singer accompanied by acoustic guitar. The lyrics to this song are so pure and beautiful. It really inspires me to be a better songwriter and to experiment with vocal melodies. I could honestly listen to it all day. Such a beautiful song. If you haven’t listened to the Dirty Projectors go and listen right now.

“Airplane” – Local Natives
This song has been important to me for many, many years now. As Kelsey Ayers wrote this song about his grandfather passing away before he really got to know him, for me, this song has been interpreted about different people throughout my life. The lyrics, meaning, power, and passion put into this song is what really makes me feel and understand it. The Local Natives are definitely one of my favorite bands and put on such a great show. I really dig everything that they’re about, and they somehow keep getting better and better the more material they put out.

“When I Get My Hands On You” – The New Basement Tapes
Performed by Marcus Mumford, this Bob Dylan song is one of my favorite songs right now. If you’re a huge Bob Dylan fan like myself, when listening to this song, you can tell it’s his writing. It’s just such simple, yet beautiful and meaningful writing. And Marcus Mumford being one of my all time favorite artists, this song is nearly perfect. And it’s interesting too because you can tell the production and music is something that neither Mumford or Dylan would have chosen, but it fits both the singer and the lyrics perfectly.

“Unbelievers” – Vampire Weekend
I choose this song because it’s incredible but honestly I had a really hard time choosing a Vampire Weekend album, much less just one song. I probably listen to this album at least twice a week every week. It’s such a great album from start to finish. Their use of time signatures, musical elements, production, instrumentation, and vocal melodies are so perfect. I mean let’s just take a second to appreciate Ezra Koenig’s vocal melodies, he is such an amazing artist. Vampire Weekend is one of my all time favorite bands.


Tags: The So Help Me's, Tracklisted