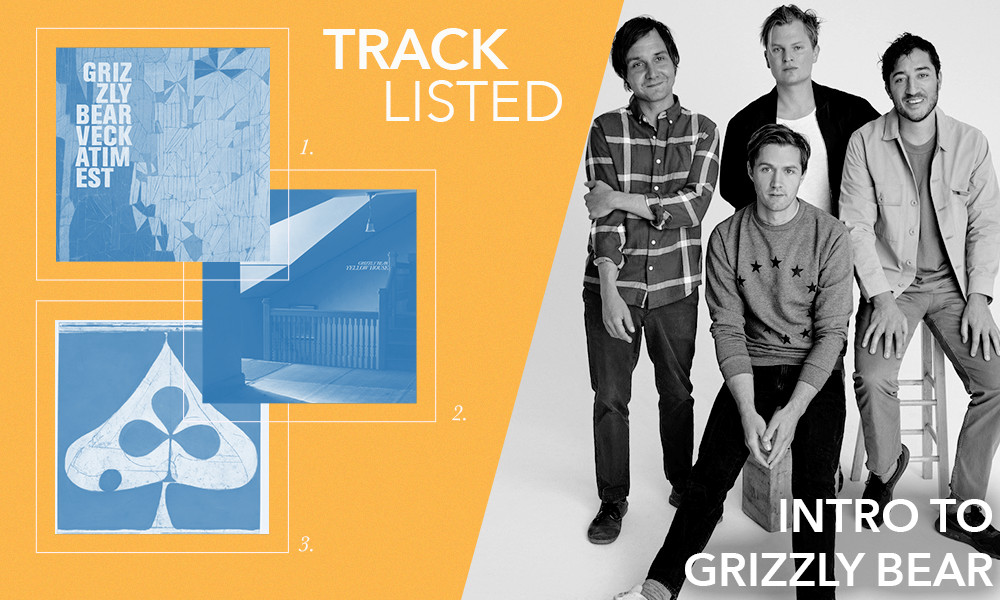 Much like the classic mixtape, Tracklisted presents a collection of songs under a selected theme, which you can check out below. This week’s playlist functions as an introduction to indie folk sensations Grizzly Bear.

Brooklyn-based Grizzly Bear emerged out of the explosion of indie rock in the mid-to-late 2000s, their twist and crack of folk and neo-psychedelia giving their music a refreshing intricacy unlike most of their peers. Their productions have since become more daring and sophisticated, complimenting the nature of their artful lyrics and ensuring their place among artists who you could forever live with on a deserted island.

Though their latest record, Painted Ruins, is their first on a major label, they haven’t lost any of their strive for deeper understandings and reflections on human dynamics. The songs have certainly gotten bigger and bolder, perhaps to the detriment of the band’s first fans who appreciated their subtler sounds, but Grizzly Bear stand tall in the sea of their major contemporaries who also released offerings this year. In celebrating the record’s release (their first in five years), I’ve compiled a playlist for those who might not be too familiar with the history, featuring their biggest singles, deep cuts, and more.

This is your introduction to Grizzly Bear.

This is the opener to their 2009 breakthrough record Veckatimest and the opener to this playlist because really, we should start you off with the band at its finest. A baroque play of freak-folk featuring woodsy reverb and an interesting structure, this is a track you have to play over and over again just to catch every little detail. Their performances — as mysterious as they can usually be — match the tenacity in a way that feels most welcome, with Daniel Rossen powering through his vocals and guitar in an almost intimidating fashion. It should feel like Grizzly Bear is just fitting the glove and going at it, but this is a wild experiment that pays off.

This is arguably the most gorgeous single in their collection, probably because, when broken down, it’s a shattering piano ballad. It’s obviously much more instrumentally expansive than that, but it similarly swoons and sweeps. Their harmonies feel lived in, the melody is sweet, and the combination of brass and strings is completely nailed. The wackadoo, Paranoid Android-esque ending just helps enhance the narrative and caps off a great tune.

Likely the track you’ve heard in commercials; “Two Weeks” is the hit bringing them into the spotlight. It’s easy to hear why: the catchy piano intro breaks away to even catchier vocal harmony “Ohs” by the band, leading into a smooth and easy beat of rolling drums and big horns. The way Grizzly Bear seesaw the melody between high and low registers is where its genius lies, bringing this folk pop track an edge over similar fare.

Yellow House is the second record in the band’s discography and the one that really captured the direction of where they eventually headed in the late 2000s. “Knife” showcases just how cryptic the band could be while also being harmonious and simple. The lyrics contain maybe a couple dozen words that are very direct, but their panning production and vacant textures — pianos and percussion and extraterrestrial sounds — gives the track an imposing presence you have to weave through to get to its core. It expands upon their earliest output (more on that later) while exploring the flourishes that would make them indie heavyweights.

This is a brand new single from Painted Ruins. I’ve included it here mostly for the sake of giving you a slice of what to look forward to, but of the four tracks released before the full LP, this is probably my favorite. It’s the most “Grizzly Bear” of the album. That’s not to suggest I like it for familiarity, but “Neighbors” is a really strong performance, meticulous in its execution of slow-burn sonics, while almost turning into a completely different song at the half. It’s continually interesting on each listen — as any Grizzly Bear track should be.

On a Neck, On a Spit

This is the most folksy Grizzly Bear gets and the most prog. At points it’s wonderfully harmonized and makes you melt, but then it takes a steep turn into an entirely new and epic movement, loudly pounding its chest at its largeness. Perhaps that’s the point, given the song technically has two titles.

This was a track initially featured on the band’s Friend EP as a home recording, but it was re-recorded for the widely popular Hot Red Compilation Dark Was The Night in 2009. This is, in this writer’s opinion, the superior track. It still retains the campfire-side quality of the initial recording even though everything — everything — sounds expanded and cinematic, with Rossen’s vocals a lot more full and less rushed.

Though Shields isn’t necessarily the band’s best record, it does contain a couple of the band’s masterpieces, including “gun-shy.” Nearly folk R&B, this is a beautiful experiment of sorts for the band, who slow everything down to lava-lamp level, having you soak in some gleaming rhythm to the point of psychedelia. Ed Droste’s vocals soothe as his lyrics walk a delicate balance between reality and the heavens, inflating the experience. It’s the most unlikely track they’ve produced thus far.

While You Wait For The Others

Like “Two Weeks,” this single from Veckatimest instantly clicks. It rides breezily by on a steady bpm as the musicianship speaks for itself, the band’s harmonies in full effect while their performances flow evenly. Their guitar parts evoke something almost straight out of ’50s rock and roll, while every other detail in the production feels of other eras straight through to the 2000s. It’s an engrossingly large-sounding track on an album that is otherwise a more introverted affair.

This could be considered a “deep cut” from Yellow House that really displays the magnitude of their simplicity. A track about separation and distance feels so much like it, utilizing a Western-esque bob that really enables their vocals to soar alongside the growing instrumentals, growing almost to the point of self-destruction. It’s an achingly gorgeous track that serves thematic purpose on an album whose singular themes outweigh the overall.

This is the only track I’m including from their debut album Horn of Plenty. While the album is mostly comprised of sonic experiments from Ed Droste, “Don’t Ask” bears (no pun intended) the resemblance of a song, and a great one. It’s the first real showcase of Ed’s collected vocals and guitar, in the style of a home recording, with tones reflective of something like early Shins material. It urges to sound bigger than it is but it retains its intimacy — something that would be further explored down the road.

As is the case with their openers, Grizzly Bear absolutely nail their closers, and “Foreground” is the ultimate closer. The two-note piano keys act as our nostalgic through-line to a bitter memory the song wants us to linger with, expanding and constricting its instrumentation as if its a naturally breathing thing. It lives in the moment you listen to it, elegiacally pacing itself so that it remains with you as it stops. It’s the work of expert songwriting and profundity, the type that makes a band legendary as you hold it still close to your heart.