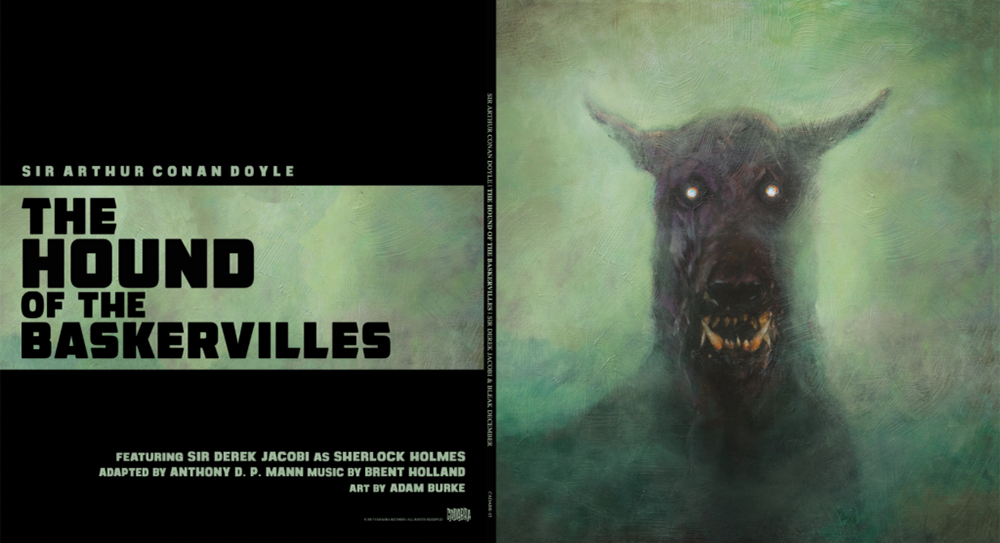 A new spin on a classic tale

In a relatively short amount of time, Cadabra Records has perfected their business model; spooky tales on ornately colored vinyl, narrated by talented voice actors, and scored by experimental acts such as Theologian and Maurizio Guarini. Judging by their rabid collector base and critical acclaim, it’s a winning formula that should sustain them for years to come.

With the addition of Arthur Conan Doyle’s The Hound of the Baskervilles, Cadabra continue down their path of more mainstream releases with greater crossover appeal. This adaptation of the well-loved novel is performed by a full cast of actors, most notably Emmy-winning Sir Derek Jacobi playing the role of quick-witted Sherlock Holmes. Also returning are veteran Cadabra actors Anthony D.P. Mann and Nikolas Yuen, both featured on the previous Dracula adaptation.

While the story itself is fantastic (and I strongly urge everyone to read it), the actors add a depth that not only complements but often elevates the sense of dread found on the page. The scenes in the moor are particular spooky, with the reverberated howling of the hound echoing from left to right across the soundstage. Headphones allow the audio effects to truly shine, whether it’s the hollow clunk of footsteps through the room or the slow flicker of a well-stoked fireplace.

Brent Hollands’ score is also terrific, drawing from the lush orchestral cues of vintage radio plays and classic Hammer films. It’s full of diverse sounds; a bagpipe while they travel through the bog, sliding strings and light piano notes to accent plot, bright horns to compliment the hound’s reverberated growl. It fits perfectly with the story, but would also work just fine on it’s own.

Never one to skimp on the art, Artist Adam Burke and Cadabra chose dark greens and black as the color palette for this release. The cover features the hound staring towards the listener, eyes white like the moon and teeth slightly orange and red. Inside the thick, glossy gatefold are liner notes by Anthony D.P. Mann, as well as a gorgeous landscape of the hound and his victim on the moonlit moor. The vinyl itself is a dark, smoky translucent green, with a black and green center label to complement the wax. Make no mistake, this is a well thought out and executed package.

The Hound of the Baskervilles is available on vinyl at Cadabra Records.