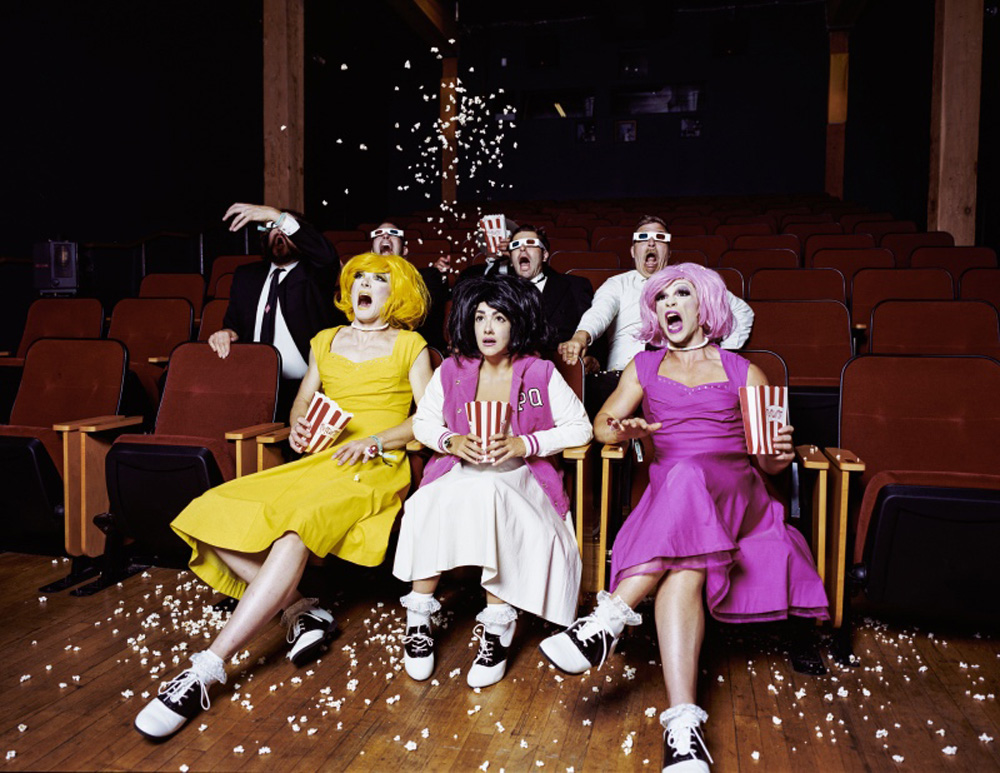 Prom Queen’s upcoming album, Doom-Wop, is a continuation of the sound the Seattle group has honed on their previous two releases. However, per the band, it’s different, and more of an album that “celebrates the ensemble that we’ve built over the last few years.” That camaraderie has been “built from the ground up,” they state, and it really shows. If you’ve enjoyed the darkly mysterious versions of the girl-group sound Prom Queen has explored on Night Sound and Midnight Veil, then you’ll likely adore Doom-Wop, an album to which I’ve returned again and again since it showed up in my inbox a couple of weeks ago.

Here, we premiere one of the album’s highlights, “Blonde.” You can listen to that below, and read our interview with the group’s frontwoman, Leeni Ramadan.

Modern Vinyl: What was your first exposure to girl groups and doo wop?

Leeni Ramadan: I was exposed from an early age and have had a lifelong love for that sound, but it’s a bit of a mystery to me as to why — maybe it seeped in from the womb. My mom had been in a girl-group in high school called “The Seven Slick Chicks.” I don’t think they ever really gigged but maybe did some school functions. My stepdad also really liked “oldies”; he loved the Everly Brothers and almost exclusively listened to AM radio. But from the get-go, I was enamored with Grease and Peggy Sue Got Married, any other movie from that time period that I saw, and just loved the sound of that music for reasons I cannot place.

MV: Why did the music strike you as something worth a modern day exploration?

LR: It didn’t take too much forethought on my part, nor did I have an agenda to modernize the genre in any way. It was really just the music I wanted to make/what I ended up writing. I geek out on the production side of this stuff, so part of it was the challenge for me to produce something that captured the quality of the recordings that I love so much. I am proud of the end result and it was a thrill to hear it on vinyl! This is my first ever album on vinyl so it was a really special moment to listen to that first test press! Fantastic!

MV: It seems like every great ’60s pop icon had a really fantastic duet in their catalog, and Prom Queen’s “I Need You” fits that to a ‘T.’ Why’d you want to work with Same Animal?

LR: I met Joel [Jarek DeGraf] a few years ago, and when he said he was starting a project I was eager to hear it because I had a feeling it would be great. I really loved the recordings he was making and, in particular, his vocal style. I wanted the duet to be with an artist who had the right sound and who was actively creating, so I was so excited when he agreed to record it! He’s down in LA and sent us the vocal takes from his studio.

MV: “Blonde” is a song which really resonates — it has some definite spiritual kinship with Hedwig & the Angry Inch’s “Wig in a Box.” How is hair and dying it, cutting it, shaving it, etc., this metaphor for control?

LR: Well, firstly, Hedwig was huge for me and definitely a major influence. But I’m also really into hair. I toggle between feeling enslaved by beautification rituals and feeling empowered by them. Depending on the day! “Blonde” is a song that is equally as much about self-hatred as it is about the giddiness I sometimes feel about the vast, untapped possibilities of identity shifting. But the song is also about control. The lack of control that I often feel and grasping at the few things that I can control so as to feel less impotent.

MV: Your covers are amazing, but the version of Guns ‘n’ Roses’ “November Rain” which ends “Doom-Wop” is astonishing. I can tell it changed a little from the first cover version, but what exactly did you all go through and alter for the album?

LR: It has morphed a bit throughout the years but the central idea has remained pretty similar. Kind of like how Doc Emmett Brown bumped his head one day and came up with the flux capacitor — the idea of a doo-wop version of “November Rain” came to me back in 2009 and I haven’t been able to get it out of my head ever since.

And, even though there are previous versions, I never felt that I was able to execute it properly until now. And it was cool to be able to license it for the record! The biggest change sonically this time around has been adding sax – making Slash’s solo a sax solo. It’s probably my favorite part of the song!

MV: Prom Queen has funded their last two albums via Kickstarter and GoFundMe. What are the ups and downs of crowd-funding to produce a record?

LR: I am not the biggest fan of crowd funding, so anytime I’ve done it – believe that I’ve done it out of necessity! We jump-started our record with a small fundraiser but right now, even though costs are high because of the release expenses, I have been working all summer to fund the rest out of my pocket. Some people might be confused about that but to me it’s simpler to fund it myself, in a way. Because fundraising is a JOB! And it’s not a job that I particularly enjoy.

That said: I don’t think our last album, Midnight Veil, would have been the same without the Kickstarter community that was built around making a 12 song video-album! That project really took a village and having that village form at the get-go really helped us in production and it aided promotion immensely!

MV: I saw that there are plans to hit the UK in support of ‘Doom-Wop,’ but are there Stateside plans?

We can’t wait to go to the UK! Touring is not something that comes easily so beyond that mini-tour, I have no idea and nothing planned! It’ll probably just be random weekend shows in different cities. If there are any tour booking folks out there looking for a scrappy band of 30-something professionals who would LOVE to tour…please call me. We need help.

Doom-Wop is available as a digital pre-order on Bandcamp, with vinyl following later.