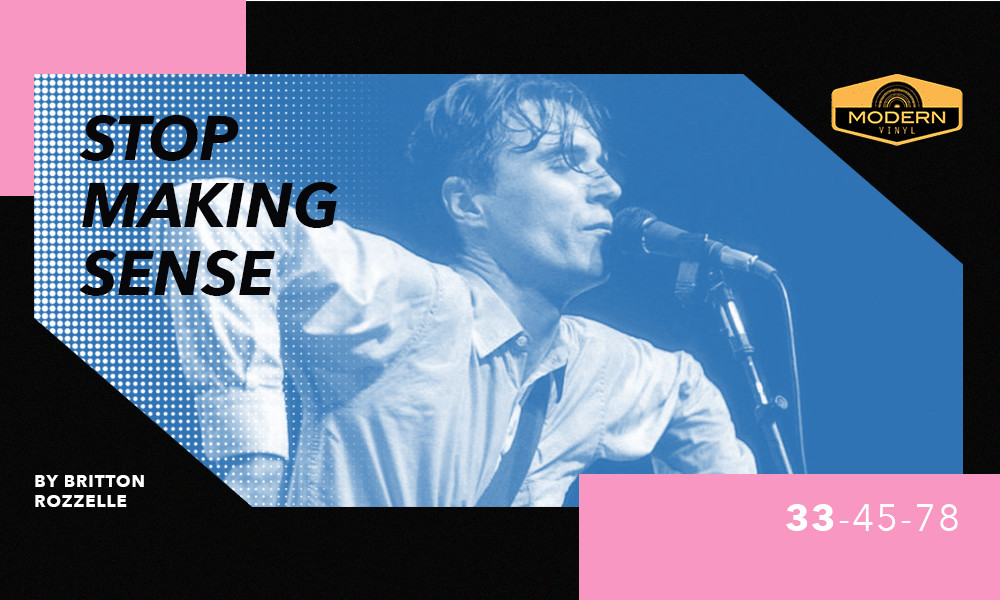 Going through my parents’ CDs as a kid undeniably steered me into music that I listen to and appreciate today. My love of bands like The Smiths and Smashing Pumpkins, to the Sundays and the Cranberries came from finding otherwise nondescript Memorex discs in my childhood home, all stacked up in a grand red-oak cabinet in the living room.

Throughout my early years and into adolescence, there was one red-oak discovery I kept coming back to though. At the time, it was nestled in between Forever Now and So Tonight That I Might See, a normal CD just like the rest, plain silver with the fat stroke of a Sharpie label.

Little did I know, I had been listening to (and rightfully obsessing over) one of the most important soundtracks to, what is still to this day, one of the best concert films of all time.

I had been playing Stop Making Sense, over and over, in my little blue portable CD player, and I couldn’t stop.

“As we get older and stop making sense”

It’s impossible to talk about this album without first discussing the film it comes from. Concert films aren’t anything new, and they certainly weren’t in April 1984, but Stop Making Sense just happened to perfect the formula. The film itself is both well shot and recorded, capturing, almost perfectly, the grandiose production thought up by frontman David Byrne. It set the stage (quite literally) for other films in the genre, those taking advantage of the more intimate views of a concert, featuring shots not just of people, but avatars of excitement and joy — set free by the band’s music. Shots of Byrne and co. interacting with those lucky enough to be in the front row, in plain sight of Camera 1, warm the heart as the drums take that warmth and light a fire with it. LCD Soundsystem’s Shut Up and Play the Hits (2012) and The National’s Mistaken for Strangers (2013) both harbor DNA of this film, cutting in and out of over-the-top performances and with a heavy focus on the band as a character, in the spotlight, for legions of adoring fans. We see close-ups of those lucky, star-struck attendees in bright pink windbreakers swaying to the rhythm. We see pre-professional teens bopping to the beat, and the band returning the favor by displaying so much energy it hardly feels containable. The film, and as a result the album, is defining for the Talking Heads as much as Thriller is defining for Michael Jackson; it’s the distilled essence of the band as musicians and creators.

Stop Making Sense takes us everywhere from the exceedingly bombastic rendition of “Burning Down The House” to the intimate solo performance of “Psycho Killer,” starring Byrne, a tape player, and his signature zany choreography, now immortalized in the annals of music history.

And it all begins with one line…

Stop Making Sense is monumental for several reasons, one of which being the energy and bombast infecting each and every track on the accompanying record. Despite being recorded live over three nights at the Pantages Theater in Hollywood (something that’s really only noticeable while watching the film), the spirit of mastermind Byrne and his increasingly large band never falters. This energy leads to incredible live versions of “This Must Be the Place (Naive Melody)” and “Life During Wartime,” each containing new instrumentation, slightly altered choruses, and a distinct love for the music being performed. The latter especially benefits greatly from added band members, a positively gigantic percussion section, and the perfection that is the vocal duo of Lynn Mabry and Ednah Holt, whose melodies and harmony allow the songs to ascend to never-before-heard heights.

As the album goes on, more and more band members are included, such as co-founders Chris Frantz and Tina Weymouth, with Steve Scales delivering on percussion, and the resonant vocals of Mabry and Holt. Together, they work to make impeccable, often times defining versions of each of these tracks, even taking time to honor Weymouth and Frantz’s Tom Tom Club with a “Genius of Love” performance. Originally hailing from their 1981 self-titled LP, this version is full of new-wave glory and impossibly catchy hooks, layered with the over-the-top vocal styling of Weymouth herself.

Sonically, songs like “What a Day That Was,” and “Take Me to the River,” thrive on rhythm and a high-functioning sense of motion in their studio versions, but live they reach new heights, transforming from great songs into even greater ones. The choruses of “Take Me to the River” blasts through your speakers with the band’s signature rhythmic jaunt as Byrne croons over the soulful magic of Mabry and Holt. The crowd cuts in, clapping in unison as tensions build, leading to an explosive refrain that infects all who listen with smiles. Coupled with the innate magnetism of Byrne’s mannerisms, both physical and vocal, the album weaves its way to perfection by “Slippery People.” The rest just confirms it.