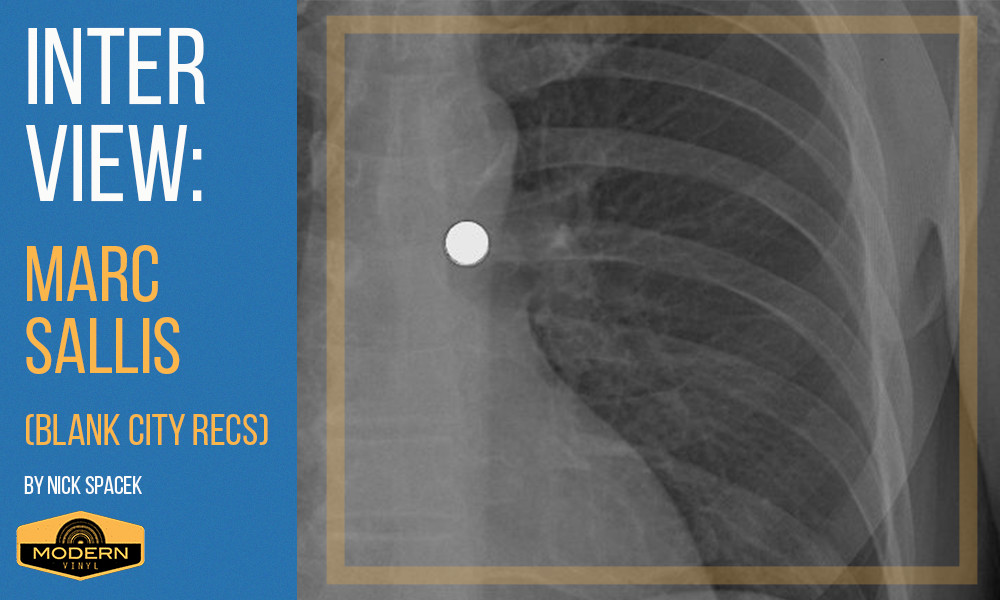 Los Angeles label Blank City Records was formed this year by Marc Sallis, former bassist for the Duke Spirit, and Brandon Burkart, of The Saint James Society. The label specializes in releasing music to flexis made from vintage medical x-rays, à la Russian roentgenizdat bootlegs from the ’50s and ’60s. The Blank City x-ray flexis are playable on standard record players, with the label focusing primarily on developing and releasing music from L.A. artists. The label’s first release was The Saint James Society’s Covered In Blood EP, which sold out in less than 24 hours.

It’s such a fascinating concept, we rang up Sallis in L.A. and talked about how Blank City came to be, and the underlying aesthetic behind it.

Modern Vinyl: What was the impetus behind starting Blank City?

Marc Sallis: One of my cofounders, Brandon [Burkart], we met about four years ago — not long after both of us moved to L.A. We were neighbors in the Echo Park area of Los Angeles, and we were sort of the only long-haired, tattooed people in the area, so we sort of gravitated toward each other and started chatting.

It turned out that he’d just moved here from Texas, and he had something like just eight CDs in his car for the drive from Austin to Los Angeles, and one of them was the Duke Spirit! (laughs) So, it was this weird coincidence straight away. Then, he introduced me to his band, the Saint James Society, and I ended up playing in his band.

We had that project together, and when it came to putting out some new music and playing live again, we thought that we were going to put it out ourselves, which is when the whole label idea came around. About six years prior to that, even, I was the editor of a magazine called Artrocker. It was a music magazine, and a band had done a flexi single with us, and we’d mounted it to the cover and given it out with every issue of the magazine. I thought that it was cool, and [it] reminded me of being a kid back in the ’80s, when I’d discovered music through flexis on magazine covers.

I started looking into the history of flexis, and came across the story of the x-rays and how they’d press music onto x-rays back in the ’50s and ’60s in communist countries where they didn’t have access to pop music or rock music or jazz, or even the ability to press their own music. They found these huge supplies of x-rays that hospitals were having to throw away, and they came upon a way to press music onto those. I thought, “Wouldn’t it be great to start a label like that?”

It just started off as something for ourselves, and it’s grown into something a lot more. We have a full roster for the rest of the year all mapped out.

MV: I know it’s a terribly difficult process to get music onto an x-ray. The Russian ones were lathe-cut, for example.

MS: It really is. What we’re doing is like a standard flexi. With a flexi run, there’s a minimum of 250 that you have to do. What we’re doing is a run of 150 flexis, and incorporating 100 x-rays for every one of these releases. They’re getting pressed in the same way, so the nature of pressing the x-rays is the same process of pressing the flexi, which is all about having a heated press on it.

MV: Is the x-ray something which reflects the musical content therein? Having listened to a few of the artists you have — including the Saint James Society — I noticed a certain darkness to the music.

MS: (laughs) Well, yeah. We love things that are dark, weird, and wonderful, so the fact that we’ve got these pieces of people’s medical history that we’re pressing music onto — we love the macabre. We love that fact. But, for us, it’s more the actual element of the whole flexi and pressing on this medium.

I remember, as a kid, listening to a flexi, and I’m pretty sure it was Culture Club’s “Karma Chameleon” that came free with a copy of this pop magazine called Look In, and I remember literally playing it to death. I don’t know how many plays I got out of it, but I remember my dad turning round and telling me that I had to stop playing it, because it was messing his needle up. They literally degrade to a point where you can’t play them anymore.

In this day and age of Snapchat and things like that, I like the idea of almost having a physical version of Snapchat. You’re only going to get so many plays out of these things, but then you’re still left with this beautiful piece of art, with these x-rays. You’ll still have something physical left, even after you’ve worn the thing out.

We also love the idea that it’s recycling and reusing materials and purposefully giving them a new life: turning these pieces of medical history into a piece of art. We love. Our ethos at the label right now is that we’re signing local bands and trying to keep things as local as possible. In every element of our business, we’re supporting people around us, and trying to be very aware of that ecological point of view, and trying to build a community.

The most recent Blank City release, Pair of Arrows’ “Wall,” is sold out on x-ray, but still available on flexi. Keep an eye on the label’s Facebook page for upcoming releases.