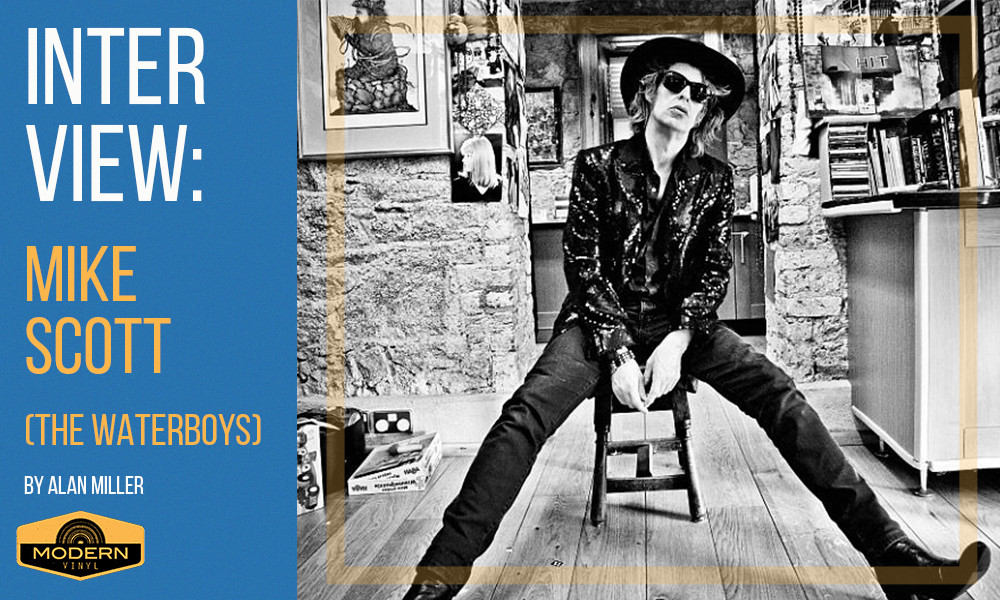 The Waterboys are a prolific Scottish rock band, led by enigmatic frontman and musical chameleon Mike Scott. Founded in the early ‘80s, The Waterboys have been through many twists and turns (they’ve had over 70 members) but at the heart of it all is Scott, the architect and director of their always evolving sound.

Their new album, Out of All This Blue, was released Sept. 8.

Modern Vinyl: Thanks for taking the time Mike. You’ve had quite a career and many great records: I’m curious, for a new listener just discovering The Waterboys, what album do you think they should start with?

Mike Scott: THE NEW ONE, of course. It’s the best and most current. And when checking out the older albums, people should listen to the remasters which include extra tracks, correct unnecessary edits and have better sound.

MV: The overall sound of The Waterboys seems to shift, quite considerably at times, from record to record. Are you ever settled, musically speaking?

MS: I hope not! I grew up listening to artists who evolved with every record, like The Beatles, Dylan, Neil Young and Bowie. In the ’60s and ’70s, that was expected, and rightly so. It’s natural that an artist or band should keep moving, keep exploring.

MV: You’re known to draw from a lot of different sources for inspiration, be it literary or otherwise — who are some of the current artists influencing your work? Anything you’ve read lately that influenced the new record?

MS: Musically, the influences on Out Of All This Blue were Marvin Gaye (Let’s Get It On especially), Curtis Mayfield (Curtis/Roots), King Curtis the great sax player, Motown singles (Temptations, Four Tops, Marvin again, Supremes), Keith Richards, Brian Jones and all the sounds and styles of southern soul. Having Muscle Shoals bassman David Hood in the band for the last two records and our 2014-15 tours was a major inspiration. Likewise Brother Paul, our Memphis-born keyboard player who’s played with Ann Peebles, Al Green, Wilson Pickett, Isaac Hayes and Bobby Rush. These guys bring a whole lot of fabulous to the party. As for reading…for the period of making this record I read only books about music — biographies, histories, criticism. Those informed and inspired me, kept me in a perpetual state of musical fascination.

MV: Working part time at a record shop, I always hear patrons talk about “Fisherman’s Blues: as being one of their favorite albums of the ‘80s. It’s certainly one of my favorites as well, and still sounds quite fresh today. Do you consider it some of your best work? Where would you put it creatively in the Waterboys discography?

MS: YES! I love that one and consider it one of the best we’ve made. That period from ’86-’87 was one of the most creative I’ve experienced, probably the most creative until the period of Out Of All This Blue. But the original album Fisherman’s Blues is too short. I’d lost perspective and was unable to navigate my way through the jungle of music we’d made. It should have been a double or triple album, and for me the 2013 box-set Fisherman’s Box is the real album.

MV: I’d be remiss if I didn’t also mention how much I love “This Is the Sea.” Are you still fond of that album? Any particular songs you’re really proud of from that time period?

MS: Yes, indeed. That period from mid 1984 to mid 1985 was a time of rapid musical fireworks for me, songs coming all the time in new shapes and sounds. I love many of those tracks, especially “The Pan Within,” “Whole Of The Moon” and the title track.  The stuff on CD2 of the 2004 remaster is cool too, especially Beverly Penn and the exploratory instrumentals I cut with Karl Wallinger in his home studio.

MV: We’re pretty big fans of vinyl here as you can imagine; how’s your record collection looking these days? Any favorite gear as far as turntables, amplifiers, etc…?

MV: Moving on to the new record, who are the personnel? Will they be joining you on tour?

MS: The most featured players on the record, apart from me, are David Hood (bass), Brother Paul (keyboards), Steve Wickham (electric and fuzz fiddle) and two Dublin-based soul singers, Jess Kavanagh and Zeenie Summers.  All except David will be touring with us, plus Bart Walker (lead guitarist of The Royal Southern Brotherhood), Aongus Ralston (funky son of a bitch bassman, Dublin), Ralph Salmins (our usual drummer and one of the top 4 or 5 in the UK, a real powerhouse) and Jon Green (second drummer, slinky, swingy cat). A big band, Mad Dogs And Englishman-inspired!

MV: A lot of the tracks on “Out of All This Blue” have a decidedly modern feel, and it sounds like you were really enjoying yourself in the studio — what were the recording sessions like?

MS: One Scottish dude in his funky bright-lit home studio absorbed in songs, beats and sound effects, surprising himself on a nightly basis, occasionally venturing out to a Dublin studio to cut overdubs of organ, bass and backing vocals.

MV: The Waterboys have been described in many different ways throughout your career, like “big music,” “celtic folk-rock,” “sonic rock” — how would you describe your current sound?

MV: Where did the title “Out of All This Blue” come from?

MS: A song of that name which I liked but didn’t get a good enough version to include on the album.  I’ve since re-worked it and it’ll be on the next record.

MV: The track “Nashville, Tennessee” was a fun listen, and seemed equal parts love letter and maybe a mild jeering at the city — what’s your history there?

MS: NO JEERING INVOLVED! I love and dig Nashville. Played there only twice (2001 and 2015), but recorded the last Waterboys album, Modern Blues, there at Sound Emporium Studios. I have my own relationship with the city and many friends there, including of course Brother Paul our keyboard man who invented the phrase, “My soul is in Memphis but my ass is in Nashville,” and about whom I wrote the song.  The third verse should leave no doubt as to the esteem in which I hold the city.  Hell, I even bought my cowboy hat there.

MV: What was the most challenging song to write on the new album?

MS: None was difficult to write. They all flowed in a straightforward, natural way.

MV: “Rokudenashiko” is a beautiful tune with a great organ track, and from what I’ve read it was written about your wife. Were you nervous about playing it for her? Do you let her critique your stuff before putting it to record, or do you keep those two lives separate?

MS: It was recorded before I dated my wife, but after I’d begun to fall in love with her. I played it to her in a Tokyo hotel room on our third date. I played her all the 5 songs on the album that are about her and checked if she was cool with them. I also asked her permission to use the snippet of our conversation at the end of “Didn’t We Walk On Water.”  She’s teaching me how to say “so happy” in Japanese.

MV: Thanks again for taking the time Mike. Where can folks find you on tour? Any other projects on the horizon?

MS: We will tour in Europe this fall and in North America sometime in 2018.  Japan and Australia/NZ too I hope. Other projects…I’m singing two songs from Out Of All This Blue with the Spacebomb Revue in London in 3 weeks. Spacebomb Collective member Trey Pollard did the fantastic string and horn arrangements for 5 songs on the album.  And I’m working on the next Waterboys record, which is 80% done. It’s a continuation of the creative process/flavor that began with Out Of All This Blue.

For more information about Mike Scott and The Waterboys, or to order the new album Out of All This Blue, check out their website or Facebook page.