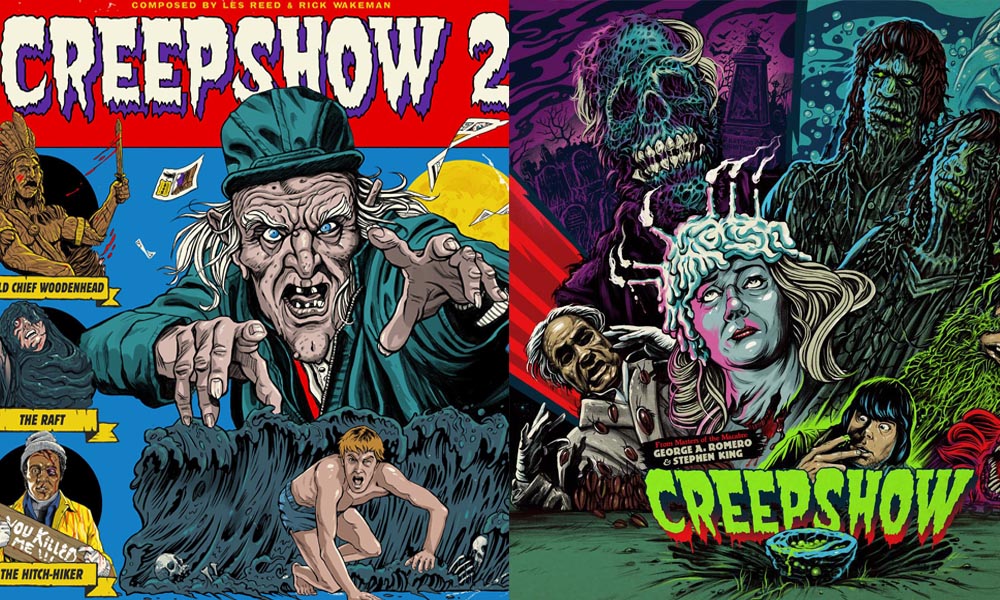 A welcomed repress adds new variants, a disjointed sequel gets its 1st release

It’s no secret this MV writer loves Creepshow. A couple years ago, I raided my personal collection to detail the many faces of Waxwork’s release (don’t worry, I’m down to only 5 copies now after gifting the “birthday cake” version to a friend), and with the new “Lunkhead” and “Kill-Lights” variants, folks finally have another way to purchase John Harrison’s fabulously spooky retro score at a reasonable price. The only question that remains: how does it hold up to the definitive “Creeper” edition?

All this is on display throughout the record, but to get a full idea, you need only to listen to “Prologue/The Creepshow Welcomes You” and “Until Next Time,” the two segments that open and close the record. Harrison masterfully combines all the themes into short, distinct segments, giving the listener an easy gateway into the meat of the record.

The variant I have for review is “Lunkhead,” a gorgeous green record with misty black smoke throughout. The rest of the package in identical to the “Creeper” edition, so check out my previous article for more details. The sound is also identical to the “Creeper” edition, with a very low noise floor, free of pops and clicks. Waxwork seems to have upped their quality control with these new pressings; you can buy the new Creepshow with confidence.

With the exception of one amazing segment (“The Raft”) and a fun wrap-around story, Creepshow 2 works decidedly better as a standalone score than as a compliment to the mostly terrible film. Gone is Jerry Harrison’s subtle work from the original. Instead, we get synth wizard Rick Wakeman’s savant-like keyboard work over veteran composer Les Reed’s orchestration.

The album begins similar in style to the original score with “Welcome To Another Edition of Creepshow.” This time around it goes light on scares, featuring Wakeman playing heavily modulated synth lead over a bouncy synth bass rhythm. The next few segments are fairly gentle, reflecting the country life in the first story, titled “Old Chief Woodenhead.” The harmonica melody and strings harken back to old Hollywood, giving the listener a feeling of melancholy instead of dread.

With the second story (titled “The Raft”), we get our first real hint of terror. The low droning synth pad combined with the higher pitched lead is truly unnerving; Wakeman makes a point to also mix in strange synthetic growling sounds for good measure. The sounds build and build, adding in giant timpanis and detuned chords for added chaos, finally resolving with one giant cymbal crash.

The third story in the film is “The Hitchhiker.” It’s full of blaring horns and bongos, cheesy as hell yet still a lot of fun on the table. This segment is easily the most dated of all the tracks; the hair metal guitar leads and electronic drums just can’t hold any weight compared to the terrifying sound in “The Raft.”

The packaging is top notch, with comic book style artwork by Ghoulish Gary Pullin. The attention to detail on the front cover is truly stunning, featuring a three panel layout on the left side to mimic the old EC comics like “Vault of Horror” and “Tales from the Crypt.” Inside the gatefold is liner notes from composer Les Reed, as well as more beautiful artwork from “The Raft” by Pullin. The vinyl variant I have for review is titled “The Raft” and features a black blob in the middle of the white wax to simulate the oil slick in the film. Sound wise, both sides were clear and free from surface noise or pops and clicks. Every detail of this package matches the theme of the release in striking detail; it’s some of the best I’ve seen from Waxwork (or anyone for that matter).