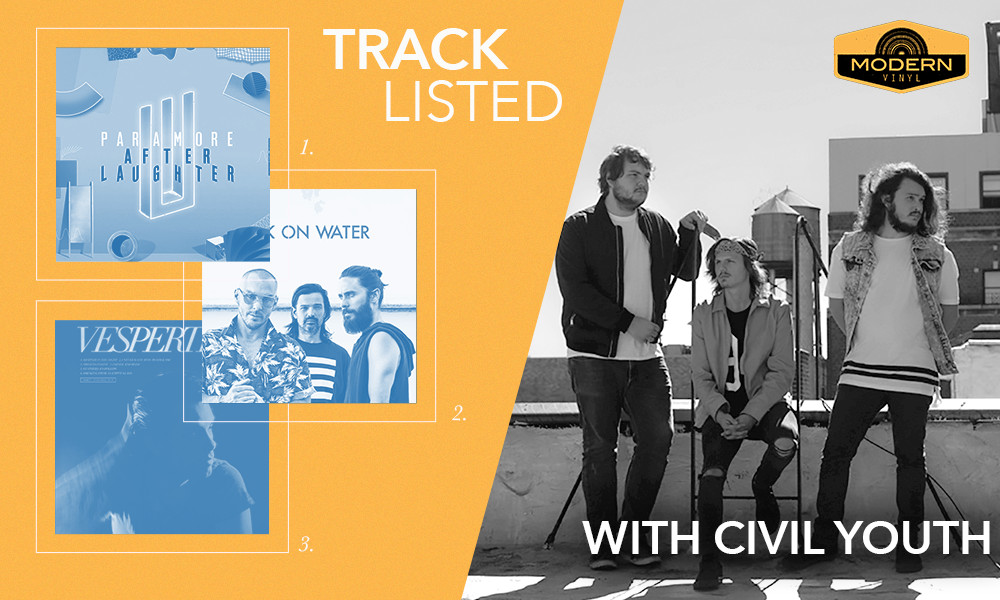 Philadelphia’s rising indie alternative/rock band Civil Youth has been making waves this year with the release of their third full-length album, Conversations, opening for bands like Twenty One Pilots, AWOLNATION, Phantogram, Capital Cities and more. Civil Youth just wrapped up their summer tour, and in the spirit of that, made us a playlist of tour jams, with a bit of a “from the road, to the stage” vibe. The band let us in on what they listen to on the road, before the show, and then after.

We recently discovered this song and have been repping it literally every drive. I think we’re drawn to it so much because the chorus reminds us of post-hardcore vocals, which we love. It’s definitely the song of our summer, and we’re trying everything to tour with these dudes!

Arcane Roots — Off the Floor

NEW ARCANE is DOPE ARCANE. The direction they went with their new stuff honestly reminds us of the direction we’re going, except heavier. Between electronic verses and huge choruses, it’s just nice to see another band have a similar vision as us. Kudos to these guys!

Evan’s favorite song right now. Hayley’s voice has never been so strong. Combine that with the heaviest lyrics she’s ever written and it’s going to create an album you have to at least respect. So diverse and intimate.

This entire tour we’ve been waiting for this record to come out and it finally did as we’re driving home. Listened to the full thing somewhere in Oklahoma. It helped kill the long hours to St. Louis from OKC. Not as impactful as the 1st record, in our opinion, but a much more pop-py side, which we love.

Met these dudes in Nashville and they’re the sickest people and band ever. We went hiking with them and stayed at their place. You need to check this band out for real. They combine U.S. pop with the energy of a punk band from the U.K. That’s why we we’re so drawn to them. Their live show is off the charts.

Mike’s favorite band. Finally put out music and it might have to grow on me a little, but it’s already growing and I love it. We really love the political take they went with for this song. For as much that’s going on in our world, not many artists are taking a stand. To see 30 STM do it is really inspiring.

Throw back Bif. Nuff said. Every single ride, even beyond tour, Biffy will come on somehow and why not throw it back to their 1st album. The way this band performs every single show demands your attention and you even get that on the recorded version of the songs. This band is one of our favorites.

Vesperteen — Shatter in the Night

Played with these dudes in Baltimore last tour and super cool people. Would love to do a tour with them. Don’t ya think…? They have a very unique way of engaging their fans and with their lead singer playing drums in the front of the stage, it makes you curious at the least.

We’re staying at their house right now as we make this playlist… dope people and friends. Not only are they only 18, they’re one of the most driven bands we’ve ever played with. They know what they want and they push every single day.

The Killers — Run For Cover

Why did everyone drop the tour?! We’re listening to this right now and pissed. We’re trying to see them live. It’s been awhile since they put out music and we’re always repping “Mr. Brightside” or some other single. This in particular really grabs you and we’re just upset they’re putting their tour on a hold.

You can find out all sorts of things about Civil Youth over at their website. Grab Conversations, here.