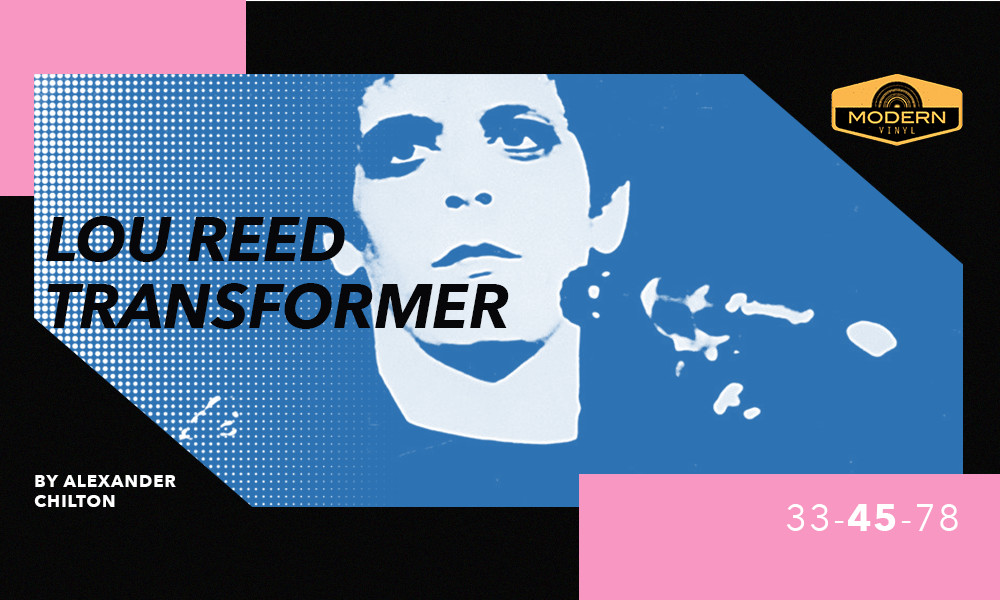 Consistently voted as one of the greatest records of all time by fans and journalists alike, Transformer is regarded nowadays as one of the classic albums of the ‘70s and a shining example of Lou Reed at the peak of his powers. But at the time of its release in 1972, Reed’s career was at a crossroads. He had departed the Velvet Underground just two years earlier and his self-titled debut solo record was a critical and commercial flop. For Reed, Transformer represented his final chance for success as a solo artist, his last chance to avoid working as a typist in his father’s accounting business for the rest of his life.

To resurrect his dwindling musical career, Reed enlisted the help of David Bowie (who had just launched his Ziggy Stardust stage show) and Mick Ronson (the guitarist in Bowie’s touring band, the Spiders from Mars) to produce his second solo outing. Bowie’s glam rock influence can be heard throughout Transformer, but especially on tracks like “Hangin’ Round” and “I’m So Free” which ooze Bowie’s ‘70s swagger. “Vicious” opens the album with an arsenal of trademark glam rock riffs from Ronson’s guitar, a track which also owes a lot to Reed’s old mentor from his Velvet Underground days, Andy Warhol. During an interview with Rolling Stone magazine in 1989, Reed revealed that a conversation with Warhol had inspired the track’s chorus, the article reading: “Why don’t you write a song called ‘Vicious,’ and I said, ‘What kind of vicious?,’ ‘Oh, you know, vicious like I hit you with a flower.’ And I wrote it down literally.”

There’s other influences on Transformer from Reed’s former band, helping him, at the time, rediscover his musical mojo. Four of the songs on the record are recycled Velvet Underground tracks which never found their way on to a studio album before Reed left the band in 1970. “Andy’s Chest” was first recorded by Underground in 1969, but was dismissed as an outtake, while “Satellite of Love” was a demo track from 1970. Reed slowed the tempo of these two songs down for their inclusion on Transformer and in doing so unlocked their charm and appeal. Equally, “New York Telephone Conversation” and the record’s final track, “Goodnight Ladies,” both started off their lives on Velvet Underground setlists during performances in New York during the summer of 1970, but were never recorded in a studio by the band.

Transformer gave Reed his first hit single with “Walk on the Wild Side” becoming an overnight international success, reaching number 16 on the Billboard chart in the U.S. and number 10 in the U.K. singles chart in November 1972. The track provided the foundation for Reed’s successful solo career over the next four decades and can be considered a musical masterpiece in its own right. The track’s twin interlocking bass lines coupled with its catchy ”Doot, di-doot, di-doot…”  singalong chorus cut straight through the taboo topics covered in Reed’s lyrics to ensure it was still a commercial contender. “Perfect Day,” released as a double A-side with “Walk on the Wild Side,” is another track on Transformer which ensured that Reed was here to stay as a solo act. Whilst the track was overshadowed by the success of “Walk” at the time, “Perfect Day” received a major boost in popularity during the mid ‘90s when it was featured on the soundtrack to the 1996 film Trainspotting and released as a charity single in the U.K. in 1997, reaching number one for three weeks.

Reed’s choice of artwork for Transformer also demonstrated his return to creative form. An accidentally over-exposed image of Reed playing guitar, taken by the famous photographer Mick Rock, gave the record a striking cover which is now regarded as one of the most iconic LP sleeves of all time. Compared to the cover of Reed’s self-titled debut solo record, a strange cartoon-like drawing by Reed of a bird stood next to a Fabergé egg waiting for a wave to crash into them both, Transformer demonstrated a huge creative leap forward. The back cover of the record also features some interesting artwork, with a risqué photograph of Reed’s friend Ernie Thormahlen included, a banana stuffed down the front of his tight jeans, an image which would have been considered very controversial at the time. Once again Reed was pushing the boundaries, and he had done so successfully with the Velvet Underground during the ‘60s by pairing his music with visual imagery.

Today, 45 years on from its release, Transformer is often heralded as a classic record and a pillar of rock and roll history, but the pressure that Reed was under in 1972 to get his musical career back on track should not be underestimated or forgotten. On Transformer, Reed hit back at his critics with real style and vigour, and the fact that it could easily have been his last ever record as a musician makes it even more remarkable.