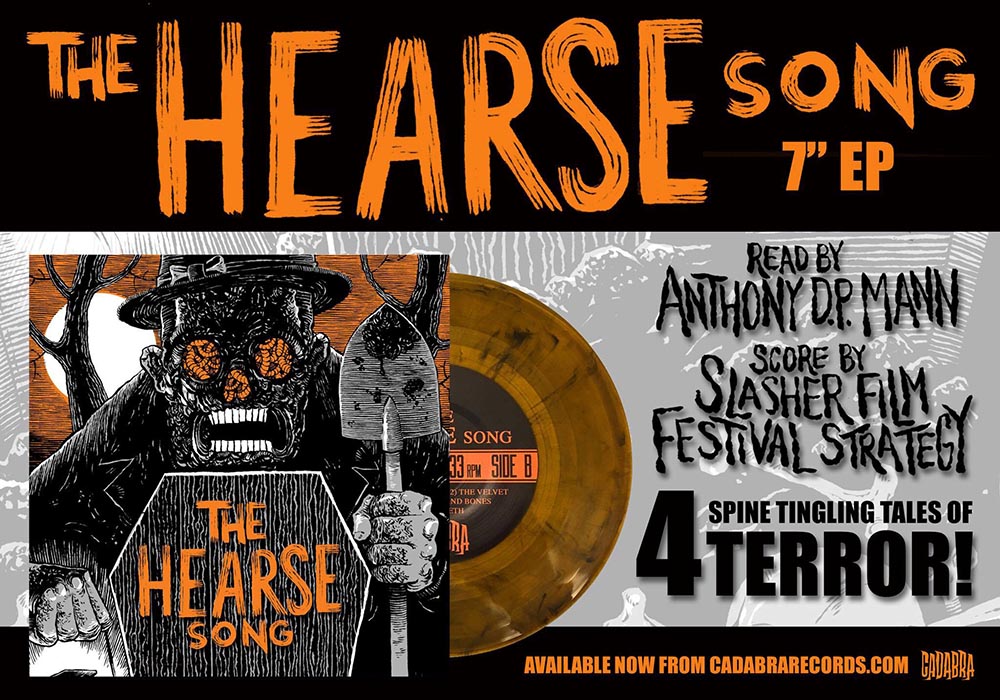 Spoken-arts label Cadabra Records are getting into the Halloween spirit with their latest release, a spooky 7″ titled The Hearse Song on amber swirled vinyl. Featuring music by Slasher Film Festival Strategy and readings by Anthony D.P. Mann, The Hearse Song is housed in a beautiful fold-over die cut sleeve with a festive black and orange motif. It’s limited to 500 so if you’re interested then don’t sleep on it. Here’s some more info from Cadabra:

The first installment of Cadabra Records Presents: Halloween leads with “The Hearse Song,” the common, creepy poem which widely remembered by the lines, “the worms crawl in, the worms crawl out, the worms play pinochle on your snout.” The A-side also features a suspenseful rendition of the popular haunting story, “The Velvet Ribbon.” The B-side of the record packs two more well-known childhood tales of horror, leading with the succinct but bold tale of the old lady in “Skin And Bones,” followed by the more extensive and suspenseful version of “The Teeth.”

The Hearse Song 7” flows with a creepy, diverse score by long-running horror/sci-fi film outfit SLASHER FILM FESTIVAL STRATEGY, who has unleashed a plethora of albums and various other recordings on labels like Foreign, Sounds Children Of The Night, and others since the late 1990s. The EP marks the first collaborations with the artist for Cadabra Records. The four movements are recited by returning Cadabra reader, Anthony D.P. Mann, a Canadian-based filmmaker and actor with five feature films and a lifetime of stage and radio to his credit. In roles ranging from Count Dracula and the Phantom of the Opera, to Ebenezer Scrooge.

The Hearse Song will see release this Friday the 13th of October, delivered in an edition of 500 copies on colored vinyl with a foldover die-cut sleeve

The Hearse Song is available right now at Cadabra Records.