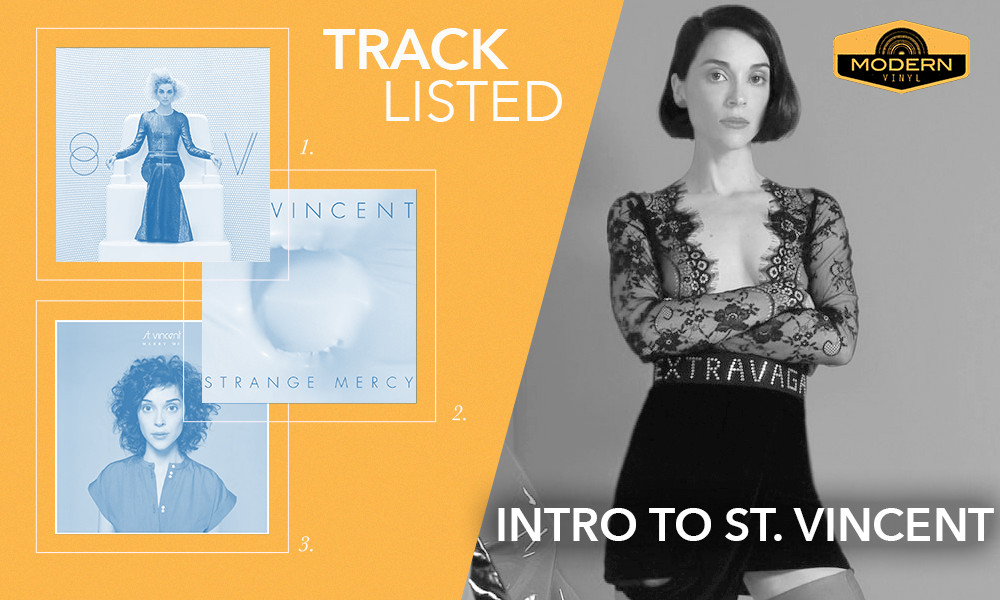 Much like the classic mixtape, Tracklisted presents a collection of songs under a selected theme, which you can check out below. This week’s playlist functions as an introduction to eccentric indie artist St. Vincent.

Annie Clark, aka St. Vincent, has just released her fifth studio album, Masseduction. With help from Bleachers frontman and producer Jack Antonoff, it’s sure to reach a wider audience that her previous records, though admittedly, it’s always felt like she’s exceeded expectations and delivered breakthrough records upon each release. Masseduction may be no different in that regard. What might be different (like her idol David Bowie) is the aesthetic; the recording technique; the persona. With each record, St. Vincent fully transforms into something else, more daring and dastardly, elaborate and intertwining.

It’s hard, then, to really break apart her records and create an entirely new mix of songs that meld her multiple styles into one playlist. It might have been easy to just start from the beginning of her discography and lead up to her latest release, traversing her history chronologically. But nah, scratch that. This playlist I’ve curated will do the job of wrangling and then rallying her electricity, working like movements as if to create an entirely new persona altogether. That, I think, might be the best way to approach her music from a newcomer’s perspective, diving into the St. Vincent of now and understanding that things are ever-changing.

This is your introduction to St. Vincent.

“Black Rainbow,” though smack in the center of 2009’s Actor, is the perfect way to kick off the playlist, with its gradual swell from a fluttery string and keyboard construction, to a destructive and ferocious ensemble of distortion as it climbs the octave scales, her lyrics about a house from which she wants to escape ultimately giving way to the enormity. It acts as an entry into St. Vincent’s metamorphosis into whatever she’s become next, and it allows you to hear just how jaw-droppingly gorgeous this album must have been when it was released. It still is, in fact, featuring instrumentation of all different timbres and Annie perhaps at her most lyrically twisted.

“Oh what an ordinary day/Take out the garbage, masturbate.” The first single from 2014’s high-watermark self-titled record immediately follows her escape from that house and then…it’s totally lame. She enters a world, particularly America, that is rich off reality-show antics and a familiarity with an all-show-and-not-tell mentality (and this was before the 2016 election). The robotic nature of the track is most impressive, with its panning distortion of the instrumentation and the staccato structure of its notes. This indie gem is a St. Vincent banger and her finest hour (or three minutes, whatever), placing concept directly into her music and lyrics for a revitalizing tune, which ends nowhere near where it started — a psychedelic jam you ironically don’t want to end.

2011’s Strange Mercy does an excellent job of deftly navigating Clark’s black humor with a penchant to be zesty and full of life — things that could hardly describe her lyrics. There’s something to be said about making a pop song out of minor keys, and “Cruel” does it in spades, in which she accentuates the scales with layered instrumentation and then blossoms out of by track’s end. The idea that the knowledge and cynicism opens wider as one ages is something St. Vincent toys with and masterfully replicates through her musical composition.

A sophomore album that completely expands on its predecessor and then some, Actor remains Clark’s most impressive record, perhaps for being quite the aesthetic leap, while featuring a more acoustic air and simultaneously sounding alien and mentally chilly with its moments of electronic furor and musical freakouts. “The Strangers” leads the album off with St. Vincent brewing shade to a potential lover over what sounds like a journey through a dream. Maybe it is Annie’s dream to feel the need to intellectually “get back” at this person, in a sense, acting out (tying in with the album’s theme) in more sophisticated ways that would be better spent than lulling about through a nightmare.

In almost an alternative perspective from the previous song, “Who” is an appropriately weird love song between two admirers of each other’s work, and it lyrically continues St. Vincent’s almost satirical look at the banal parts of relationships. It sounded like it was just a matter of time before David Byrne and St. Vincent would collaborate, as both artists’ approaches to the music are equally eccentric. Their album Love This Giant is surprisingly not as fruitful as you would hope, but the single “Who” knocks it out of the park, full of brass and a buoyancy that’s a nice exhibition of their musical qualities.

This one-off single from none other than the Twilight Saga: Breaking Dawn Part 2 soundtrack is, in some sense, lyrically tied to the film’s story of one woman’s empowerment over a ridiculous love-torn war between vampires and wolves, but the real meat of this song lies with Annie herself, as she continues to convey the level-headed and therefore dominant aspect of a broken relationship. She manages to make a song for a movie that still sounds resoundingly in her wheelhouse, even though “The Antidote” is plucky and easily St. Vincent’s most straight-forward song in her discography.

Another pinnacle of her songwriting prowess, “Neutered Fruit” from Strange Mercy has St. Vincent poetically magnifying and analyzing the concept of nature. The image of staring at a rabbit and it not wavering attention by running away (as animals often do) is stark when considering it relays the notion that it similarly applies to her view on the nature of relationships and human nature itself. The song is stunning in its growth from heavenly and quiet choir to amplified and lifted sustain, a build-up of religious proportions — again, a pointed and sardonic nod from Annie for tying in concept with composition.

“Marrow” is another standout in an album of pure standouts. The Actor track is an impressive balance of harmony and cacophony, beauty and ugly. Annie here connects the very foundations of our bodies with internal struggle and then, in dreamlike fashion, thinks of references for The Wizard of Oz and Pinocchio to tie together the idea of scrubbing the struggles away and cutting the strings. She spells out “H-E-L-P” over jagged guitars, fluttering strings and sharp percussion, as if trying to escape from a sunken place, in which there’s no way to tell, given the song’s abrupt ending, if she ever makes it out alive.

Just saying, this is my favorite song of hers. Continuing the concept of the body as a metaphor for being broken, “Surgeon” isn’t any less dramatic and maybe even more-so, pitting Annie in a depressed position, but also in the same position one is when they’re prepped for surgery. It’s eye-opening and weird when she says the chorus, “Best, finest surgeon/Come cut me open” — a line directly out of Marylin Monroe’s journal — because there’s a harrowing aspect of what one might expect to find inside. The way that Annie composes the song is equally sterile and eerie, sporting a synth pad background and soft vocals as if the listener were under anesthesia, unloading the noxious drug with looser and bassier instrumentation that ends in a funkified psychedelia that Welcome To The Machine-era Pink Floyd would be proud of. This is just a masterclass of songwriting that places St. Vincent well above the rest in this generation.

The only song on this playlist to feature on her debut record, Marry Me, the body continues to be a source of inspiration, but this is of a cosmic kind, where Annie’s assemblage of the concept comes down to the atomic level. The use of strings and organ against an acoustic and roomy set give the song a purposely prophetic vibe — Annie, the purveyor of time, her words on what will happen when one’s harsh actions repeated ad-nauseam are to be heeded. Even though the song contains a slight bend in the direction of being whimsical, there’s enough edge in her vocals to contain her double-meanings and calls of lunacy.

The last track off her self-titled album is of course fitting of the album’s themes of technology replacing real emotions, but as any of St. Vincent’s best tracks do, they serve as their own commentary for her feelings on relationships in general. “Severed Crossed Fingers” sounds hopeful and is Abbey Road-esque in its execution, but there’s a lingering feeling from Clark that she’s tired and worn. With tired and worn, though, comes experienced and storied, and she imparts it on you (or us) that she’s done all she could before having to succumb to fate. It’s commentary on age and wisdom in a weird time of smartphones and relationships met over right-swipes, and it’s juxtaposed to poignant effect with her composition.

Laughing With A Mouth Of Blood

Last, but not least, we’ll end the playlist on the centerpiece track from Actor that really broke her into the spotlight. And having ended a storyline with this mixtape of sorts, “Laughing With A Mouth Of Blood” plays as an epilogue. Annie skillfully utilizes a call and response format to hear how others might be responding to her previously-said lyric, and it in turn plays out compositionally as she debates between nostalgia and the future, which we now know to be pretty flourishing. Its mixture of heady space electronics and percussive beat makes it the perfect indie rock record for the person who feels lost and scatterbrained. St. Vincent understands, and she’ll do the best to console you, but life is ultimately yours to take.