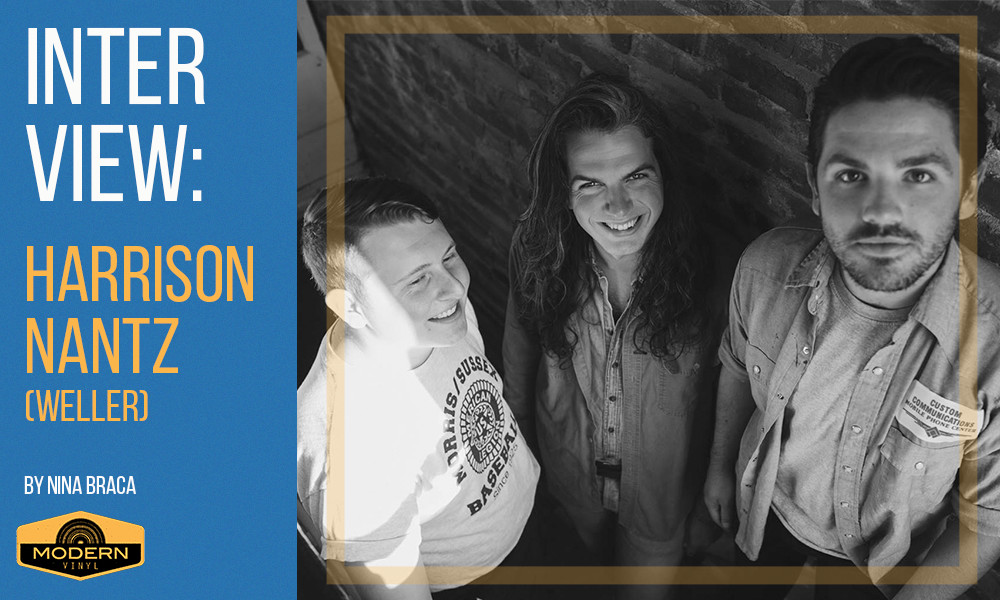 Philadelphia’s very own Weller has finally released their debut full-length, which you can stream below. Weller is compiled of singer-songwriter Harrison Nantz, bassist Evan Clark Moorehead and drummer Jeremy Berkin. Their self-titled is a follow-up to their 2016 split with Rue and early 2016 EP, Career Fair.

The debut perfectly marries self-deprecating lyrics over upbeat and poppy soundscapes, sounding like a soundtrack to a sunny day driving sequence in a coming-of-age movie from the late ‘90s. The riffs are truly infectious, paired with painfully relatable lyrics to create a perfect album for anyone who is feeling “stuck” recently. And let’s be honest — that’s most of us. You can’t help but feel emotionally attached to the lines, “Snap my fingers/break my arms and all my bones, help me build them back up to the person that I was,” off “Answer Anything,” since we’ve all been there — wanting to start over fresh and new. We just don’t know how.

Even on your first listen, you might get a feeling of nostalgia for something you’ve never quite experienced. It’s hard to describe, but Harrison does a pretty good job of making us feel less alone in our lostness, helping us realize that it’s okay to be “stuck” sometimes. Check out what he had to say below:

MV: The whole album seems to follow the trend of “sad lyrics over upbeat riffs” that’s been popping up recently. Do you find it cathartic to open up in this way, or is it scary to be super vulnerable?

Harrison Nantz: I think it’s definitely scary to open up about sensitive topics on such a public platform, but since I was a kid I’ve always used music and songwriting to process the good, bad, and mediocre in my life. Melody plays such a role in my expression through music that even when the subject matter is a bit gritty, my focus remains on a positive melody to balance it all out. It really takes the fear and vulnerability away from both the performer and the audience when everyone is dancing around and responding to upbeat music. Recording and releasing this LP has been the most rewarding process and I’m ready for everyone to hear it!

MV: What has been the hardest part of the whole album writing process? Best part?

HN: The hardest part was finding the time to prepare with Jeremy and Evan! This record has been a work in progress for over a year during which Jeremy lived in NYC, I worked in Connecticut, and Evan worked in PA. As a result, most of this record was written on my first acoustic Fender 3/4 size guitar at my mom’s house in CT which was actually very inspiring. The best part was coming into the studio to flesh them out with Jake, who played a pivotal role in structuring and finishing these songs. The *best* best part is releasing it!

MV: You guys have been touring for a while to promote your EP and last year’s split, but your first full-length album is just now being released. Are you excited to have that music out there in the world? Nervous? 100% terrified?

HN: As I respond to this interview I am waiting for our ninth mechanic to fix the van in Portland, OR, so I am VERY excited to have this music out there in the world! We worked really hard on this full U.S. tour and this record, so to release it after all the trouble we’ve had on the road makes me even more grateful for all the wonderful people we have in our lives supporting us.

MV: You state your influences as Death Cab For Cutie and Radiator Hospital; how did they inspire this album?

HN: So to answer simply, I’d say I listened to The Photo Album hundreds of times while writing this record. I’m not saying it’s all I listened to, but that record flows so well and sits so nice on the earlier side of DCFC’s discography that it pushed me through phases of writer’s block. Radiator Hospital, on the other hand, influenced a lot of the energy you hear on the record, especially the shorter/punchier tracks like “Think Tank” and “Calibrate.” Perhaps most importantly, I must acknowledge the way Counting Crows heavily boosted our morale in the studio and on this tour.

HN: We’ve been really enjoying “Answer Anything: on this tour since it challenges us as a three piece to stay as dynamic as possible. However, closing each night with “Point of Personal Privilege” lets us blow out the room with a heavier sound than usual and we love leaning into it.

MV: How has your tour been so far (besides your van breakdowns)?

HN: Tour has been better than we could have ever expected (minus van problems, yes). Our first west coast shows blew us away, and hearing some people singing along to the singles and EPs thousands of miles from Philly was extremely special for all of us. It really makes it all worth it!

MV: What are some other releases that you guys have been into this year?

MV: Where are you going from here?

HN: Excited to finish up this tour and work on pressing physicals for the record. We have some fun local shows planned for the winter, and because we enjoy drama, we’ll likely be back on the road for a week or two in January. Of course, I’ll continue writing for LP2, as well!

MV: Please explain which Pokemon each of you are. Just curious:

You can grab the full length album, here. We’ll let you know when a physical edition is up for pre-order.