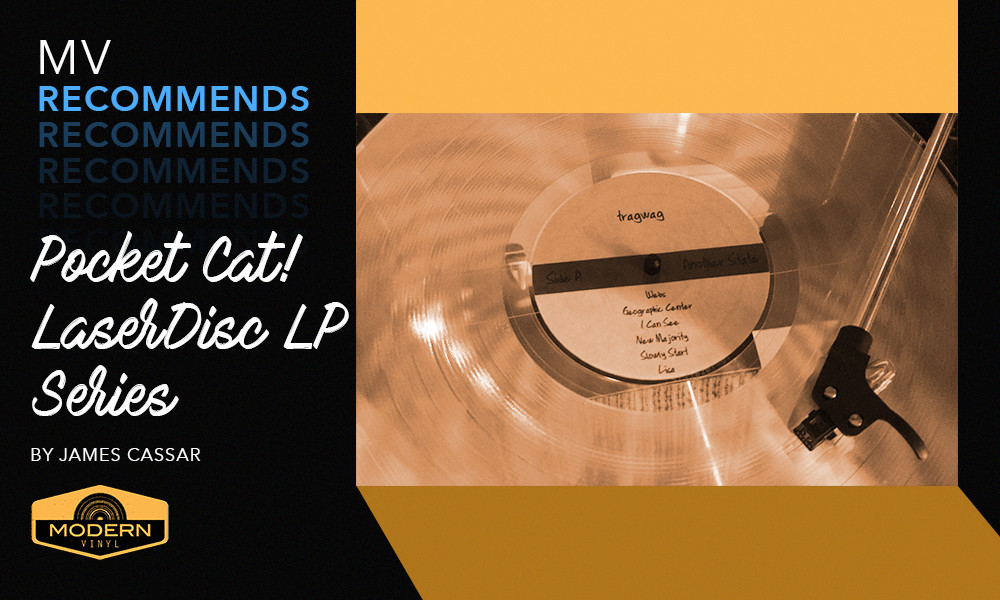 We at Modern Vinyl are fans of Tyler Bisson: he helped us bring our first podcast cut live to lathe vinyl, after all. In his latest excavation over at Audio Geography Studios, he’s tapped into what may be the final frontier of turntable media. LaserDiscs debuted in North America in 1978, tapered off in popularity rather quickly due to their high cost when compared to VHS tapes, and were succeeded by CDs, DVDs, and Blu-Ray Discs. Their relative obscurity in the home video market hasn’t deterred Bisson and his Pocket Cat! Records from attempting to find their grooves. In conjunction with Square of Opposition Records, Bisson brought the Philly band NAH their first LaserDisc title in 2015. With enough confidence and stock to start a series, Tyler’s TRAGWAG project — shorthand for That Really Awesome Guy With a Guitar — and its latest full-length, Another State, was the first to head to this dead format.

As LaserDisc LP Series entry #1, Another State is an enjoyable listen. Engineered and performed entirely by Bisson, it captures the uneasy nature of moving to a new place, finding new friends, and starting over. (Bisson moved from Connecticut to Tallahassee, FL.) TRAGWAG is shot through with the same snug indie smarts that made The Weakerthans so far-reaching and earnest, but isn’t without its DIY posture or shrieked backing vocals. The sound quality of the release, when spun in its unorthodox media, has a slight tape hiss purring in the background, but nothing unlike a lathe-cut offering. In fact, both Audio Geography’s lathe-cut vinyl and these LaserDiscs use the same hand-cut methods to offer superior sound.

Next up: Pocket Cat! will be releasing two LaserDiscs from Florida talent. The first, from Night Witch, will be available next week at THE FEST, with the 12″ version of Big Heet’s On a Wire released sometime in November. (Its cassette is currently available via Exploding in Sound.)

For those interested in another unconventional listening habit, head over to Pocket Cat!, where Another State‘s LaserDisc is close to selling out.