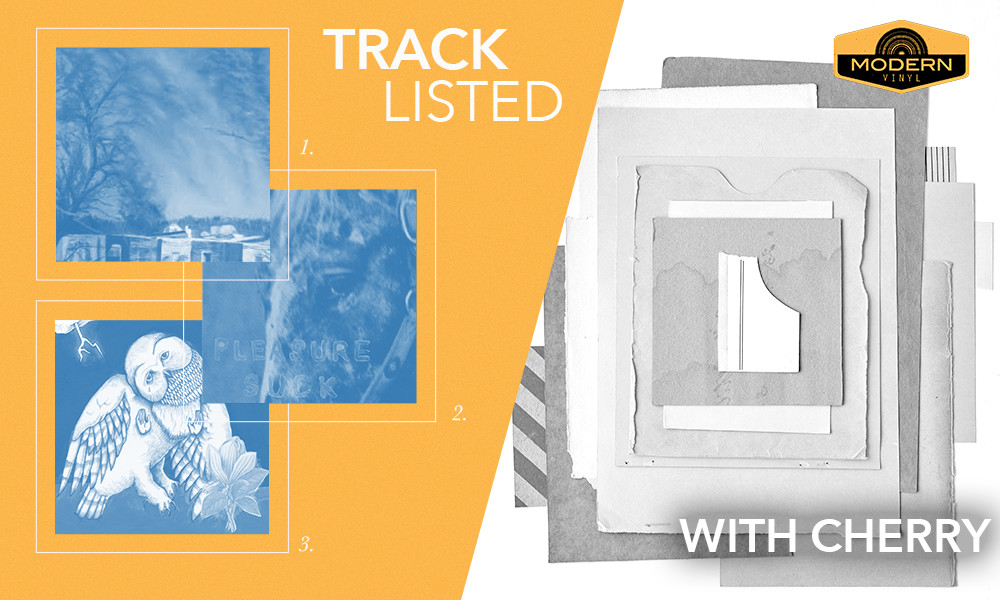 Featuring members of Modern Vinyl favorites Three Man Cannon, Kite Party, and even the Lame-O Records staff itself, Cherry is as much a product of Philadelphia as it is a reflection of the city’s continuing love of indie rock’s changing shapes. Take Dumbness, the project’s debut full-length. Picking up where Russell Edling’s Kite Party left off — pillowy guitar and all — the record drifts between existential dread and wishful thinking with seamless ease. It’s a record about being an artist, being inspired by other artists, and ultimately, delivering one’s latest artistic statement with as much integrity as possible. Edling gathered a brisk set of songs which shows off his latest physical (and digital) music purchases, showing that even the end of an album cycle can’t stop the creative process.

These are all songs from albums I have recently purchased. When I say recently, I mean from early September through mid-October 2017. Some of these records I got while Cherry was on our little tour supporting Dumbness. I don’t consider myself to be very “with it” when it comes to new music and stuff, but these songs have all been important to me and I will talk about that a bit more below.

This one was released digitally by my friend Matt Scheuermann. It was recorded and mixed by Matt Schimelfenig from Three Man Cannon. Matt also mixed our record and did some tracking on it. These songs mean so much to me because I actually recorded about half of a version of this record. Matt Scheuermann and I became fast friends a few years ago, and I released his first EP on cassette tape. (Modern Vinyl also reviewed that release. – JC) I was recording Surgical Pop on the same eight-track machine I recorded Cherry’s first EP, Gloom, on. It was sounding really cool and we were having fun doing it, though it was taking forever, mostly because of my scheduling conflicts. Anyway, the Matts were going to wrap up tracking and mix it up in the Poconos, and when they set up the tape and tried to listen back, the tape kind of just fell apart and the whole thing was lost. They had to completely start over. And hell, the new version’s a-frickin-mazing. So it goes!

Picked this record up the other day at one of my favorite record stores in Philadelphia, the Record Exchange on Frankford Avenue. I remember this spot used to be just off of South Street. I grew up in the NEPA (Northeastern Pennsylvania) coal region, and when I was a kid traveling to Philly, I would just go back and forth on South Street and go to the record stores, mostly Repo and Spaceboy. But then I was only buying CDs. I went to the Record Exchange and they had vinyl, and I was like “WTF is this” and left. HEALTH is a band that I heard about from by brother-in-law Chris. He has shown me a lot of cool bands I probably wouldn’t know about otherwise and I feel this is one of them. I love the coldness of the music contrasted with the thick warmth of the vocals. Maybe it’s a little dated now, but maybe I am too.

Japanese Breakfast — 12 Steps (from the album Soft Sounds from Another Planet, purchased Oct. 18, 2017)

I got this record when Japanese Breakfast played the First Unitarian Church. The Spirit of the Beehive is pretty much the best. Mannequin Pussy frickin’ rocks. Japanese Breakfast also rocks and this song has been stuck in my head for days. My girlfriend and I sometimes listen to records in the morning before I go to work – she is a freelance photographer and works from home – and we were jamming to this one the other morning. This song is great because its kind of a downer but it’s such a hooky pop song that you find yourself singing depressing stuff to yourself all day. That is a place I enjoy being in mentally…just saying.

The Velvet Underground might be the best band ever. I mean, I just like them a lot. They perverted pop music in such a perfect way that they humanized it. There is sweat and sugar and all that crap going on. Anyway, I was at Used Kids Records in Columbus, Ohio (go there if you can, it’s the best). Cherry was playing a show there on our tour, and this place has pretty much every record you could imagine. I got this record of demos from the Velvets and Nico and also White Light/White Heat. The record is not on Spotify, but they have a demo of the song “Heroin” on the record: its chaos, beauty, and repetition remain in my mind.

I really like No Age because they have always been interested in being artful with their music. I remember I bought their album Nouns (on CD) when I was in high school. It had this huge booklet glued into the jacket. It was such a beautiful object. I think at first I liked the packaging more than I liked the music. I was listening to mostly The Walkmen and Bob Dylan in 2007, so noisy stuff wasn’t really on my radar. This record, An Object, still has all the stuff that I love about No Age: walls of sound, dying computer sounds, fuzzed out everything. And it’s beautiful from a design perspective. I am a graphic designer person so any album that includes the typeface names in the liner notes is cool to me, unless it’s Comic Sans!

The Spirit of the Beehive — twenty first road trip (from the album pleasure suck, purchased Oct. 18, 2017)

I am being dishonest about this purchase date. I was lucky enough to have been sent the masters long before this record came out. So I had some time to listen to this thing and roll it over in my head. This record is beyond good. There’s not much else to say other than I love listening to it when I am walking to work. With my headphones blasting this record, I am transformed into a gigantic Godzilla-esque monster and I bash all the goddamn buildings apart and kick the bridge into the Delaware River. Kiss my butt, Earth.

Another purchase from Used Kids. This foolishly-named band is the afterbirth of another great band, Women. Women is rad as hell and both of their records are top notch. I love how angular “Bunker Buster” is, though, and how at odds it is with the beat (I mean…that is debatable, I guess). Anyway, this song was kind of the inspiration for the Cherry song “Waterfalls.” I wanted to do something similarly at odds with the rhythm. I haven’t been into much stuff by Preoccupations since this record, but this one has some heaters.

Last one from my spree at Used Kids (for real, go there). This song is like seven minutes long, and I listen to it over and over again. Beauty beyond words, so human, so flawed and fleshy and free. I am not even one of those Jason Molina disciples. I heard this song for the first time on a Spotify Discover playlist (like, how does Spotify know me that well?), and I immediately fell in love with it. Maybe you will, too? It takes me back to feelings I had when I was a kid for some reason; I can see the endless cornfields and hills closing in on me. I wanna get the hell out of Dodge, and maybe one day I will.

Dumbness is out now via Lame-O Records.