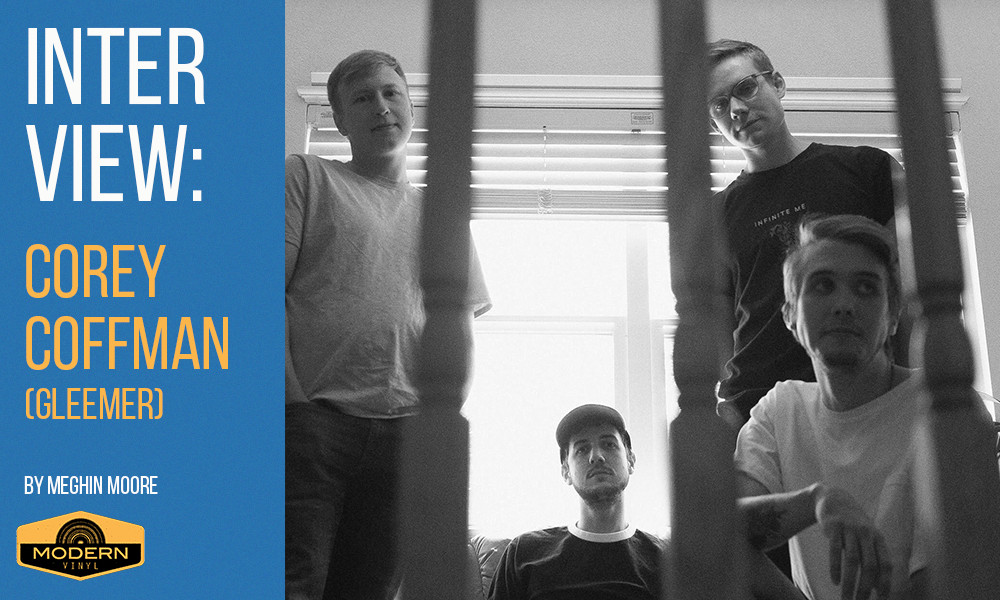 When we last spoke with Gleemer’s Corey Coffman, we learned about some of the songs that helped influence the making of Anymore. We went a little more in-depth with him after that, to learn about the inner workings of the album itself, the studio he set up at his parents’ home, teen dramas, and what drew him to the classic Smashing Pumpkins album, Siamese Dream.

Anymore is set for release on Nov. 17.

Modern Vinyl: Originally, Gleemer was started as a solo project. What prompted the change to take the project into a full live band?

Corey Coffman: Gleemer started as a solo project when I was living in New York, but I had the help of a real close friend from Colorado as I put the first album together. I’d record drums, guitar, and vocals and send them to him to add bass, percussion, etc., so it has always been a bit collaborative. After the first LP, I did the follow-up EP mostly by myself, but I still hadn’t played a single Gleemer show and I started longing for a real band. I didn’t really have anyone to work with musically in NY, so I moved back to CO — where I knew more musicians — to pursue the project.

MV: How did you and Charlie [O’Neil] first get acquainted, as both writing partners and friends?

CC: Charlie and I first met at a house show at his place. I was actually playing bass in a friend’s band for a one-off show. We got along really well, and he knew Gleemer. We started talking a bit at shows around town, and I found out he was this spectacular musician. Initially he joined as Gleemer’s bass player, then we ended up becoming roommates. As the lineup shuffled around, we became the two core members. I feel really lucky to have found him; everything I lack the capacity to do, he can do it. He’s really the other half of the band!

MV: “Anymore” was recorded at your parents’ house, which I find pretty cool! Why did you build a studio there?

CC: I didn’t so much “build” it as I used the existing space to treat (sonically) and fill with gear. Crazy enough, it’s a really effective floor plan for my needs, and the “live room” I use sounds really good. My parents have been so cool about it, and I can’t thank them enough. Ever since I got interested in recording at 14 they’ve let me use part of the home as my recording/mixing space for Gleemer and other bands.

MV: What sparked the idea to build your own studio?

CC: I’ve always been very interested in the science and art of recording. The actual creation of the albums is my favorite part of playing in a band. Nothing excites me more than recording, so it’s just naturally been what I’ve done for about 11 years now. It was less of an idea to do something, and more just what happened naturally because I thought it was cool.

MV: When describing the songs off of “Anymore,” you semi-joked that they were almost like episodes of a teen drama. If you could have your music featured on any teen drama, what would it be, and why?

CC: I’d probably have to say Friday Night Lights. I really loved that show. There are moments from it that still make me misty eyed when I think about them. It’s awesome to see so much emotion all twisted together. Feels like real life, although, I totally get if people think it’s cheesy!

MV: How did you take your own life experiences with your family and weave them into the fabric of what “Anymore” has turned out to be?

CC: I’m pretty veiled about direct personal experiences in my songwriting. I feel like if I start praising my own emotions as wonderful content for a song, then my songs will become trite pretty fast. I try to take the feelings I get from personal experiences and paste them onto fictional people or situations. While my own life may be the foundation for the emotional direction of a song, it ends up stirring more feelings than I intended because it’s not just about me.

MV: In the past, you’ve undertaken the effort to release albums on your own. What made you interested in releasing this record on a label? To go off that a bit, why Other People Records?

CC: Other People Records approached us last year about putting out an album with them. We met Tom from OP after a show in L.A. last October. He seemed really excited about the band, and we all got along really well, so we decided to give it a shot! Gleemer had already released three LPs and two EPs without a label at that point, so it made a lot of sense.

MV: In your Tracklisted, you mentioned that you never got into the Smashing Pumpkins until last year. What was it about “Siamese Dream” that ultimately drew you in?

CC: My co-worker actually started putting on Smashing Pumpkins in the warehouse during the day. I’d never been interested really, but songs kept grabbing me, and I’d say to myself, “Whoa, that was so sick.” I bought the CD and put it in my car, and it revealed itself to me over the course of a few months. That happens several times a year to me with an older artist. It just clicks, and you understand why they have legions of fans, but it also feels like they wrote the songs just for you.

MV: You also said that Hum didn’t make sense to you when you listened to them the first time. What was that “a-ha!” moment that caused everything to click with you?

CC: Same thing as above, actually! I bought the CD and let it play in my car over and over. I feel like you have to allow an album to get at you when you’re in various emotional states. It gives the subtleties room to breath! That record was insane to me. I felt like with each listen, a different song would spring to life. Now it’s one of my favorites.

MV: On your Bandcamp and Facebook pages, I’ve noticed the NCNG. What does that stand for?

CC: I forgot that was there! Years ago, a friend of mine came up for a sort of “catchphrase” (for lack of a better term) for our group of friends that played music. It means “No Coast No Goodbyes.” It was sort of our little Colorado callsign for a bit.

You can pre-order Anymore and Gleemer’s other LP, Moving Away, over at the Other People Records webstore. There’s a pre-order bundle up for grabs alongside standalone CD/LP preorders featuring your choice of a CD or LP with a longsleeve tee, as well as the CD, LP, and cassette with the longsleeve. The bundle features your choice of a black LP limited to 400 copies, or a grey/green LP limited to 100 copies.