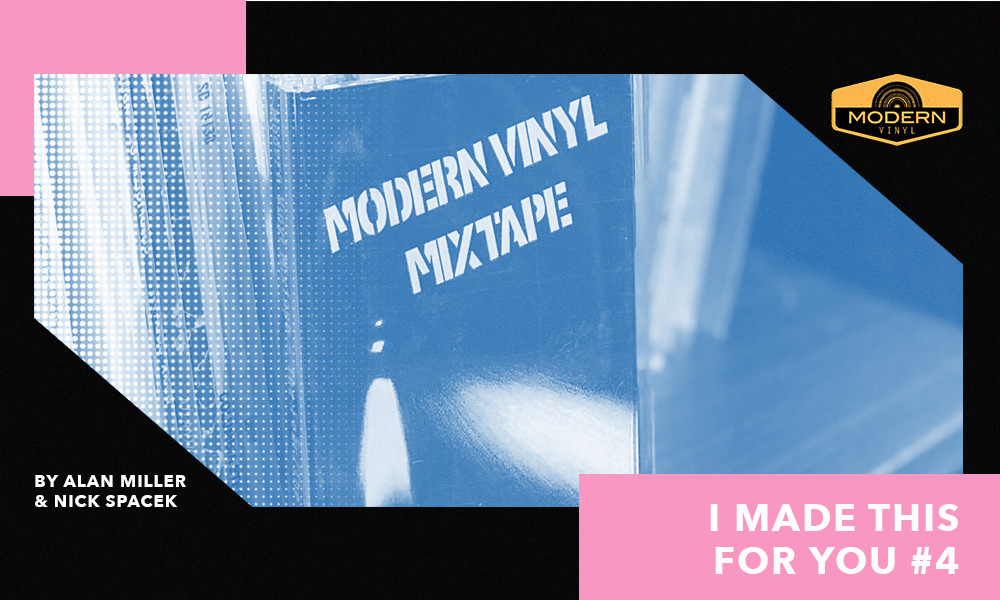 I Made This For You is a mixtape exchange series in which you’re dropped into email correspondence between members of the MV staff. Today’s entry, our fourth, has Alan Miller and Nick Spacek exchanging Halloween-themed tapes, separated into two sides….The Fear and The Fun.

So, Nick, we’ve worked together on album reviews in the past, but this will be our first mixtape exchange. Halloween is coming soon, so the theme will be: Side 1, The Fear; Side 2, The Fun. I’m formatting mine to fit on a C90 tape, so figure in 45 minutes of material for each side? We’ll both do a digital copy, physical tape is optional.

I know we both love spooky novelty music, so I’m curious if any of our picks will overlap — what’s your thoughts so far?

I really want the Fright side to be creepy as hell, and the Fun side to be something for all ages. The flip is going to be the thing I obsess over, though. How do you transition from goofy ’50s novelty songs to terrifying electronic music?

I actually went a different route for the fright side, picking stuff I found more unnerving than outright terrifying, so I’m super pumped to see what you come up with!

For the “fun” side, I’m thinking about the kind of things I’d love to hear at a Halloween party, with some fun interludes mixed in. As far as how to transition between the two sides, I have no idea, but I also think we both love spooky shit enough that it won’t really matter.

I’ve got a physical copy to send as well, but I’d love to get some initial thoughts on the choices and flow of each side.

I’m excited to hear this. I’ll have mine done by Friday, but the weekend and today have resulted in maybe 4 songs chosen.

Take your time, I just happened to have an extended break on Saturday/Sunday night.

I’ve been digging deep into the archives and finding some really unsettling music. This is basically a mental breakdown.

I’m hoping the “Fun” side will be a good antidote to the unsettling side, but knowing your eclectic tastes I’m sure it will.

Oh, it’ll be light as a feather.

Do you like songs about teenage brain surgeons? I have three.

So you’re saying the theme should have been “kid doctors” then? Damn, missed opportunity there.

Alright, so we’ve exchanged our digital mixes; ready to discuss?

Let’s start with Side 1, which is “The Fright.” I love that you opened yours with “L’alba Dei Morti Viventi” from Goblin; that’s one of my favorite songs from Dawn of the Dead and it opens the mix perfectly. After that little bit of familiarity, everything goes dark for me, literally and figuratively haha. I love the fact that you kept the dread building through the whole side — my favorites were the crazy drum and synth track at 13:15 and the wild vocoder thing at 20:50. I gotta get a tracklist so I can see what I was listening to ?

I’m still working on Side 2, so I’ll give you my thoughts on it later. Fantastic work on The Fright!

Got through Side 2 and it was a real psychobilly treat! Using Hitchcock to open and close was really fun; I think I might have that album but I forgot how good his delivery was. I looked up that “Corpse Grinder” song by The Meteors; I think they’re a band I’m going to have to check out because that song was one of my favorites.
The little vignettes you used to segue between tunes were well placed, especially the Jack the Ripper stuff (Karloff I think?). “She’s My Witch” is amazing, I’m sad that this is the first time I’ve heard it. That saxophone is gritty as hell with the vocals — I loved every second of it.

Fantastic mixtape all around Nick. I can’t wait to give it some plays while I work at the record store!

I love the fact that we both used Goblin on our Fright sides. The use of Foo Fighter’s cover of Gary Neuman’s “Down in the Park” is a nice touch. I’m fond of the Nick Cave & Dirty Three cut from that X-Files album, as well. That’s an underused collection of creepy tunes, and the same goes for The Guest soundtrack, which has probably my favorite two Survive tracks.

Did you intend to use organ as a theme on that side, or did it just work out that way because of the classic horror scores you used? The alternating between more “modern” pieces (or, as modern as 30 year-old musical pieces are when compared to 50 year-old ones) and traditional symphonic works really kept this ominous.

And then, we both ended up using horror hosts on our Fun sides! That Elvira LP is a gem, and I need to pull it out and play it more after listening to your side. I love the dance-y stuff you have. For whatever reason, I always get super Dr. Demento with mine and don’t get outside the box. That Freddy Kreuger track is especially fun, and the more I hear from it, the more I need to just suck it up and buy a copy, damn the price.

All the segues on my Fun side are old movie trailer 45s I found online about ten years back. I’ve don’t actually own any, because they are pricey as hell, but they tend to make an appearance on pretty much any Halloween mix.

How crazy is it that neither of us picked a song from The Cramps? Too obvious maybe? LOVE that Nick Cave song from X-Files too, and a big fan of that comp. As far as the Survive stuff, I’m in total agreement that the stuff on The Guest is their best work, but that was actually the Gatekeeper track that I put on the mix (and it sounds 100% like Survive, almost indistinguishable). The Survive tracks just didn’t have the Halloween edge that Gatekeeper had on that soundtrack.

I got lucky on that silly Freddy’s Favorites record — a guy on FB sold it to me in shrink for $20 a few years ago. It’s overall pretty terrible, but that’s also the charm of it I guess.

It makes it so much fun to use horror hosts on intro and outro. I’m glad we both thought alike in that regard.

I always feel like the Cramps are either too on the nose, or not quite spooky enough.

Also, I realized that we’ve both misidentified film score selections. That first cut is actually Fabio Frizzi, from City of the Living Dead. Strangely, I’d considered going with Goblin, but swapped it out due to runtime.

Oh yeah, of course it’s Frizzi! I love that song. I knew one of those synth tracks had to be from It Follows, I just couldn’t figure out which one. That movie scares the hell out of me, and the score as well. Thanks for including The Mummy on the Fun side; my wife and I have been walking up to each other and saying “I’m a mummy!” all weekend, haha! I love that one, such a fun and weird track.

We should definitely do this again.

Weird aside: of the various hip-hop Halloween tracks, which do you actually like most? There’s so few of them, and with two being about Freddy Kreuger, do you think that this is a realm which could be explored more? I mean, there’s obviously horrorcore as a genre, and Eminem kind of took elements of that for his early stuff, but it just feels like hip-hop’s early explosion flirted with it for such a brief time, despite coming up during the golden age of slashers.

Great topic. My favorite is actually “Dracula’s Wedding” from Outkast, from the Speakerboxxx/The Love Below record. That might be a bit of a cheat though, since it’s possibly more R&B than hip-hop. It really is odd though that most horror-themed hip-hop only happened in the late ’80s to early ’90s.

I think artists have a hard time letting loose and writing something for laughs, especially with all of the serious social issues plaguing people of color right now. That being said, Rick Ross’ song “100 Black Coffins” from Django Unchained might be a good example of mixing social commentary with a horror-ish motif.

I really miss the stuff like “Nightmare On My Street” and the Whodini track though; it’s so much fun to blast those songs around Halloween!

There is a Beans cut on one of his latest albums, HAAST, called “Super Bleak,” which is 1:40 of dark beats and audio from police shootings. It’s terrifying.

What’s the tracks on your Fear/Fun playlist? Send a mixtape to a friend and share music with each other. Please.


Tags: Halloween, I Made This For You, Mixtape